The D.A.Y. Kobe’s knee was better 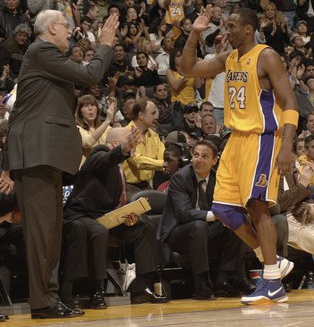 Mutoni and I were planning on having a live running IM conversation about the Lakers-Jazz game as it happened. I had to back out because I was sick and took some drowsy cold medicine. I watched part of the first half, which ended with Kobe easily getting to the basket and finish with a shockingly brutal dunk that got some of Kirilenko. What lingering knee surgery hangover? He had 22 in the first half, and I went to sleep thinking hey that’s pretty good, he’ll score 40 something. The last thing I saw of that game was Kobe being interviewed at halftime when he said “My teammates feed off my aggresiveness.” That’s when I aggressively went to sleep. Mutoni watched the whole thing and has a second half report here.

LA LAKERS 132 UTAH 102
The Player of the D.A.Y. has never been an easier decision. Kobe’s firestorm keyed a 79 point second half for the Lakers. Utah was not playing well, looking sluggish after the previous night’s big win over the Spurs, but still. KobeKB824Mamba won’t have to change back to the #8 jersey to get his groove back. 19 of 26, 4 rebounds, 3 assists. 19 of 26 shooting, 12 of 15 from the line. 30 points in the third quarter alone. Wow. And a high five and hug from Phil. The Jazz are supposed to be the best team in the league now that they beat the Spurs. And he did this to them, shades of the Dallas game from last year when he scored 62. I haven’t mentioned anything about the Utah Jazz or any other player on either team yet. That’s fine. They didn’t matter.

DETROIT 87 MIAMI 85
This was the most anticipated match-up of the year in the East for the past two years. Right now it’s not as exciting. Dwyane Wade came into this game playing some of the best ball of his young Mr. Perfect career, and um, he continued to play well with 8 assists and no turnovers to go with 5 boards, and he made a key block that gave the Heat a chance to tie on the last possession. Unfortunately Dwyane shot what looked like an airball and he suffered through a 5 for 23 game. Udonis Haslem helped him out with 20 and 10, but the Pistons are starting to roll, and have now won 7 in a row. Rip led the way with 24, Rasheed picked up a tech. It’s like old times for Detroit.