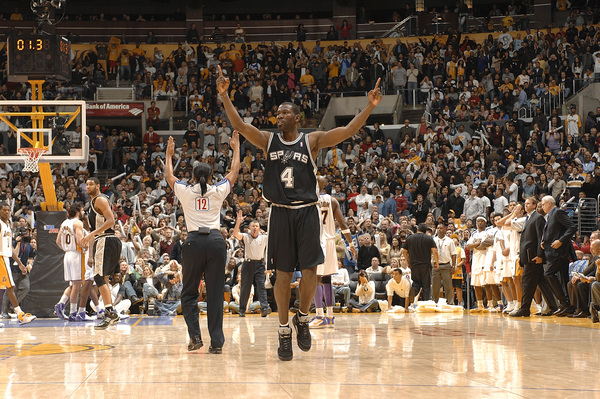 Since I don’t write this on weekends, I’d like to take a quick moment to say the name JAMAL CRAWFORD. 52 points against Dwyane Wade and the Heat on Friday night. Jamal is not afraid to take the game winning shot at the end of a 3 for 19 night, and he’s even less afraid to keep testing out his hot hand when he feels it. Basically, he’s the new John Starks. The Knicks were running plays for him, sending him off however many screens it took to get open. It actually looked like the Knicks had been working on those plays in practice or something. I didn’t think they did that. Anyways, if there was a Player or the D.A.Y. on Saturday, he would have been it. But there is no such thing.

SAN ANTONIO 96 LA LAKERS 94 OT
Playoff intensity on a Sunday afternoon in January. Gotta love it. Michael Finley hit a Horry-esque game winner in OT after Kobe hit a Kobe-esque jumper over Bowen at the other end. Is it possible that Finley can borrow others powers like Peter Petrelli on Heroes? Maybe I’m just too excited that Heroes is on tonight. The Lakers were up big for most of the game, then collapsed at the end of the fourth when the Spurs went on an 11-1 run capped off by a Bowen three. Kobe came back at the other end and tried to dunk on everyone that’s ever been to San Antonio, but it didn’t go down and he stood around yelling at the refs. The ball ended up in Vlad Rad’s hands (more Horry-esque action) and he drilled the three that would basically send the game to OT since Kob ended up getting snuffed out by Manu. Overtime was tense, with Kobe taking over and the Spurs hanging in there and eventually taking the lead on a Duncan layup. Kob hit the 8,000th huge shot of his career, but the Spurs came back by dumping to the Robot in the post, he drew the double team and calmly picked out Finley for the open look at the three, his fifth of the game. The Lakers couldn’t come up with a play to get the ball into Kobe’s hands at the other end and Vlad Rad couldn’t bail them out twice. The Spurs did not play well in this game, giving up open looks at threes, not playing very Spur-like, and all it took for them to win was that spurt at the end of the fourth and surviving OT. Impressive. Kobe finished with 31, 6, and 7. Duncan had 21, 14, and 9.

PHOENIX 115 CLEVELAND 100
So this is the NBA’s wet dream matchup for the Finals. LeBron the box score stuffer vs. the Phoenix non-defense. The player who has been pre-ordained to be a HOFer and multiple MVP with a chance to outshine the 3 time MVP (you know it’s coming) head to head. The black capitalist from America vs. the white liberal (Communist? Millionaire socialist?) from Canada who was born in Africa. LeBron and his “I’m waiting for the playoffs” attitude vs. Steve “Just because we never lose doesn’t mean we can’t play harder and get better” Nash. All of that kind of stuff. The way these teams match up though, it would be a short series. LeBron had 30 and 9 on a sore toe, Drew Gooden had 19 and 14, and the Cavs beat the Suns by 12 on the boards. The Suns only had 5 offensive rebounds, but that’s what happens when you shoot 57% from the field and 13 of 28 from three. A balanced attack, led by Nash’s 23 and 15. That is 17 straight for Phoenix.

MILWAUKEE 107 NEW YORK 105
This game was on tape delay in the NY area. Something to do with MSG being unable to show a game up against ESPN’s national game. That’s stupid. David Lee had 19 and 14 off the bench on 9 of 12 shooting. Let’s say hypothetically, someone wrote a little thing about him for a magazine that has deadlines such that many things can change before the magazine reaches the newsstand. If such a thing were to occur, it might dwell on the fact that David Lee comes off the bench, which is kind of preposterous because he is having a better year than Ben Wallace. Jared Jeffries and his contract and Indiana pedigree were finally benched by Isiah’s ego, but Channing Frye started in his place, or was it Q Rich? It’s hard to keep track. All I know is that Lee does not start for some reason. I don’t get it. Oh, about the game that wasn’t on TV. Crawford waited too long to carry the team, getting hot in the fourth but it wasn’t enough. Mo Williams dominated with 30 and 10, even hitting the game winner.

DETROIT 95 INDIANA 87
I didn’t watch much of this game because even with the brawl and playoff wars between them, this is the most boring “rivalry” in the NBA. These teams should never be forgiven for their 2004 Eastern Conference Finals series. In case you forgot, here are the scores from that series: 78-74, 72-67, 85-78, 83-68, 83-65, and the game that launched Detroit towards the Finals: 69-65!!! I don’t know why I’m choosing to dwell on that now. It just hit me last night. Jermaine O’Neal led Indy with 26 and 12. Webber had 17 and 13 for the Pistons who were led by Rip’s 21. CWebb also had a really cool play late in the game where he grabbed an offensive rebound, faked like he was kicking it out to reset the offense and run clock, then went right back up with the defense asleep. Webber might not be the athlete he once was, and he still has that crunchtime stigma lingering over him, but he’s still got a lot of saaaaaaavy and the proverbial high basketball IQ. Another fun moment was ESPN’s cross promotion of the XGames, where they did a head to head comparison of Rip and Shaun “The Flying Tomato” White.

WASHINGTON 105 BOSTON 91
The Wizards, who oh by the way are now in possession of homecourt throughout the Eastern playoffs, had to fight off the urge to have a let down after beating Detroit on Friday. The first half they couldn’t pull away, but they made it a blowout in the second half. Antawn Jamison led the way with 34, Caron Butler had 21 and 11, and Gilbert had an off-night but still scored 23. Delonte West had 22 and 11 with 3 steals.

LA CLIPPERS 98 SEATTLE 76
The Clippers scored 9 points in the fourth quarter… and won by 22 points. That’s what you call building an insurmountable lead and relaxing. This was domination. Sam Cassell hit all five of his threes, Elton Brand had 22 and 7, the Kaveman grabbed 15 boards and the Clips are turning their disappointing season around. The Sonics, uh, let’s just leave them alone.