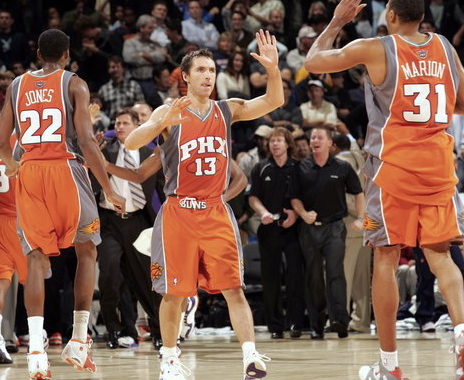 Before I get into writing about basketball, there’s a topic close to my heart that I’d like to talk about. That topic is Eli Manning.

Dear Mr. Manning, you effing suck! I am sick of your stupid “Manning face” and the way you basically drop into the fetal position when the rush is coming. You just turn away and fling the ball around recklessly. You’ve got Plaxico on your team. Just throw it up for him, man. The guy is getting frustrated and it shows. Of course it didn’t help when Plaxi Lady straight up dropped a 55 yard bomb that should have been an easy game-breaking 80 yard TD or how ever many yards it could have been. NY Post columnist Jeremy Shockey is on your team. He might not know how to shut his mouth, and he drops a pass now and again, but throw him the damn ball! Not 5 yards behind him. And not only when he’s in triple coveage so he can get decapitated. Eli, this is getting ridiculous. The Hater Nation enjoys calling you Eli Messiah and revelling in your sub 50% completion rate on many nights. Do not give them the satisfaction. Even worse, whenever you mess up, Khalid Salaam is allowed to feel a sense of enjoyment. I hate that. The thought of him smiling his way through a Giants loss, thinking up what slick little comment he’s going to say to me the next day, makes me want to throw up. It’s not even the comments. It’s his face and that look. I know, cause I gave him that same look yesterday after Donovan checked out for the season like half of the Giants team has.

The worst part of Eli’s night is that the numbers don’t reflect just how deeply and badly he sucked. On one play he ran backwards 20 yards and fumbled just for the fun of it, and the Jags ran it into the endzone. That was overturned cause of a cheap penalty. So lucky. At the end of the game, the Jags sat back and let him carve up their prevent defense to give him 230 yards on the night, padding his line with meaningless stats. That kind of padding could make Kate Bosworth look like Scarlett Johannsen. And yes, I am aware that those kind of sentences are only to be uttered by sportsguy and I’m going to get sued. I don’t care. Eli Manning has destroyed the rational side of my brain. He is driving me to MADNESS. MADNESS!!! If Tom Coughlin is too soft to get in his face, I’ll do it. This little brother stuff is not cute, Eli. You are the leader of this team. Be a man!

The two main voices of slamonline have been Lang and myself. He’s a Hawks fan, I’m a Knicks fan. Losers. And now we get to take that another step. He’s got Mike Vick. I’ve got Eli. Two #1 overall picks that are just killing their own teams. Man, was I ever pissed off last night. And then I had to watch Michael Irvin talking trash about how the Cowboys are the class of the NFC now, and he might be right. All because of Tony Romo. Boy do I hate Michael Irvin. I’ve hated on this guy for at least a solid decade now. The only thing worse than him is a Cowboys fan. Not to alienate any of our readers but I really do not like Cowboys fans. My high school janitor was a Cowboys fan. He wore his Irvin jersey to school the day after Michael was caught in that coke and strippers and intimidation thing. Okay, sometimes Cowboys fans are all right. Last night during the game Jay-Z was in the booth with the MNF stooges. (By the way, the Kornheiser experience is not doing it for me if anyone wants to now) He said he’s a Cowboys fan because his dad was. Unacceptable. Slap in the face.

PHOENIX 113 GOLDEN STATE 110
Baron Davis didn’t play thanks to sore ribcage muscles, so this game is tainted. The MVP casually hit the game winning three to beat the coach that gave him his first real opportunity in the league, just saying hey we’re the Suns and you’re the Warriors. J-Rich was unable to respond with a three or fake quote of his own. Raja Bell scored all 22 of his points in the second half, and the Warriors had all kinds of chances down the stretch and even shot themselves in the foot with a double lane violation. Monta Ellis scored a career high 31 for the second straight game and banged on Leandro Barbosa on a fast break along the way. This game was fast-paced as you might expect. Here’s to many more Suns-Warriors tilts in the future. Nash finished with 19 and 15, and the three headed monster of Bell, Nash, and Barbosa combined to hit 12 threes.

UTAH 101 TORONTO 96
The Utah Jazz! Paul Millsap changing shots. Deron Williams much improved in year two. Memo Okur continuing his great start to the season with 17 and 13. The Raptors came with balance scoring, but that was because Chris Bosh had an off-night. Carlos Boozer outplayed him, ending up with a beastly 35 and 9 on 14 of 16 shooting. Andrea Bargnani had his best game in the NBA so far, reaching double figures for the first time with 15 points in 27 minutes.

DALLAS 93 CHARLOTTE 85
Remember when the Mavs were 0-4? Me neither. They’ve won six in a row now, and they didn’t play all that well in this game. Jason Terry hit a big shot down the stretch, Dirk went for 24 and 14, and the Bobcats were the Bobcats. A franchise record 8 blocks for Emeka Okafor. Adam Morrison shot blanks, going 1 of 7 from three.

HOUSTON 97 NEW YORK 90
Jake and Russ will have another one of their epics from the Garden coming today. The only thing that matters about this game is that Nate Robinson blocked a shot attempt by Yao. Yao pretended like he got hit in the eye to hide from the shame. Nowhere to hide when a guy that’s 2 feet shorter than you blocks your shot. Who cares about the Rockets winning, Knicks losing, or anything else that happened in this game? NATE ROBINSON blocked a shot by YAO!!! The worst news from the game is that Kirk Snyder broke his hand and he’ll be out 10 to 12 weeks. He’s the next player slated to appear in the Player’s Ball section of the website. Slamonline jinx? First Baron Davis (after winning three player of the D.A.Y.s), now Kirk.

SEATTLE 99 NEW JERSEY 87
Luke Ridnour hit a big three off of a key block from Johan Petro. Yes you read that right. Petro had 3 blocks on the night, matching his season total. The Nets had the lead at halftime, but looked sluggish in the second half, getting outscored 54-36. Ray won the three point contest with Rashad 4 to 3 as they combined for 49 points. Kidd had an off night, possibly another player jinxed by the Player of the D.A.Y.

SAN ANTONIO 107 PORTLAND 98
Manu Ginobili treated this like a playoff game for some reason, and went 6 for 6 in the fourth quarter with his usual display of zig zags to the hoop and big shots. Tim Duncan was the one guy immune to the Player of the D.A.Y. jinx, as you’d expect, going for 25, 6, and 5. After the game Lamarcus Aldridge said “He is hard to defend.” Think so? Rookie. 23 and 8 for Zach, who didn’t snitch but picked up a tech.

MEMPHIS 95 ORLANDO 86
The Grizzlies won their second game of the year. Congrats. Hakim Warrick scored 15 in the fourth quarter to lead Memphis to the rare victory. Dwight Howard had the not-so-rare for him 20-20 night. 24 and 23 to be exact. Damn. Warrick led Memphis with 26 and 10. Did I mention that I’m pissed at Eli?