The D.A.Y. of Dallas and Phoenix playoff intensity 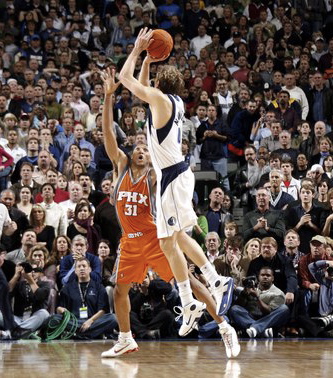 The Jazz are off to a great start. The Spurs are always the Spurs. Let’s not overthink this though. The two best teams in the NBA are Dallas and Phoenix. When they play each other, it’s one of the biggest games of the year. Throw in the Nash-Dirk friendship, the presence of Cuban, the ingenuity of D’antoni, and the history of these teams meeting in the playoffs twice in a row already, and we have a serious rivalry on our hands.

DALLAS 101 PHOENIX 99
The Mavs came into this game on a 21-3 tear and the Suns had won 16 of 17. Somebody had to lose. The first 46 minutes of this game was pretty cool. Entertaining basketball with Jason Terry going off when he was left wide open. Dallas made sure it didn’t turn into a wide open 158-156 shootout. The final 2 minutes or so were playoff atmosphere crunchtime ball at its very best. Dallas down by 2, Josh Howard leading a break, finding Jason Terry wide open for three with a perfectly crisp pass in transition, the Mavs go up by 1. Some free throws were exchanged, Dirk hitting 2, Amare hitting 1. Phoenix down by 2, with 1:07 left, what do they do? Something conservative to make sure they don’t turn it over while getting a quality shot? How about Nash throwing a lob to Amare for the hammer over Josh Howard and his 12 foot long arms? I jumped off the couch on that one and yelled out loud. It’s too bad Steve is so much older than Amare, cause their pick and roll with the bounce pass is absolutely Stockton-Malone perfect. They probably only have 3 or 4 more good years together cause of Steve’s age, but that’s a play that could last a decade plus. After some back and forth turnovers including Raja Bell unable to get the ball to Nash with Howard denying, The Mavs came back with Terry finding Josh with a perfect strike for the layup to give them the lead. The Suns, with one shot to tie or go for the lead put the ball in Nash’s hands. He drove and looked like he had nowhere to go. Nearly trapped on the baseline, he would have been dead on a game-ending turnover if he wasn’t Steve Nash. Intead he threw a perfect bounce pass to a wide open Shawn Marion under the hoop for the layup. Tie game. Not much time left. Dirk had it in his hands, and you’d think he would let the clock go down to the buzzer for the winner. He was open enough to just take the shot in rhythm. Wet. Dallas by 2 with 1.6 left. The best the Suns could do was get it to Amare for a 22 footer that didn’t go. PLAYOFF INTENSITY! The Western Conference Finals are going to be off the proverbial chain. Terry led the Mavs with 35, Dirk had 27 and that game winner. Nash had 24 and 13 and Amare had 25 and 13.

DENVER 112 SEATTLE 98
Seattle, you were just spectators. Nice effort from Gerald Wilikins’ son Damien with 26 points and the audacity to steal the ball from A.I. in the first quarter when he wasn’t looking. Now for the Nuggets. They played a lot of this game with maybe the shortest and lightest backcourt ever. Iverson and Boykins. Allen racked up his 77th (!!!!) 40 plus game with 44 points. Earl had 24, and nobody else on the Nugs reached double figures. 18 boards for Reggie Evans, and Iverson threw in 10 assists and 9 turnovers. Do you see what Allen is doing here? He’s making the game easy for the guys around him. It’s clear that he is the superstar, and Earl has been dominant since he arrived – and since Coach Karl has been forced to play him more with the suspensions and injuries limiting his options. The Nuggets players are figuring out that they have roles to play other than trying to score themselves. It will be interesting when Melo and Camby and JR come back, but right now this is an Allen Iverson type of team. George picked up career victory #800.

SAN ANTONIO 106 UTAH 83
This was still a pretty big game, but not as big as it would have been a few weeks ago. The Spurs cranked up their defensive intensity and handled the Jazz pretty easily. Jerry Sloan was impressed “Those guys gave us a lesson on how to play basketball tonight.” Pop was proud “I recognized the team that was out there tonight.” Tim Duncan had 20 and 9 with 3 blocks and Boozer was held to a 2 of 10 shooting night. Tony Parker led the Spurs with 22 on 9 of 15 shooting.