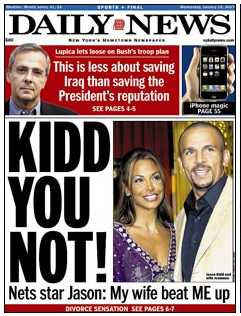 First a quick thought on the Kidd divorce. Ugly, ugly days out in the swamp. It really says something about the way sports is covered that the New Jersey Nets were playing exciting basketball for years and it received less local coverage than the boring to disasterous Knicks, but as soon as some off the court personal stuff happens, they’re front page news. Check out the FRONT page of the NY Daily News today.

Wait a second. Mike Lupica is writing a political advice column? This has international incident written all over it. But back to Kidd. What am I supposed to do? Respect his wishes to not delve into his personal life and focus on basketball? It’s a good thing he doesn’t play baseball, cause with the moral highgroundalizing (I invented that word. Don’t swaggerjack it) that’s going on today, he wouldn’t make the Hall of Fame anymore. But do we pay attention to this, or just let the Kidds be? It’s not like they were just some quiet, innocent couple that was forced into the limelight. Joumana was once a key story line of a playoff series. Their son is a bigger NBA child star than L’il Dun or Mister Allen Iverson. This is public property. I don’t know what to do. Let’s talk about basketball, how about that? DALLAS 108 UTAH 105
“It’s personal. They don’t like me and I don’t like them.” Those are the words of Jerry Stackhouse about the Jazz, and when quotes like that are generated, you know it was a good game. Another amazing quote, this one from Avery Johnson on Memo Okur’s failed three point desperation heave at the end “Have you ever eaten red beans and rice? Okur was the rice and we wanted to be the beans and be all over him. He’s a great shooter. We wanted to stick with him as close as we could.” What? Stack talked smack to Jerry Sloan and got called for a flagrant on Collins the lesser, said goodbye, then Dirk carried the load with 38 points to get the W. Boozer led Utah with 29, and… okay, one more quote from Stack “They’re going to hold and grab try to play a fake physical game.” Easy there, old man. How about those physical and feisty Dallas Mavs? Are they becoming the new villains of the NBA? Gotta have villains.


NEW JERSEY 101 TORONTO 86
The funniest part of this game is that first place in a division was on the line. The Nets won, they’re in first place. Jason Kidd had 14 assists with just 2 turnovers, Vince had 32, and the Raptors, well at least Bargnani had a decent game hitting 4 of 7 threes. The Nets are now a half game up on Toronto for first place in the Atlantic. Gross.

INDIANA 91 ATLANTA 72
Lang’s been busy doing magazine stuff lately, so he hasn’t had a chance to really get into this, so I’ll say it. The Hawks are as bad as they’ve ever been. There is no reason to ever have hope for this team. Am I wrong? The high scorer was Speedy Claxton. With 12 points. They shot 32% from the field. Atlanta has one more win than Philly, Charlotte, and Memphis. Al Harrington scored 18 and Jeff Foster grabbed 17 boards.

CLEVELAND 108 SACRAMENTO 98
The Cavs were down 17, LeBron started nailing threes, and they scored 60 points in the second half, pulling away for an easy win. Do not make LeBron have to play hard, because he will bury you. He’s saving his energy for the playoffs and the Cavs are still winners of 8 of 10 and 5 in a row. Bron finished with 34, Drew Gooden added 21 and 11 and Kevin Martin had 23 and 11 for the Kings.

MEMPHIS 128 LA LAKERS 118
Tony Barone. Has one team ever had such a drastic style of play shift in the middle of a season? 46 points in the third quarter sent the Lakers starters to the bench for some early rest. Pau Gasol is back, with 25 and 13 and 3 blocks in this game. Kobe played only 29 minutes, scoring 25 of his own. I’ve got nothing againzt the Czar, but I like Tony Barone’s style.

PHOENIX 113 SEATTLE 102
Ray Allen had 25 and 9, Marion 29 and 15, Nash 27 and 11, yada yada yada blah blah blah… hold… on… Linkstigator Nick Collison had a 29-21 night. 8 offensive boards. Yes Nick! That is monstrous! It was in a loss against a team that will give up a million rebounds, but still. Didn’t hurt the Sonics lottery balls. Great game.

DETROIT 98 PHILLY 89
For some reason, the 76ers can not stop Tayshaun Prince. He had a career high 33 in the win, picking up the slack for injured Chauncey. Rasheed didn’t start as a disciplinary measure for being late to practice. Chris Webber didn’t play either. Whatever. The rumor is that the Sixers want to buy him out. That’s a hell of a golden parachute for CWebb. Do the Sixers even have that kind of money in the bank? How do these buyouts work, do they cut a check for $18 million or whatever it’s going to be? Swiss bank accounts? Electronic transfers? Armored cars full of cash? Robbing Chris Webber, anyone? Oh back to the game. Samuel Dalembert had 14 and 17 with 4 blocks, and their new executive VP whose golden parachute wasn’t nearly as golden as Webber’s was watching from a luxury box.