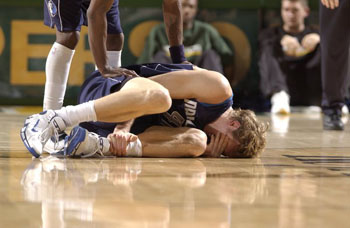 I’ve already written about David Lee’s big tip, right in Michael Jordan’s face. He’s had so many big moments at MSG at the Knicks expense, it was nice to see it go the other way for once. It turns out there were many other games across the league last night, and here are some blogger recaps. First the Whitaker two-step.

UTAH 112 ATLANTA 106
As Lang mentioned in The Links, the Hawks utterly collapsed and gave the game away to the Jazz. The Jazz outscored the Hawks 40-13 in the fourth. Mutoni has a link to some Josh Childress video on his Fanhouse blog. Looks like J-Chill is on his way off the chilling list, and they need him.

NEW JERSEY 113 CLEVELAND 111
Lang was at this game (hence the Whitaker two-step). So was Jay-Z, Ciara, Missy, and Chubby Checker. Do the twist, baaaby! Vince beat LeBron 38-37. Up next for Vince: Kobe tomorrow night.

NBA FANS 1 PHOENIX and DENVER 0
Actually there are no losers here. Iverson needs to be on the floor to make his Denver debut when these two teams meet up. Good lookin’ out with that snowstorm, God.

NEW YORK 111 CHARLOTTE 109 2OT
Take that, MJ. You’ve got your special one in a hundred billion life, your money, the respect of every person on the entire planet. We’ve got this game.

ORLANDO 86 NEW ORLEANS 83
Very numbers oriented breakdown from the Orlando Magic Blog. By the way Chris Paul dunked on Dwight Howard. Must… track down… video… I hope to have something after lunch on this dunk.

INDIANA 101 PHILLY 93
The Sixers lost their 12th straight and are thinking about bringing Larry Brown back. I think we should boycott the Sixers.

GOLDEN STATE 96 BOSTON 95
Happy recap from GSoM. The Warriors didn’t blow it. Al Jefferson had 13 and 11 in 28 minutes. Perk is a Beast is getting ready to commit adultery.

LA LAKERS 111 MINNESOTA 94
The T-Wolves were outscored 34-7 in the fourth quarter. That’s more like what is going to happen to the NY Giants this weekend than what should be a quarter of NBA ball. Lakers blog describes the shock and awe from this game.

SAN ANTONIO 105 MEMPHIS 98
Welcome back Pau! Now follow up your first win of the year by facing Duncan and the Spurs. Timmy Robot was 8 of 8. Even with Gasol playing this is still a mismatch, and the Spurs did not play all that well on their way to the W.

TORONTO 98 LA CLIPPERS 96
Good win for the Raptors. A great win for them! Or as Clips Nation puts it, “A new low.” For the Clippers. Wow.

MILWAUKEE 121 MIAMI 95
Mo Williams had a triple double and the Heat felt the pain. Blown out. 28 for Michael Redd. A quick thought: Isn’t it funny how the holy trifecta of LeBron-Wade-Melo keeps getting lock of hall of famers added in? Wade got Shaq, Melo got A.I. What’s next for LeBron? KG to Cleveland?

PORTLAND 89 HOUSTON 87
Two players having the best statistical seasons, the only two guys in the league averaging 25 and 10 (if you round up slightly). Yao and Z-Bo. Yao scored 34, grabbed 9 boards and blocked 5 shots. Z-Bo had better rebounding numbers, Brandon Roy hit the big shot and the Blazers got the win. FIVE straight wins for the Blazers, and their fans got to boo Bonzi.

Alright, lunchtime. When I get back I’ll look for the Chris Paul video.