The D.A.Y. of Gilbert from 32 feet at the buzzer 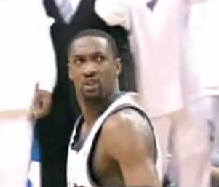 No conscience. Gilbert Arenas is more than an assassin. He murders entire families including women and children, he chops up the bodies, burns off the skin, and buries them at the bottom of the river. Uh… basketballwise. What I mean to say is that he’s a cold blooded killer, plain and simple.

WASHINGTON 108 MILWAUKEE 105
Gilbert had 32, 11, and 8. Michael Redd scored 27 on 23 shots, while Caron Butler had 29, 9, and 7. Skip all that and let’s get to the main event. Game tied, Gilbert brings the ball up, has time to get a good shot. Catches Charlie Bell sleeping on the 32 foot bomb. HIBACHI! or GUARANTEED! Or whatever he’s saying these days. Here are some quotes from Gil on that shot. “Once I let it go, I’m like, ‘That’s in. I don’t even need to look at this one.” “I don’t know why this is a surprise to you guys now.” And of course “My swag was phenomenal.” Yes it was. Yes, it was.

PHOENIX 100 TORONTO 98
Chris Bosh came back from his 12 game injury hiatus, which felt like 40 games. The Raptors were tied for first place in their division without him, and now that he’s back, they’re 0-1 and are out of the playoffs. Steve Nash had an off night until the fourth when he scored 13 of his 15 and made about 8 billion huge shots in a row. Bosh had a 26 and 14 night. Not bad for someone that should be out of rhythm. When Bosh last played, Bargnani still hadn’t done much. In this game he hit 4 of 4 from three on his way to 17 points. The inside out fronto court of the future? Or did they just put up easy numbers against the Phoenix “D”? Not the best move by Bosh to foul Nash on a three and give him 3 free throws in crunch time. This was the second game in a row where the Suns didn’t play that well and still won.

MEMPHIS 144 GOLDEN STATE 135
The Grizzlies have a head coach named Tony Barone. He is nothing like Mike Fratello. Observe the score of this game. That was not in triple OT. This was 48 minutes of run and gun and run some more. Nobody was walking the ball up. Nobody was playing defense. Everybody was raining three balls on both sides. Mike Miller, 9 of 12 threes on his way to 33 points. Matt Barnes, 7 of 16 threes on his way to 36 points. Damon Stoudamire had 18 and 16, Baron Davis had 22 and 13. So… these crazy high scoring games we’ve been seeing weren’t all about the new ball. Stro Swift had 26 and 9. Gasol, 24 and 13. Numbers, numbers, NUMBERS!

MINNESOTA 103 SAN ANTONIO 101 OT
KG got the best of Tim Duncan. Rare. Timmy had 23, 13, and 5 with 5 blocks. Kevin with 27, 17, and 7 with 3 blocks. You thought it was all about them? They fooled you. It was about Trenton Hassel playing D on Tony Parker and grabbing a key rebound, as well as Matt Bonner missing a three for the win. Hippie. Mark Blount led all scorers with 28 and Manu had 26.

NEW YORK 99 PORTLAND 81
Eddy Curry. 27 points, 10 rebounds, ZERO assists. So he is the new Patrick Ewing! The Blazers gave up a lot of dunks. A lot. Z-Bo was held to 15 and 9 and the Knicks found a way to snap their West coast road losing streak.

HOUSTON 106 SEATTLE 93
T-Mac is back. Normally the words “T-Mac” and “back” are not a good combination, but he’s got three straight 30 point games, with 31, 7, and 6 in the game. Ray Allen had 32 in the loss for the Sonics, but the best stat line goes to Danny Fortson. Eight minutes, no stats other than 2 boards and 2 fouls. Fortson-esque. Rockets starting center Dikembe Mutombo (!) grabbed 12 boards.

UTAH 98 PHILLY 87
The Sixers got their emotional win over A.I. the other night. So, they’ll probably take a break from the win column for a while. The Jazz got off to a slow start but Boozer had 22 in the second half, finishing with 27 and 14. Deron Williams had 14 assists. Andre Miller led the Sixers in field goal attempts with 14, scoring 17.

LA CLIPPERS 110 MIAMI 95
The Clippers won a road game in the house of the defending champs. That’s great. Elton Brand had 28. Corey Maggette had 16 and 11, but the best part of the game is simply listing the Heat starting 5.

Kapono led the team with 19 hitting 3 of 3 from 3. Zo had 16 and 7 with 4 blocks. Um… if the defending champs can’t make the playoffs in a comically pathetic conference, then something’s wrong. Even if Shaq thinks he’s going to give this team a lift when he returns, he’ll be out of gas by April. Dwyane Wade has lived a charmed NBA life so far. It came too easy to him. This is what you call crashing back down to earth.