The D.A.Y. of Iverson and Carmelo together 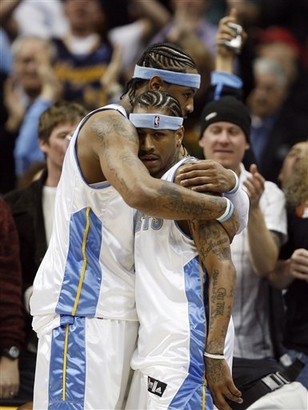 There are 4 non-sports TV shows that I care about watching regularly. Two of them are on Thursday Night: The Office and 30 Rock. Two of them are on Monday night at the same time. 24, which was bonkers as always, and Heroes which made its glorious mid-season return. While both of those were airing, A.I. and Melo made their joint debut against Toney Barone(y)’s Memphis Grizzlies. It involved some remote control trickery, but I got to watch all of both shows and some of the game. Please do not post irresponsible 24 spoilers in the comments, unless you give a SPOILER WARNING first. That should be standard etiquette by now.
DENVER 115 MEMPHIS 98
I don’t know how much we can take from this game, since it was run and run and run and gun Memphis. A.I. and Melo did not have a power struggle, they each had some highlights, there was an oop from Allen to Carmelo, and Marcus Camby grabbed 17 boards and hit a bunch of wide open jumpers for 17 points. Pau Gasol had 23 and 17 in the loss, but the story of the game is that it’s a new beginning for the Nuggets. 28 for Melo, 23 for A.I..

LA LAKERS 108 GOLDEN STATE 103
Kobe hit the key shot, scored 42, and the Lakers absolutely OWN the Warriors, new roster and all. Sarunas Jasikevicius hit a big shot, Al Harrington scored 30, but the Lakers with their depleted front line have been a dominant home team this season. Lamar Odom and Kwame Brown could both play on Friday. Here’s the weird side note about the game. It was the one year anniversary of Kobe’s 81 point explosion. He claims that was special to him because the 81 pointer is the only game his grandmother has ever seen him play professionally. He’s played in over 700 regular season games. Maybe she needs to go to more games. What are the odds of her going to watch her grandson once and him scoring 81 on that night? Golden State of Mind takes on the Warrior perspective which I seem to have left out.

UTAH 106 MINNESOTA 91
Deron Williams ran the offense to perfection down the stretch, operating at max efficiency with Boozer. Jerry Sloan was probably having deja vu flashbacks and could not possibly be any happier. While the Jazz went to cold blooded execution to get buckets, the T-Wolves went in the exact opposite direction. Ricky Davis on a roll. He scored 32 including 4 of 8 threes. Deron Williams had 21 points and 15 assists.

SACRAMENTO 88 NEW JERSEY 87
Here’s the good news for the Nets: Jason Kidd had another triple double Mikki Moore hit all 8 of his shots on his way to a career high 22, as the Nets built a 20 point lead. That is all for the good news. Mike Bibby, who couldn’t hit the proverbial side of a barn, got hot and carried the Kings with their last 15 points to get them the win. Ron Artest had a shaved head, so the mohawk era is over. Kevin Martin was ice cold, Ron was chucking, and the Nets still found a way to blow it. With no RJ, the Nets will need to lean on their leading scorer for more production. Let’s take a look at Vince’s line: 4 of 11 for 8 points. 5 assists, 5 turnovers. Sloppy game all around.

TORONTO 105 CHARLOTTE 84
It’s hard to imagine the Raptors as a team that can win a division title, but the Nets have left the door wide open for them. Sam Mitchell could keep his job while Lawrence Frank loses his. Amazing. Mitchell called for the zone D and the Bobcats had no idea how to attack it. That’s strange since the whole team is basically a bunch of college kids. The Cats scored 8 points in the third quarter. Gerald Wallace led them with 19 and 9. Jose Calderon got the start for an injured T.J. Ford and came through with 19 and 11.

MIAMI 101 NEW YORK 83
The Heat didn’t have Wade or Shaq. Early in the first quarter, they went on a 27-0 run. I’ve got nothing more to say about this game. Your New York Knicks.

ORLANDO 90 CLEVELAND 79
The Cavs are tired from their west coast trip. Many people seem to be accusing LeBron of taking it easy during the first half, saving his energy for the playoffs. You know, like 90% of NBA players. LeBron sees it the other way “It was tough. It was one of those games you try to forget about. We’ve got to get some rest. Everybody’s sleeping pattern is off.” I hear you LeBron. Sleep is underrated. So the Magic took advantage of the sleepwalkers and were led by Grant Hill’s 22 and Dwight Howard’s 18 and 13. At one point in the game, Brian Hill smashed his clipboard during a timeout. That got Orlando going, but it must have been annoying to the Cavs, cause they were just trying to sleep. A breaking clipboard can not be a pleasant alarm clock.

INDIANA 98 CHICAGO 91
Ben Gordon scored 31 points, which happens from time to time. Darrell Armstrong came a few rebounds shy of a triple double, which should NEVER happen. Jamaal Tinsley, you better get back to work. Tinsley missed his first game of the year, and this is how his back-up repays him. The D.A. controlled the game, so much that Gordon and Hinrich each got T’d up. Jermaine O’Neal had 22 and 10.
SAN ANTONIO 93 BOSTON 89
Al Jefferson was a beast with 26 and 14, Delonte West had a career high 27, and the Celtics nearly pulled off the upset with a late 13-0 run. But, Michael Finley hit some free throws and that was that. 21 and 9 from the Robot, as the Spurs are on autopilot.