The D.A.Y. of Iverson vs. KG and other depressing events 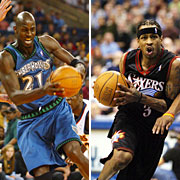 Alright. I suffered through yet another debacle at the hands of my football team yesterday, making this the fourth straight week of depressing Monday (and Tuesday through Thursday) posting. I won’t waste your time for another second going over what went wrong. That team has wasted enough of my time that for me to keep mentioning them is taking my personal problems out on others. That’s not right. Monday. Let’s do some work.

MINNESOTA 95 PHILLY 84
Two of the big questions of the offseason were 1) Why don’t the Sixers and TWolves ever get real help for Iverson and KG? and 2) When are these two HOFers going to be traded? They’re still around with their original teams, Iverson’s wisdom teeth broke down before his body did, which was unexpected, but other than that its more of the same. Actually KG had help, in the form of Ricky Davis (22 pts) and Mike James (20). The most help AI got was 15 from Samuel Dalembert – who had 9 boards and 3 blocks. The showdown between the superstars went KG: 15 and 14 with 6 assists and Iverson: 26 and 7 on 6 of 19 shooting. Here’s a trivia question. Iverson, Garnett, and Kobe are some examples of the best players to stick with one team for a whole decade. Who is the worst player in the NBA to stick with the same team, now in his 10th year with them? Hint: He was to the Patriot League what Greg Oden will be to the NCAA (for only a year though. The answer to the trivia question went to school forever).

LA CLIPPERS 116 ORLANDO 91
Elton Brand, 31 points on 12 of 14 with Dwight Howard on the floor. Take it easy old man. Shaun Livingston with 10 assists. Slow down young man. The Clippers were slightly peeved after a home loss, and they took their frustration out on the Magic. This was a blowout.

CHARLOTTE 97 DETROIT 89
Weird. The Bobcats had plenty of energy going up against a good team once again, and that was enough. Brevin Knight had 14 assists and Emeka had 18 and 8 with 2 blocks. Chauncey Billups said that jumping out to a 9-0 lead should have been enough for the Pistons “Most times when we’re playing a really young team and we’re an elite team and then we jump on a lead like that, most teams could pretty much give up. They didn’t, to their credit.” Elite? The Pistons would be like the 10th best team in the West. Anyways, nice of Chauncey to accept the blame, but the Pistons bench gets it here, contributing 14 points. The red hot Sean May had 17 points of his own off the bench for Charlotte.

ATLANTA 107 PORTLAND 96
Joe Johnson 33, 6, and 6. He does that. Zach Randolph, 30 points. Him too. Josh Smith, who was poked in the eye Friday night, wore goggles. They didn’t seem to bother him on his way to 13, 12, and 6, and a Josh Smith block on a Martell Webster shot. I think this says it all about the Hawks of the late 90’s until now: this was their first win at Portland since 1997 and they’d lost nine in a row to the Blazers. Some of those losses were against the Paul Allen fantasy basketball lineups, but not all of them.

Okay, one mention of something concerning my football team. The NY Post has a headline on their front page “Another Nail in the Coughlin.” That is excellent.