The D.A.Y. of Jazz without Booze 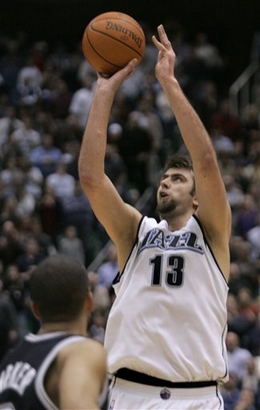 My soon to be ex-roommate spent the night packing up his stuff, and my living room was and still is a mess of boxes and surfaces you can’t sit on. The television is out of bounds and there is literally less than 12 inches of space to stand anywhere in there, so I was unable to watch anything. Right now as I type this, he has professional movers doing their thing. I personally find the experience of carrying furniture up and down steps to be one of the very worst parts of life. These guys do it every day. They are my heroes.

Last night I was reading Pistol, one of the two new Pete Maravich biographies. I just so happened to read the chapters about his career at LSU where he was the all-time leading scorer in college basketball history. I went to bed, and when I woke up this morning I found out that Kevin Durant had a 37 and 23 game against Bobby Knight. Coincidence? He’s making a run at best College Freshman ever.

TORONTO 119 WASHINGTON 109
The Raptors played maybe their best game of the season, shooting nearly 60%, getting pure domination from Bosh’s 34 and 8 and starting PG Jose Calderon’s 24 and 11 on 10 of 13 shooting. They used a 43 point third quarter to put this one away and Gilbert made the score not look so bad with some garbage time buckets. Antawn Jamison is the latest All-Star level player from the East to miss extended time with an injury.

UTAH 97 SAN ANTONIO 93
Oh, is Carlos Boozer supposed to be an All-Star this year or something? The Jazz started JARRON COLLINS and beat the Spurs. San Antonio got very little from players other than Duncan and Parker. 25 and 12 with 5 blocks for Tim. Memo Okur stepped up for Utah with 31 and 11. He scored their last 8 points but the team was raving about Rafael Araujo’s defense on Duncan. I guess it could have been much worse than those 25. With no Boozer, the Jazz outrebounded the Spurs 50-32.

ATLANTA 115 GOLDEN STATE 94
Here’s a whole paragraph from the AP recap: The Hawks won for the fourth time in five games to post their first winning month in coach Mike Woodson’s three years. The 8-7 January record is Atlanta’s first winning month since a 4-3 mark in April 2004. So this is what it’s like to live in the golden era of Atlanta basketball. Joe Johnson’s push to make the All-Star team is translating into wins for his team. Another 30+ game for Joe as the Hawks ran up 70 points in the first half then held Golden State to 38 in the second half. The Warriors seem to be on All-Star break vacation already.

LA LAKERS 111 BOSTON 98
Ben Collins and Kobe Bryant were both at this game. I expect Game Notes to come in later today. Kobe heard an MVP chant from the fans that are supposed to chant “Beat L.A.!” and have one of the great generation gap bridging rivalries of sport. Let’s just hope Red wasn’t watching. The Celtics are 2-19 since the Paul Pierce injury. I looked it up and Doc Rivers was 1-10 with Orlando the year he was fired (including an opening night win against the Knicks of course) which became 1-19, and part of that losing streak was an injury to T-Mac. Eerie. The reward for that season was Dwight Howard.

CHARLOTTE 104 NEW YORK 87
David Stern should have suspended Gerald Wallace for something. He did not and the Knicks were embarrased by the Bobcats again. If David Lee’s not tipping in miracle buzzer beaters, the Knicks can not beat Charlotte. 42 for Wallace, a nice 1st quarter for the Knicks, but ugh.

SACRAMENTO 100 MINNESOTA 98
TWolves blog says that Minnesota got cheated by the refs. This is the NBA. That is what refs do. But the T-Wolves didn’t have their emotional edge after their big victory over the Suns. Kevin Martin led Sacramento with 28 and hit the game winner with 16 seconds left. Ricky Davis led Minnesota with 24.

DALLAS 95 MEMPHIS 94
Mike Miller hit 7 of 10 threes on his way to 32 points. Josh Howard skipped another game, waiting for the birth of his first child. I thought the birth already occured? My bad. Dirk had to score 16 in the fourth to keep the Mavs from blowing the game. Nice try Memphis. A few weeks ago I was given the assignment to put together a roster of potential bloggers for some kind of magazine/website project. The guy I picked out for Memphis was at my house during last season’s Dallas-Memphis first round playoff series. The pain on his face after Dirk hit a big three was enough to make him the Grizzlie blogger. Unfortunately, he’s a long time magazine industry pro and he might not be able to do it. If there are other Memphis Grizzbloggers out there, I’d like to know.

LA CLIPPERS 110 CHICAGO 98
Is this Shaun Livingston’s proverbial breakout game? Clipperblog seems to think that could be possible, though we’ve been here before with Shaun. He made some big plays and scored 10 points in the fourth quarter to hold off the Bulls. 25 and 10 for Kirk Hinrich, but the Clips are a rising force in the West making their way into the playoff picture, as opposed to the team that is supposed to be getting better and become an NBA superpower…

PORTLAND 100 DENVER 91
Allen Iverson missed the game with an ankle injury. There’s your excuse. Z-Bo had 26 and 17, and Brandon Roy scored 25 with 8 assists, including a pass to an open Jarrett Jack for the dagger. Carmelo had 31 in the loss, which is now 4 in a row for Denver. I wanted to consult The Nugg Doctor, but his site was being weird, and you have to scroll down to rea the post “I think
I might be sick.” It was that kind of night for Denver. They had 13 assists and 19 turnovers.

DETROIT 113 NEW JERSEY 89
The Vince buzzer beater is the kind of shot that can inspire a team to turn their season around. But not the Nets, who are happy to just cruise through the year and make a push to win their division and claim that 3 seed when they have to. 24 for Rip, 18 for Chauncey. Chris Webber hit 6 of 7 shots for 17 points.

Okay. Moment of truth. I hate these 13 game nights with a passion. There are two great games tonight on TNT. Cleveland-Miami and Phoenix-San Antonio. I can hear stuff getting smashed in the other room and I need a shower. So I’m breezing through these next three.
HOUSTON 112 SEATTLE 102
T-Mac and Ray Allen had 36 each. 25 and 17 for Nick Collison.
PHILLY 89 NEW ORLEANS 78
Chris Paul is finally back. 9 points and 2 assists in 28 minutes. Iguodala led the Sixers with 22, 9, and 7. Philly won the battle on the boards 58-40.

ORLANDO 98 MILWAUKEE 73
The score was 56-29 at halftime. Darko had a double double with 4 blocks. The Bucks are terrible.