The D.A.Y. of Kurt Vonnegut and King Felix 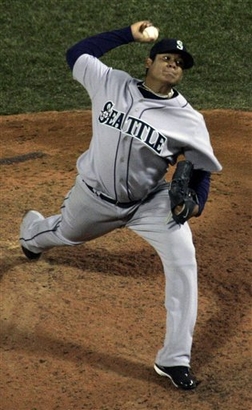 Starting off on the saddest possible note. Kurt Vonnegut passed away last night. He was one of the greatest writers that ever lived.

If I must put it into NBA terms, it’s kind of like Michael Jordan dying, but more personal and sadder. It’s raining hard and not supposed to stop today, which is fitting. RIP Mr. Vonnegut!

Last night I lived the life of an NBA superstar. I wasn’t feeling my best so I sat around and watched a sporting event. Just like Michael Redd, Gilbert Arenas, and many others. There I was, watching the Dice-K home debut and battle with Ichiro that was stolen by King Felix. It was on ESPN2, and the bottom line was scrolling all night. The words passed by “Kevin Garnett – out indefinitely. Paul Pierce – out for season.” And it kept going and going and going. Kind of depressing.

MIAMI 85 WASHINGTON 82
The Wizards slide down to the 7th seed continues. I am now openly cheering for them to lose and for the Nets to take over the 6th seed and set up the Vince vs. Toronto showdown. The Heat didn’t have Shaq or Haslem and they still won. They had a starting lineup including Antoine Walker, Eddie Jones, and Alonzo Mourning. What is this, NBA Live ’98? Antoine led all scorers with 19. Earlier in the day Khalid and I were talking about the Wizards chances, and he said he could see them not winning another game, including getting swept in the playoffs. I said that they could still get a win or two as one of those fluke things that happen in sports. He might be right though.

DETROIT 104 ORLANDO 99This game was on ESPN in high def, which meant the King Felix game was on the deuce, not in high def at my house. Booooooo. For those of you who were not watching the King Felix show, you missed out. 21 years old and absolutely toying with Manny Ramirez and David Ortiz. It was truly a jaw dropping silent awe performance. Even if you don’t like baseball, you would have appreciated this. As for the Magic and Pistons, this could be a preview of their first round series, which would be a re-match of two of the quietly more important Eastern conference shaping series in the recent past. Orlando had the Shaq-Penny juggernaut and Detroit was the hot young team on the rise with Grant Hill and Alan Houston. Orlando swept them, Houston played well and left for the money. The Pistons were still competitive for a few years because of the brilliance of Grant Hill, but they never got past the first round. Grant left for the money, going to Orlando of all places, and the Pistons had to start over. The next time they met in the playoffs, the Magic had T-Mac, who was arguably the best wing player in the league at the time, and was basically carrying that team like Kobe has had to carry today’s Lakers. Orlando took a 3-1 lead, Mac spoke to soon, the Magic couldn’t close out the series and that started a chain of events that destroyed the team, resulting in Tracy being traded while the wheels fell off to the extent that they won the Dwight Howard lottery. Detroit used that series as a springboard to learn how to win tough playoff series and became one of the best teams in the league.

Why am I going through this ancient history lesson? Most of you are being told things you already know. Well, the games being currently played do not really move me. Looking forward to the playoffs, I am. Detroit-Orlando round III. There could be some really intriguing match-ups this year. Oh, in this regular season game last night, Grant Hill got off to a hot start, but the Pistons closed out the game in the second half behind 28 and 8 from Chauncey Billups.

DENVER 115 UTAH 106
Not even Matt Harpring’s 31 point explosion could cool off the Nuggets. They have now won 7 in a row, while Utah has lost 5 in a row. Carmelo led the Nugs with 32, Iverson had 22 and 12, and Marcus Camby grabbed 13 boards. Denver is closing in on earning the right to play San Antonio.

DALLAS and PHOENIX
Both teams won. Rashard Lewis scored 30 against the Suns. Two of the best players to have on your fantasy team the past month are Rashard Lewis and Gerald Wallace. Pretty coincidental that they are both impending free agents, no? All you need to know about the Dallas-Minnesota game is that the leading scorers were Austin Croshere and Justin Reed.

HOUSTON and SAN ANTONIOTaking care of their businesses. T-Mac, Yao, and Rafer Alston combined for 82 points in a 99-95 win over the Blazers. San Antonio got 26 and 13 from Tim Duncan in their win over the Kings.

PHILLY at BOSTON or INDY at MILWAUKEE
Take your pick. Uh… the Pacers are actually still not mathematically eliminated. L’il Dun kept their season alive, scoring 25 in the win. The Philly-Boston game was summer league-ish. What evurrrrr.

Really, the big story of the night was LOST. SPOILER ALERT!!!!! When Juliette gave Sawyer and Sayid that little lecture about morality, I knew she was a snake. I hate her so much, and Jack could not possible be more of a softee. For a brilliant surgeon, he is pretty stupid. I get it Jack, you took an oath to save people, so you tend to trust too much. Listen to Sayid! He is the only one on the island that is always right.