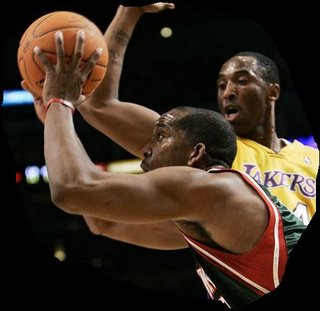 I’m going to do these with links to bloggers, keeping this nice and short. Mutoni had a busy League Pass night, I was at the Bobcats game, and when I got home I watched the latest episode of The Wire which was so gripping that I needed an hour to come down from it. On top of all that I can’t find my coffee mug this morning, which has me in full-blown crisis mode. Defcon 1. Fire the missles. Where is that thing?

MILWAUKEE 109 LA LAKERS 95
I have a feeling Michael Redd will be the frontrunner for Player of the D.A.Y. later on. MKE Bucks Diary enjoyed this game. A blog called My Kobe Bryant blog didn’t like it as much.

WASHINGTON 96 ATLANTA 95
Bullets fever loved the officiating. Impending Firestorm hated it. It looks like Bullets fever is subliminaly dissing the Hawks byu having the wrong score on their post, much like the Hawks had the funny scoreboard business against the Hawks the other night.

MEMPHIS 108 DENVER 96
I warned you Nugg Doctor. Cocky. Much different reaction on the Beale Street Beat.

SACRAMENTO 93 LA CLIPPERS 80
Sactown Royalty has one take. Clipper Blog has another.

CHARLOTTE 96 NEW JERSEY 92
Much more on this game later. The Nets had chances, but they could never get back all the way after the hole they dug a hole.

CHICAGO 102 NEW YORK 85
I listened to the end of this game in the car on the way home from Jersey. The Bulls found their cure, and it’s called playing the Knicks. Your New York Knicks. Blogabull has an open game thread.

HOUSTON 82 MINNESOTA 75
Couldn’t find much original content on this game, but Twolvesblog cut and pasted the newspaper story. That takes even less work than what I’m doing right now.

And I just turned my head to the left and there is my coffee mug, underneath my tape recorder, two inches from my hand. I feel stupid.