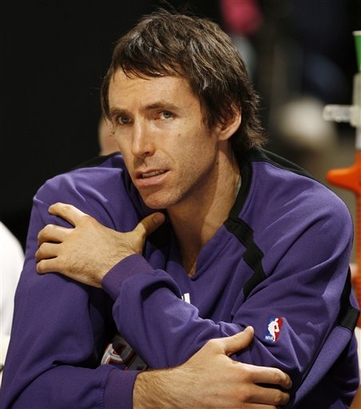 It’s official. Heroes is a better show than 24 right now. Lang is so busy with his new magazine responsibilities these days that the only fun he seems to be having is when he interrupts my various Heroes coversations around the office by calling us all nerds. If he only knew the instant messaging that goes on behind his back. I already publicly humiliated him last week when he was going on one of his mocking rants and I said something like “I forgot that Lang Whitaker is the guardian of all that is cool.” Everyone laughed at him. That was a fun moment for me. But I digress. Think of 24 this way… it’s like Vince Carter. Still very good and at times can flash brilliance, but it’s not the explosive life altering event it once was, and it falls into lazy habits too often. There were about 5 things in the newest episode that are just subtly tweaked, re-used plot lines from earlier seasons. Okay, very quickly… SPOILER ALERT DO NOT READ THE NEXT FEW SENTENCES IF YOU HAVE NOT WATCHED LAST NIGHT’S EPISODE, JUST SKIP TO THE BASKETBALL SUMMARIES: How is it that Jack can have an epiphany that he’s no longer able to torture people because of what the Chinese put him through and then within 2 or 3 hours he is able to torture his own brother whom he has not seen in years? Maybe it’s one of those “a leopard can’t change its spots” lessons. And by the way, his brother’s confession was laaaaaaame. Way to throw away the biggest mystery of season 5. END OF SPOILER ALERT. It was too cold to do anything but watch TV last night.

PHOENIX 113 DENVER 108
I gave God the Player of the D.A.Y. for when this game was originally scheduled to be played and he hooked us up with a blizzard so that Iverson and Carmelo could play together against the unstoppable Phoenix attack. Not only did Iverson miss the game with an injury (and Camby too), but Steve Nash got hurt and didn’t play in the second half. It’s almost like one of those ancient parables where an old man asks if he can live forever to be with his young maiden and has his wish granted, but forgets to ask for eternal youth and… whoa I’m babbling here. Anyways, God gave us the blizzard but He still has a sense of humor and took some of the stars out of the game. What do you want from me God? Human sacrifices? I’ll do it. The Suns claim that Nash delivered a fire and brimstone halftime speech to get them going. Something about how they were getting roughed up and needed to respond. Amare Stoudemire, who I once thought was the real reason Nash had such an incredible first year back in Phoenix, flashed his MVP form, taking over the game with 36 and 13 on 13 of 17 shooting. Carmelo had his first triple double with 31, 10, and 10. The Nuggets are 1.5 games ahead of the Golden State Warriors for the 8th seed. Denver-Dallas or Denver-Phoenix in the first round? Hot.

LA LAKERS 90 ATLANTA 83
Lang sent me a text message, pretty excited about the Josh Smith alley-oop. Why is Josh not in the dunk contest? Was the “tape on the floor” debacle really that bad? Kobe took the game over in the fourth, scoring 11 points and allowing himself to be the decoy other times. Atlanta’s players and coaches were impressed. Mike Woodson said “He’s a great player; he’s one of the best players who has played our game. When he makes a 27-footer, falling away in the corner, you’ve got to come back on the other end and execute your offense.” Or you just lose. Kobe had 27, Lamar Odom grabbed 18 boards, while Joe Johnson led the Hawks with 27 of his own and Josh Smith had his fantasy basketball stat stuffer of 20-8-7 with 2 steals and 3 blocks to go along with the reverse oop. Andrew Bynum tried a three with the game already decided and about 25 seconds left. Kids.

GOLDEN STATE 113 INDIANA 98
When two teams that wear similar colors trade half their rosters to each other, it gets confusing when they meet up. The Warriors won in a blowout, with a halftime score of 65-42. Stephen “Whooo” Jackson got his revenge against a team that may have dumped him for being a loose cannon (both mentally and with the aim of his pistol) with 36 points including 4 of 6 from three. Al Harrington had 16 and 10 and Monta Ellis somehow grabbed 10 boards. L’il Dun was 3 assist shy of a triple double against his former team, Troy Murphy had 3 points on 3 shots in 16 minutes. Darryl Darrell Armstrong blocked Jackson’s shot, so the Indiana fans had something to cheer. Jermaine O’Neal led the Pacers with 24 and 11 with 4 blocks in the loss. Jamaal Tinsley took 24 shots.

PHILLY 100 NEW JERSEY 98 OT
You’re not going to believe this, but the Nets lost a game in crunch time when the other team hit a big shot and they could not respond. At least it was just a free throw that beat them this time, not another buzzer beater. Still, this is really a depressing season for the Nets, and they are sooooooo lucky to be in the Atlantic Division. Andre Iguodala had a monster game with 23, 15 and 7, and Sam Dalembert grabbed 17 boards. Vince had 23 and 10 in the loss and missed what could have been the game winning three. I guess it was a make-up miss for the Utah miracle.

UTAH 100 CHICAGO 95
Memo Okur, coming off a Western Conference player of the week award, scored 12 straight points playing with 5 fouls down the stretch. Boozer is the All-Star, Deron Williams was arguably snubbed, but what’s Memo? Clutch. Deron had 18 and 13 while Kirk Hinrich led the Bulls with 26. This game featured a match-up of two of the highest paid defense first stars in the NBA, Ben Wallace and Andrei Kirilenko. Remember them?
SACRAMENTO 105 NEW ORLEANS 99
The Kings came out and scored 40 in the first quarter. Thanks for playing guys. Ron Artest led the way for Sactown with 21 and 9 with 5 steals. Chris Paul had 24 and 6 with 5 steals, but he’s really cramping Jannero Pargo’s style. Pargo only took 6 shots in 10 minutes. Scott Brooks, who was unstoppable from three in one of the NBA Live games for Genesis, coached for Eric Musselman, who had to miss the game with his DUI suspension ongoing.

HOUSTON 105 MINNESOTA 77
T-Mac on the key moment of the game, “I don’t dunk that much. My body can’t take it like that anymore. It was just one of those inspiring plays, man. Plays like that, you lead your team, you inspire your team.” And this game was a rout, a blowout, a romp, a massacre. The 50-30 halftime score does not do justice to how much of a smackdown this was. T-Mac led Houston with 32.

WASHINGTON 118 SEATTLE 108
Gilbert had an off-night shooting 4 of 14, but picked up 9 assists. Many of them contributing to Caron Butler’s 38 point outburst. The coaches really messed up the All-Star selections, but they got it right with Caron. So, let’s give credit where it’s due. The good news for Seattle is that Kevin Durant had another Kevin Durant game with 28 and 15. Since I have nothing to add about the Sonics, I’ll throw this in here. A few months ago I was in the Blazers lockerroom, and I asked LaMarcus Aldridge about Durant. He said point blank “He’s better than I was at his age” and we talked briefly about how he could raise his stock as high as the 2nd overall pick, much like LaMarcus was. It’s funny how he’s blown by Oden on so many people’s radar now. And I don’t mean that in a judgmental way, I just mean that if you have one of the top 2 picks, you’re good either way. The Sonics can get there.

MIAMI 113 CHARLOTTE 93
Dwyane Wade, 27 and 12. You expect that. Shaq. 22 and… 2? That’s bizarre. Either way, the Heat shot 62% and they’re sky rocketing to that magic .500 mark. They might be the best team in the East already. I have to find new words to describe how thoroughly the Eastern Conference sucks. Felton and Okafor played well enough for Charlotte but Jake Voskuhl started at center. Huh?