The D.A.Y. of Phoenix West over Phoenix East 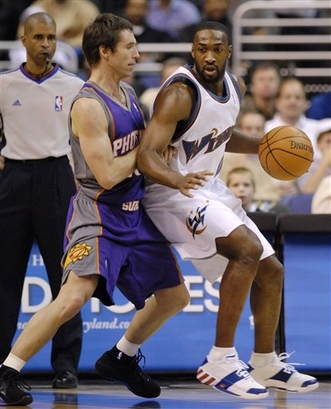 I was watching the State of the Union last night. Promises, proposals, soundbites…wait, is that Dikembe Mutombo? Is he seated next to the First Lady? Not only was Deke there, he was singled out for being one of those heroic citizens that goes above and beyond the call of his own career and dedicates himself to making the world a better place, in Dikembe’s case it was the construction of a hospital. Mutombo!!! I’m still woozy from that sight. Oh nevermind… that’s just a cold/flu thing I have. Drank some Nyquil last night. Head still spinning. Please forgive how short I’m keeping these write-ups today.
PHOENIX 125 WASHINGTON 105
I watched the whole first quarter of this game, when the Suns ran away with it and toyed with a Washington team that likes to think of itself as the Phoenix of the East. You think Gilbert jacks up shots with no consicence? The Suns are like 7 Gilberts, except they only take wide open shots. Amare picked up 2 quick fouls and it didn’t slow down Phoenix for even a heartbeat. Steve Nash stayed in attack mode, and they kept finding the open man, and when Washington did make its run later on in the game, Shawn Marion had a putback and a fastbreak dunk and the Wizards were done. The only way to slow Phoenix down is to make three point plays. Too many NBA players have a natural instinct to celebrate with a yell after they throw down a monster dunk. While they’re doing that (Brendan Haywood) the Suns already have the ball past halfcourt. Steve Nash hit 11 of 13 shots and had himself a 27 and 14 night. The Suns avenged an earlier loss, and have now won 14 in a row. Up next, the Knicks at the Garden.

DALLAS 111 ORLANDO 92
And the other unbeatable team kept their streak going as well. Dirk led the way with 33, 9, and 8. Dwight Howard had 15 and 14 for Orlando. Eight in a row for Dallas.

DENVER 117 SEATTLE 112
Once again, the Nuggets had a chance to work Carmelo back against a bad team that doesn’t play mich defense. This was a close game only because Ray Allen caught fire and scored 22 in the fourth quarter, finishing with 44 points, hitting 6 of 17 threes. 25 and 12 for Chris Wilcox, but it was Steve Blake hitting some big threes down the stretch to secure the W. If Melo is rusty from his time off, it’s hard to tell. 34 points and 9 boards and he got to the free throw line 11 times. Iverson had 21 and 10.

CHICAGO 94 ATLANTA 86
PJ Brown got the Bulls back on the right track heading into what they’d like to think is a big game against Dallas. 15 and 9 for PJ, as the Hawks have put together a Hawks-like three game losing streak. Hey, at least Joe Johnson and Marvin Williams scored in the 20s.
PHILLY 102 NEW ORLEANS 96
25 for Korver off the bench, 17 and 11 for Andre Miller. Philly will take its wins where they can get them, and the leading scorer for the Hornets was Devin Brown. 16 and 11 for David West, but the Sixers had enough offense to hold on at the end.
LA CLIPPERS 115 MILWAUKEE 96
Chris Kaman has been playing better, probably having something to do with his health. 11 and 11 with 6 blocks. Elton Brand led the Clips with 25. Charlie Bell led Milwaukee with 24.