The D.A.Y. of separating the Dwyane from the LeBron 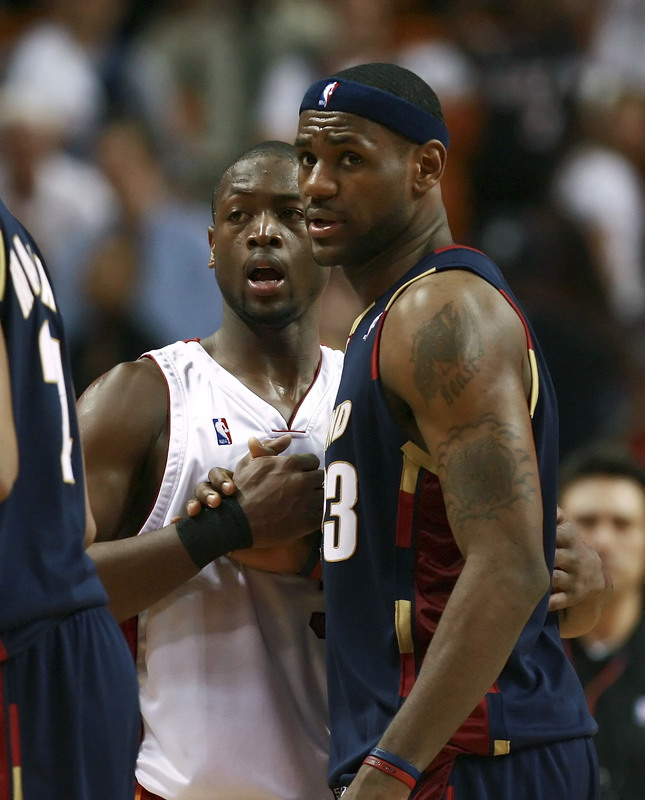 Yesterday we recorded a round table midseason podcast that hopefully I can figure out how to compress enough to get on the site. Ben posed the question of are we disappointed with LeBron’s “wait until the playoffs” attitude. I personally am, and I thought more about it watching him play against Dwyane Wade. LeBron is a great player but he doesn’t go as hard as he can every single time he’s on the court. It’s actually a smart move on LeBron’s part, and it’s yet another way he treats the NBA game like a 10 year veteran. It sucks for the fans and those of us who want to watch this once in a lifetime talent take the game to a new level, and my big point about his attitude on the podcast is that I understand LeBron’s reasoning for saving his energy, but I don’t think it’s cool that a player and a team that has never won anything other than one playoff series against a horrible defensive team, to be coasting like this. We all expect Bron to win 5 rings and MVPs and all that kind of stuff, but let’s see him go out and earn it. By comparison, look at Dwyane Wade. He already has a championship and Finals MVP, and his team has been to the second round or greater every year he’s been in the league, plus he carried Marquette to the Final 4 the year before that. Every time Dwyane Wade steps on a basketball court, he plays so hard he might die on the floor. You’ll never hear a fan complaining that he or she paid to see Wade play and felt cheated by his lack of effort. Now let’s get to the game.

MIAMI 92 CLEVELAND 89
Wade takes a lot of free throws in big games. Does he get extra help from the refs? Yeah, because he’s a superstar. But he also attacks the basket and puts himself at risk over and over again. He shot 23 of 24 from the line in this game. Clutch free throws down the stretch time and time again. Meanwhile at the other end, Miami knew to put LeBron on the line where he nearly shot airballs a few times. What are we to make of the play where LeBron clotheslined Dwyane at half court? Sure it was an accident, but since when does that stop Stu Jackson? Wade had a sloppy night with 12 turnovers but finished with 41 points thanks to all of those free throws. Shaq looked not unhealthy fouling out in 28 minutes with 16 and 8. His final foul was when he tried to take a charge from LeBron. I don’t ever remember Shaq taking a charge from anyone in his prime. Daniel Gibson continued to be a long overdue revealtion for Cleveland, hitting 4 of 6 threes on his way to 19 points. It’s good to see someone on the Cavs that wants to run back and forth and play with some excitement. Ron Rothstein nearly blew this game for the Heat by picking up a tech for disputing a call when LeBron ran over Udonis Haslem. Ronnie, when one player on your team takes 24 free throws, you are not allowed to complain about the guy on the other side getting star treatment. He gave them a free point in a tight game, and was bailed out by a key offensive rebound by James Posey off a missed free throw.

PHOENIX 103 SAN ANTONIO 87
The Spurs were dictating tempo and style for most of the first half, and Ginobili kept exploiting the soft middle of the Suns non-defense, on his way to a 32 point night. At a key point in the game, when the Spurs were ready to make a big run, Shawn Marion came up with about 5 great defensive and hustle plays in a row. It was a game of runs for both sides, with the Suns eventually pulling away in the fourth. Tim Duncan had another monster game, though he seemed a little bit tired down the stretch. His line ended up being 20 and 18 with 5 blocks. He’s still the best frontcourt player in the NBA. However… Amare Stoudemire’s long road back from recovery is a dangerous journey for the rest of the basketball world. The last time we saw him pre-surgery was the Western Conference Finals two years ago where he played like Shawn Kemp vs. the 72 win Bulls. Tim Duncan couldn’t do anything with that player, and the logical conclusion was that Amare would be the best player in the NBA the next season. Then came the surgery and a lost season, and this year he’s been learning to trust his knee more and more, and in this game against the same Tim Duncan, Amare had 24 points and 23 rebounds. And he’s still not all the way back to what he once was. Barbosa had 25 off the bench and Steve Nash had an off-night with only a 13 and 11, missing both of his threes.