The D.A.Y. of Stephon Marbury’s heartbreak 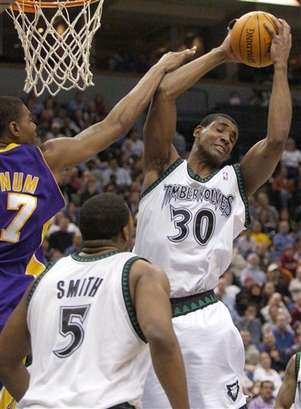 My dirty little secret is that I have been enjoying the Knicks as a fan lately. I don’t really talk publicly about being a Knicks fan that often, because it’s embarrasing. The game against the Sonics, with Stephon’s scorching hot shooting keeping them in it after falling into a disgraceful 18 point hole, only to lose it when Steph gagged on a free throw… that was a bitter pill to swallow. A tough loss. Much worse than just one of 82. That was a soul burner. Also, Captain America has been assassinated. A sad night all around. Interesting to note that Captain America was on steroids, and that was his super power. Seriously. Sportswriters who criticize roid users, you are the enemy of our country’s greatest hero, who was invented to fight Hitler. I’m out of the office to tend to a personal matter today, so it’s up to Lang to decide on Player of the D.A.Y.

MINNESOTA 117 LA LAKERS 107 2OT
Kobe Bryant scored 40 with 13 boards and 8 assists, which we’ve seen happen before. KG had 26 and 17, Ricky Davis 33 and 10, and Smush stepped up with 24. These are all great performances, but nothing we haven’t seen before. Mark Blount hit three three pointers in the last 2:20 of regulation. Now that is kind of crazy. Who would have ever thought there would be a game where Kobe slows down at crunch time while Mark Blount takes over? The T-Wolves love going to OT. The Lakers need more bodies.

SEATTLE 100 NEW YORK 99
It wasn’t just Marbury’s free throw. He was the one guy that was hitting free throws while everyone else was missing. Ray Allen kept making plays, Rashard Lewis hit a huge shot… you know, I’m not emotionally ready to talk about this game. The wound is still open.

WASHINGTON 129 TORONTO 109
Having Jamison and Butler back is very big for the Wizards. Toronto is the young rising force in the East, and they felt the smacketh down. Bosh had 25 points and 1 rebound (?) in the loss as Gilbert found his three point stroke going 5 for 5 and only needing 26 minutes of playing time to wrap this up with 25 points on 13 shots.

THE UNBEATABLES 2 LOSERS 0
The Nets hung in there against the Mavs into the third quarter, but the foregone conclusion you expect is that the Mavs win. They always do. Jason Terry jumped over a nice eldery lady sitting courtside, possibly saving her life by avoiding the collision. That’s the Dallas Mavs for you, they dominate basketball games and serve humanity at the same time. 16 wins in a row. The Spurs scored 34 in the fourth quarter to get past Portland, pushing San Antonio’s winning streak to 10. Ginobili scored 23 in 26 minutes.

SACRAMENTO 102 INDIANA 98
What a waste of a big night from L’il Dun. The match-up of the last two teams to deal with Hurricaine Ron Ron’s magic touch came down to a Kevin Martin three point play that prevented the Kings from blowing a 20 point lead. Dunleavy Jr. scored 24 and the other half of the ivory towers Troy Murphy put in 19. Jermaine O’Neal had 22 and 12. But the backcourt of Martin and Bibby led the Kings to the win without Ron.

DENVER 106 NEW ORLEANS 91
Another monster game on the glass by Tyson Chandler, 14 more assists for Chris Paul, but the Nuggets were able to take a long enough break from internal bickering to get the win. Melo and Iverson combined for 46 in a pretty easy win. The off-court issues are heating up though. George Karl is doing that thing where he questions his star players’ commitment. Carmelo is leaving the team to be with La La for the birth of their child. Iverson is just there. Even though the Nuggets are a huge disappointment, they will be right there in the playoffs with the firepower needed to upset one of the three giants. The Lakers are in a free fall, and Denver’s immediate comp are the Clippers, Kings, Hornets, and T-Wolves. All the Nuggets have to do is get into the playoffs. They won’t win a series or anything like that, but maybe Allen and Carmelo can entertain us for a few games. P.S. George Karl has worn out his welcome in Denver. That’s what George Karl does. The similarities between this Nuggets team and the Milwaukee Bucks with Ray Allen, Big Dog, Sam Cassell, and Tim Thomas, are striking.