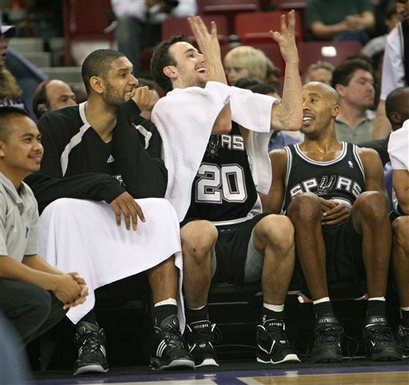 Monday of a short week. Thanksgiving so close. Over the weekend, Gilbert went off for 40+ again, the Nets were embarrased by Portland, Dwight Howard had yet another 20-20, Utah beat the Suns in a run-n-fun game out west running their record up to an impressive 9-1, and there were many many more big performances. After an action packed Saturday, there were only two games yesterday. And here they are.

SAN ANTONIO 108 SACRAMENTO 99
The Kings were overmatched at Arco. That is rare. In the first half Sacramento played well enough to win, with Ron Ron making all kinds of shots. But somehwere in the second quarter the Spurs grabbed momentum from them, took a lead at the end of the half, and controlled the entire second half. The final score is much closer than the game was. With Brad Miller still out, the Kings had nobody to slow down Tim Duncan, who ended up with 35 and 14 on just 17 shots. Ginobili made some of the key momentum stealing plays, including getting away with an over the back foul late in the first half that turned into points the Spurs didn’t deserve. Mike Bibby and Tony Parker each struggled with their shot and Kevin Martin hurt his scoring average with a lowly 20 point game. The exciting news from the game was that three players had to leave to get stitched up. Brent Barry and the Kings Ronnie Price collided, sending them both to the sewing needle, and Kenny Thomas caught a Duncan elbow to get in on the stitching party. As Barry put it “I came to Arco Arena and a hockey game broke out.”

LA LAKERS 82 CHICAGO 72
Andres Nocioni could not miss, carrying the Bulls on his back with 30 points, including 6 of 9 threes. Too bad there was nobody else to help him out, other than one Ben Gordon three that made it close. But the Lakers hit some free throws, and that was the ballgame. Kobe didn’t have to do too much, and scored just 18, allowing Andrew Bynum to take the Sunday night spotlight with 12, 13, and 4 blocks. Lamar Odom took more shots than Kobe, leading the Lakers with 23 points as the Lakers won because the Bulls are a jump shooting team and on this night they were frozen cold. Outside of Nocioni’s 11 of 22, the Bulls were 16 of 58. That is 28%, which is horrible. Baseball mega-agent Scott Boras had courtside seats, and he brought his latest trophy, Daisuke Matsuzaka, to the game with him.