The D.A.Y. of Tyronn Lue on Super Bowl Sunday 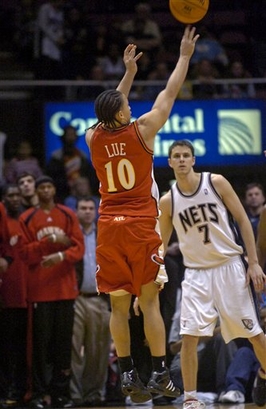 I started writing this a half hour before my friends come over to watch the Super Bowl and I end up getting too drunk and full of pizzas, chips, various frozen high sodium snacks from my freezer, and even a vegetable or two. Great weekend. I spent literally 12 straight hours on Saturday cleaning and it kept going on Sunday. When I wasn’t cleaning I was shopping for party supplies. My only break was the game itself.
ATLANTA 101 NEW JERSEY 99 OT
I was on one of my shopping missions for the big game when the fourth quarter was coming to a close. The Hawks were allowing Josh Smith to take their big shots, which were threes. Joe Johnson only had 34 at this point in the game and that allowed the Nets to come back and force OT. Joe finished with 37 and 8, but he’s not an All-Star. Meanwhile Nets All-Star Vince Carter had 27, 8, and 7 and hit another huge three just like he did in Utah, but this one still left 2.9 seconds for Lue. Tyronn Lue crossed up Antoine Wright and nailed the game winner from 23 feet. The Hawks celebrated like they won the Super Bowl. Since Tyronn has returned from his latest injury, Atlanta has won 5 of 7. The 8 game losing streak earlier this year just so happened to start with the first game he missed with injury. This is what you would call a trend.

TORONTO 122 LA CLIPPERS 110
Sam Mitchell won coach of the month in the Eastern Conference in January and now his young team is getting better and putting distance between themsleves and the rest of the Atlantic. I thought our army of Toronto readers were calling for his head all season. No? Chris Bosh led the balanced attack with 27 and 7 and Jose Calderon continued his great PG play of late with 12 assists. Elton Brand had 21 and 10 in the loss and Cat Mobley scored 24, hitting 5 of 8 threes. The Raptors offense was clicking to such a degree that nothing the Clippers did would matter. Toronto scored 66 points and shot 70% in the first half. Atlantic Division, somebody is ready to claim you.
DETROIT 90 CLEVELAND 78
The Chris Webber experiment has been working out nicely for the Pistons so far. Sure, the defense of Ben Wallace was their identity in the past, but they don’t even need that kind of presence against the Cavs, a team with no identity of their own. Chauncey led the Pistons with 18 and 10. LeBron, well I’m getting tired of taking about LeBron the half-speed basketball player. Here’s the big LeBron moment of the day: He painted the hummer that his mother bought him and loaded it with all of the newest toys. He claims that he does not have an endorsment deal with Hummer, but in his own words “I sold a lot of trucks for them. They should give me one for free.” The rich get richer. If the first round match-up is Cleveland-Toronto, how great would it be if Toronto won?