The D.A.Y. Peja went back in time 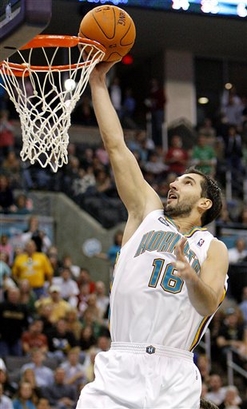 Playing beat the clock to get this up before check out time from the hotel from the secret location. Under PRESSURE.

NEW ORLEANS 94 CHARLOTTE 85
Peja had his best game in a long long long time, scoring a career high 42 and played aggressively while doing it. He had a deflection for a steal and fast break, he was 5 of 10 on threes, and he looked like the guy that was in the MVP discussion in what seems like another lifetime ago. It didn’t even matter that Chris Paul went 0 for 8. Emeka Okafor put up a 25 and 16 in a loss. Charlotte is 1-6.

MILWAUKEE 103 ATLANTA 101
The Hawks came out with no energy, fell way behind, got back into the game with help from Charlie V hitting the deck and not returning, and took a 10 point lead with Tyronn Lue making pull up threes and the defense flying around getting their hands on everything. Josh Childress had a SLAMADAMONTH nominee with his dunk over Brian Skinner. Wasn’t expecting that one. By the middle of the fourth, the Hawks flasehd back to the old days of being unable to close out games, Michael Redd made some big 3 point plays going to the basket, silencing the loudest crowd possibly ever at the Philips Arena, and Joe Johnson didn’t have the final answer. The first place Hawks are no more, as Orlando has passed them. Redd scored 30. Joe Johnson and Lue had 29 each.
DENVER 112 MIAMI 105
The Nuggets jumped out to a big lead, and Wade who didn’t have Shaq with him, made it a game by going to his signature move. He shot 16 of 17 from the free throw line. The final result of the Melo-Wade shootout was 33 and a W for Melo, 37-11-8 for Wade. The Nuggets pushed the tempo, and Andre Miller ate Gary Payton alive for 29, 10, and 8 with 3 steals while Gary had 3 points, 2 assists, and 4 fouls plus a tech. Riley only played 7 guys plus one minute for Jason Kapono.

SAN ANTONIO 92 HOUSTON 84
T-Mac was unstoppable in the first half, going off for 20. Yao was doing his thing. The Rockets built up a 19 point lead, and Pop pulled the starters. Beno Udrih, Robert Horry, and Francisco Elson led a 20-1 explosion, Manu came back in to hit a big three, and the Spurs went on to win. Not fair.

UTAH 112 LA CLIPPERS 90
The Jazz, who have the best record in the NBA at 7-1, got 27 from Memo Okur and 22 from Matt Harpring, turned up the D in the second half and handled the Clips fairly easily. Chris Kaman did not have his best night, with 3 points and 3 boards before fouling out in 18 minutes.

GOLDEN STATE 110 TORONTO 99
Chris Bosh put up a 20-20 in a loss, 10 of those boards coming on the offensive glass. The Raptors nearly ran away with the game, putting up 41 points in the second quarter, but the Warriors used an 18-3 run in the fourth to take it back. Baron Davis continues to make all the big plays for his team. 22 points, 12 assists, leadership. L”il Dun had 22 and 8 off the bench.

DALLAS 111 CHICAGO 99
A highly paid center that’s been to the NBA Finals was a force of intimidation. That’s right, I’m talking about Erick Dampier! He had 5 dunks and 3 blocks, at least 2 of them were as they say, EMPHATIC. Dirk took on the scoring load, going for 31 and the Mavs picked up their first home win of the season while Scott Skiles began his tinkering with the starting lineup, which is what he does. Luol Deng and Hinirch combined for 49 in a game the Bulls led briefly before the half, but a scoring drought ended their chances. This was a game 1 of a 7 game road trip for Chicago.

MINNESOTA 101 PORTLAND 89
The T-Wolves held Portland to 11 in the first quarter and even with Zach continuing his dominating start to the season with 26 and 9, and the inevitable run, the Blazers were just in too deep of a hole. Ricky Davis broke out of a shooting slump with 27 points on 11 of 18 shooting.