The D.A.Y. saved by Foye 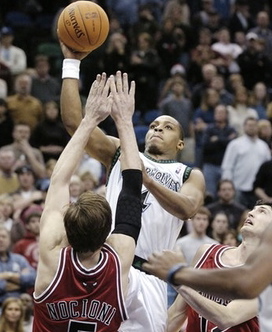 A full slate of games for the D.A.Y. I dedicate this to President Ford and James Brown and whoever dies later today.

MINNESOTA 100 CHICAGO 98
The T-Wolves blew a 25 point lead, so Randy Foye could hit a game-winner with 1.8 left. Good strategy. A career-high 25 for the rookie, as the Bulls played two very different halves. KG did led Minny with 26, 14, and 8, and let his young teammate play the role of hero. Ben Gordon led the Bulls with 27.

DETROIT 92 NEW JERSEY 91
Some guys whine and complain so much that you learn to just tune it out. Jason Kidd is not one of those guys, and he might be the most politically correct, diplomatic, uncontroversial player in the game – at least since he got in trouble for beating up his wife. After this game he said “We fought, but that doesn’t mean anything when you have the officials take over the game like that. You go with the Three Blind Mice, and it’s just sad that Tom (Washington) screwed up that game for us.” The play he speaks of was Vince initiating contact on Rasheed and not getting a call that should have sent him to the line for free throws. That Rasheed Wallace, a a ref’s darling. The Nets sure have a lot of excuses when they lose. Refs, injuries, blah, blah, blah. They are in third place in the Atlantic. Vince scored 28, Kidd had a near triple double, and rookie Josh Boone grabbed 12 boards in his most playing time yet, nearly 30 minutes. The Pistons got 21 each from Sheed and Rip Hamilton.

MILWAUKEE 114 SAN ANTONIO 107
The Bucks went into San Antonio, and came out with their fifth straight win. Michael Redd did his thing with 36 points on 14 of 22 shooting, Bogut grabbed 11 boards, but the Milwaukee winning streak is all about Mo Williams. In their last loss, he scored 18 with 6 turnovers. Since then, he’s had games of 28, 19 with a triple double, 26, 32, and 23 in this game against the Spurs. Duncan had 25 and 12 and Tony Parker had 24 and 10 in the loss. With the Spurs giving up their spot at the top of the Southwest, Pop was cheery as always, “Our players need to make up their minds … that (defense) is what wins games for us, or if they want to make summer plans.” Brent Barry and Manu didn’t play cause of the flu.

DALLAS 97 CHARLOTTE 84
Josh Howard is the Mavs second best player. He’s better than anyone on the Bobcats. 27 and 8 for Josh, who is making an All-Star push in a conference loaded with All-Star forwards. The Mavs won their seventh in a row and now have the best record in the NBA. Matt Carroll started for Charlotte and scored 14 points in 23 minutes. Adam Morrison led the team with 17 off the bench.

DENVER 116 BOSTON 105
Remember when AI was the only star on a team that he had to will to victory? In this game the other four starters for his new team were Yakhouba Diawara, Nene, Najera, and DeMarr Johnson. Nene had 12 and 14, Najera grabbed 11 boards, and Reggie Evans pulled down 14 more boards off the bench, but seriously, are established NBA stars allergic to playing with Allen Iverson? He had 28 and 13 assists on 22 shots. Earl Boykins added 28 of his own, taking 19 shots. Al Jefferson continued his young and beastly ways with 16 and 15, his fifth straight double-double. Gerald Green followed up a 20 point game with 18 in this one. Young Celtics, putting it together. Watch out.

SEATTLE 102 NEW ORLEANS 94
First of all, Chris Paul hurt his ankle and he’s supposedly going to miss 2-4 games. That is unfortunate. He only played 10 minutes, and managed 7 assists in that time. The Sonics took advantage of the fact that Jannero Pargo would try 21 shots and lead New Orleans with 23. Luke Ridnour, Ray Allen, and Chris Wilcox combined for 69 points. Did I mention that Chris Paul hurt his ankle?

PHOENIX 110 PORTLAND 87
Leandro Barbosa hit 8 straight shots and scored 20 points in a six minute stretch between the third and fourth quarters. If he were to keep that pace up for a whole game, he would score 160. After the game, his quote: “It was hard for me in the beginning, because we had ice under the court. Then I was just running up and down. I saw some space for me to get to the basket and I did.” I assume they played a hockey game there earlier in the day. The Blazers were led by Jarrett Jack’s 18 and Z-Bo’s 18 and 14. Portland had 8 assists as a team. Boris Diaw had 8 assists, with 0 rebounds and 0 points. Weird.

UTAH 102 LA CLIPPERS 92
The Jazz weren’t playing their best ball, but got some big shots late from Memo Okur and pulled away for an easy enough win from this disappointing Clippers team. Boozer had 26 and 10, Okur scored 24, and Deron Williams added 21. Let’s talk Clipper for a sec. Sam Cassell is not healthy, and they miss his on court leadership. They are struggling. Corey Maggette is playing well enough that they could actually trade him for Ron Ron. This needs to happen. Cassell, Kaman, Tim Thomas, and Ron Artest on the same team along with quiet and classy Elton Brand and the flamboyant Cat Mobley. Coached by Dunleavy Sr. What a locker room! Elgin, pick up the phone.

WASHINGTON 116 MEMPHIS 101
The Wizards didn’t wear their duracell battery unifroms, so Gilbert settled for a sudued 31 points on 13 shots. In three quarters of a blow out win. It was 45-18 after the first. The Grizzlies were led by 23 and 10 from… Alexander Johnson of course.

GOLDEN STATE 116 PHILLY 97
The latest injured Warrior is Monta Ellis, who did not play. Baron led the way for Golden State with 21 and 16, and Matt Barnes continued his reign of efficiency with 25 points on 8 of 9 shooting. 7 of 8 threes. Lights out. Rodney Carney matched those 25 for Phily, but it took him 22 shots in 45 minutes.

INDIANA 81 HOUSTON 76
T-Mac made his return and led the Rockets with 19 points. Good thing, cause other names in their starting lineup were Mutombo and Juwan Howard. Old school. Ugly score for an ugly defensive game. 76 points with T-Mac. Al Harrington led the Pacers with 23 and 14 on 24 shots. I’m going out to Jersey to watch these Rockets play the Nets tonight. I’ve already seen the Nets lose to Charlotte at home. Can they lose to the Rockets without Yao and with a rusty T-Mac. I think they can.