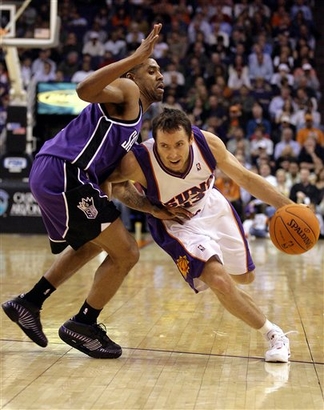 As everyone who’s anyone knows by now, I was on T.V. last night. NBA TV. But don’t worry, I still walk amongst you lowly mortals and I’m still The People’s Champ, even if most of those people will never be on TV. I still have my staff put my pants on me one leg at a time. I still ask my chauffeur Jonesy how the wife and kids are, even if he’s not a big-time TV star like me, and his wife and kid would be so impressed by my TV time that they would leave him for me. I still make small talk with the little people who act like they haven’t seen me on TV, trying not to seem like a groupie, but know deep down they’re impressed. My appearance took place out in Jersey, right before the Nets game, in a small janitor’s closet, just me and a camera and a pair of headphones. Right before I stepped into the room I saw Marv Albert walking around. I said to him “Hey Marv, I’m about to be on TV. Jealous?” He acted like he didn’t hear what I said, as if he wasn’t blown away by the fact that I was going to be on. Hater.

Actually, I didn’t say anything to Marv. And these NBA TV appearances are nothing new to SLAM staff. New to me though. The most important part of my time on the air was when I was allowed to hold up a copy of the new SLAM with Vince on the cover. The studio hosts were coming live from the NBA Store where the blogpocalypse was taking place, and it’s possible that everyone at the NBA store was subjected to my performance. Good. Now go out and buy the new issue. After it was over, I headed out to the court and there were thousands of people standing up with their hats in hand, paying homage to me, some of them saluting in awed silence, waiting for me to get to my seat before they sat down. They even had a guy singing the National Anthem while I walked in.

PHOENIX 127 SACRAMENTO 102
Steve Nash had 20 assists. Amare had 17 and 13. Marion scored 23. The Suns hit 14 of 31 threes. That is as good as Phoenix Suns basketball gets. D’Antoni and Nash even picked up techs to ratchet up the intensity. The Kings were a step behind all night. Mike Bibby had good numbers, with 21 and 7. But that means he had 13 fewer assists than Nash.

PORTLAND 88 DETROIT 85
The Pistons are supposed to have one of the great home court advantages in the game. Their players walk around with a swagger earned from a championship and some deep playoff runs. Zach Randolph showed up at The Palace and gave the business to that very same Pistons team. 31 and 13 for him and the go-ahead bucket with 21 seconds left. Jarrett Jack played just as well as Chauncey, and Lamarcus Aldridge held his own against the Pistons front line. Rip led the Pistons with 25.

HOUSTON 118 GOLDEN STATE 90
Yao dominated from the get-go, and the Rockets had this game in hand by halftime, so T-Mac treated the third quarter like it was practice. After the game he said “This was a great opportunity to go out and try that because we had a comfortable lead. I’m just trying to take it to another level now.” He scored 13 of his 31 in the third. No lingering effects from the concussion. The Warriors have now lost 4 in a row, and it appears that Troy Murphy is in Nellie’s dog house. He was benched in favor of Anthony Roberson. The first three Warriors off the bench are Murph, L’il Dun, and Adonal Foyle. That’s an expensive bench. Monta Ellis led Golden State with 19 and Nellie still has to wait to join the 1,200 win club.

LA CLIPPERS 101 MIAMI 97
Elton Brand exploded for 33 points and 17 boards, demanding the ball and carrying the Clippers above .500. Dwyane Wade had 33 points, but he couldn’t get the big basket or draw the key foul for some free throws with the game on the line. Miami fought their way back after falling behind by 14 in the third quarter, but he couldn’t finish the comeback. Cat Mobley scored 21 and starting PG Shaun Livingston outplayed the Eboy–Glove pairing. Haslem and Mourning did their job grabbing boards, but there was not much else going on for Miami.

DALLAS 92 NEW JERSEY 75
We were there. Lang has the write-up.

SEATTLE 102 ATLANTA 87
I’ve spent the early part of this season writing about how soft the Sonics are inside. They beat Atlanta 44-28 on the boards. 17 offensive rebounds. Ray Allen didn’t play cause of some foot pain (MRI to come. If the Sonics are smart, they’ll oversell his injury and get into the Oden sweepstakes) and the Sonics still shot a BLISTERING 55% from the field. Not the Hawks finest defensive moment. Joe Johnson got his numbers with 34 points on 29 shots. Seattle spread the ball around, with Rashard Lewis’s 29 on 10 of 16 leading the way.