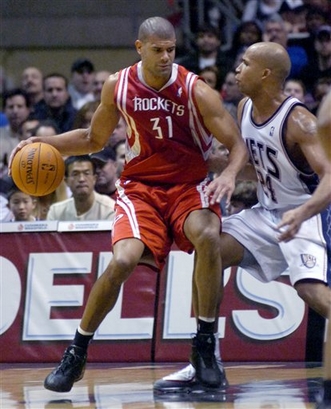 Okay, so I’m extremely late to post this. It’s 3 P.M., right about the time that you used to get your one shot deal Links. So, last night’s games…

Russ covered all you need to know about the Knicks-Pistons. I was in Jersey to watch the Yao-less and 50% of T-Mac Rockets easily handle the Nets. The Raptors are in first place after their 3 point win over Minnesota. Boston was blown out by the Clippers. Dare I say… the Knicks are the best team in their division, and they could take the 3 seed?

I enjoy Nate Robinson as much as anyone, but the Knicks post-brawl resurgence also coincides with his suspension. Very interesting.

As for the Nets, oh boy. Their defense is a joke. The Rockets would screen, drive and kick, swing it around and Battier would just drain open threes. Shane hit 7 of them, an Olympic effort. The Rockets had 13 turnovers at the half and it was still a blowout. T-Mac was moving around like an old man afraid to fall down the steps when they’re covered in ice. It was still a blowout. Vince started out cold, and he basically did what Kobe did against the Suns in game 7. Completely stopped trying. Or so it seemed. Jason Kidd had 6 steals off Rocket sloppiness in the first half, and the Nets had trouble finishing fast breaks. Richard Jefferson opened the game with a bang on Tracy, and then disappeared for the rest of the night. Josh Boone came in and got used by Juwan Howard. Marcus Williams, Hassan Adams, and Nachbar gave Jersey its best chance to win. The Nets are a friggin’ mess. It hurts to say that, because Lawrence Frank is my favorite coach other than Jeff Van Gundy. After the game and Houston’s 25 point win, the media descended on Jeff and he was his typically sour-faced self. I miss that guy.

Other action included the Lakers beating Orlando behind 27 from Kobe, Gilbert with a remorseless yet tasteful 39 points in a Wizards win over Charlotte, while Gerald Wallace had 40 and 14 in the loss. Cleveland beat a banged up Hawks team down in Atlanta. Milwaukee beat Memphis, Sactown beat Philly, and Portland beat a Chris Paul-free New Orleans.

Big win of the night went to the Bulls over Miami. Is Miami going to turn it around and get back into competition? A career high 40 for Ben Gordon as the Bulls beat them. Big night for UCONN. Except for Boone. Did I mention that Juwan Howard did him ugly?
Alright, that’s the extra quick D.A.Y.

Gotta get back to work on something else for the site.