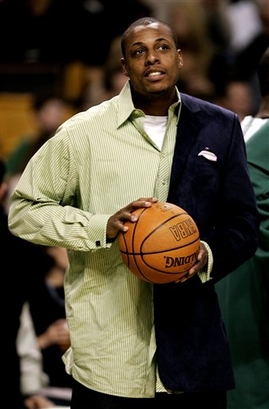 The Celtics are worse than you think they are. Sure, they’ve got a 15 game losing streak, which is pretty horrific, but I just looked at their season results. The last team they beat was Memphis, and before that it was Portland. If you go back to the last time they resembled an NBA team, which was during a 5 game winning streak (I’m serious, they had one) from December 9th to 16th, the teams they beat were Jersey, NY, Denver, Philly, and Charlotte. None of those teams are all that great either. Since that win over Charlotte, Pierce played in one game which they lost to Golden State, and including that game the Celtics are 2-22. I thought that Memphis or Seattle would win the lottery this year, because the East is so bad that the bad teams will all cancel each other out and have inflated win totals when they beat each other. I was wrong. The Celtics are going to win the lottery by a mile as the other bad teams in the East fatten up their record by beating them over and over. The Grizzlies are still tied with Boston with 12 wins because of their 6-23 record against other teams in the West, but the Grizz at least have a fighting chance to win some games, and though I have little to no idea who Tony Barone is or what he looks like, I think he might be a better coach than Doc Rivers.

And what is the deal with Paul Pierce’s look here? I guess that’s his jacket hanging off one side of his body. He looks like Two Face a.k.a. Harvey Dent.

DETROIT 109 BOSTON 102
A passing clinic. The Celtics had to outscore the Pistons by 15 in the fourth to make this appear to be not another excercise in embarrasment. Rip had 11 assists, McDyess did whatever he wanted, Webber went for 17, 6, and 6 with 4 steals. The NBA feels different when the Celtics suck, and right now they certainly do. Perk blocked a McDyess shot to break up his 8 for 8 night, so there’s something. Not much, but something. Rondo had 11 assists.

NEW YORK 102 LA CLIPPERS 90
I was listening to this game on the radio because of my full-time second job, which is constantly cleaning my apartment. Have I mentioned that I now live with my girlfriend? Anyways, Gus Johnson does the play by play for the Knicks, and he is a maniac! His enthusiasm is fun! The Knicks came from behind, scoring the first 10 points of the third quarter as part of a 24-4 run, and put the game away in the fourth. Gus went crazy when the fans started doing the wave and he warned that the second half of the season is going to be one big Garden party. Former Knick and full-time fugazi Tim Thomas put a SLAMadamonth nominee on David Lee and Channing Frye that left David with a black eye. It’s a good thing the Knicks won the game, cause that hurt. There is truly no player in the NBA that could have dunked on the great David (and Channing) that would have made it more offensive. Forced analogy: it’s like you sold an old beat up car that you overpaid for and now you have some new efficient car that isn’t the fastest or sleekest but it gets great miles per gallon and outperforms what the dealership said it would. Then your old car that you sold comes barreling down the street and smashes into your new car at 100 M.P.H., a speed that you never could get it to go up to. Okay, I even lost myself on that one. David Lee did have 16 and 10 off the bench, Brand and Fugazi had 22 each for the Clips, while Curry and Crawford had 23 each for the Knicks. Any ex-Bulls playing in this game?

PHOENIX 109 PORTLAND 102 OT
Nice try Portland. With Nash missing the game with a bruised shoulder, the Blazers were able to make this a game, and could have won it on a last second lay-up by Travis Outlaw. But just the fact that OUtlaw is taking the last shot for the Blazers should tell you something. Z-Bo started out hot, hitting his first 8 shots and finishing with 33 and 10, while Amare outdid him with 36 and 9. A post-microfracture dream showdown. My favorite stat from the game is that these two dominant post players combined for 2 assists and 12 turnovers. Leandro Barbosa stepped in for Nash and delivered one of his halves of spurtability with 23 points after halftime as part of a 25-7-6 night. Brandon Roy scored 27. Amare and Barbosa combined to score the Suns last 28 points.

HOUSTON 98 MEMPHIS 90
Pau Gasol is really getting his trade value up. 30 and 13 with 5 blocks in the loss, but if he keeps doing that then the Grizz are going to be winning some games, which they do not need to do. Still, it was a perfect night for the Grizz, other than Boston losing again. Memphis gained a lottery ball and Pau gained value as a trade commodity. They need to move him ASAP so they don’t accidentally start winning, and they need to do it with his value at its highest. He is going to be a bigger acquisition during the NBA season than Allen Iverson or Chris Webber. Take that, you cocky Americans. T-Mac had another big night with 33, 8, and 6.

MILWAUKEE 116 ORLANDO 111
Dwight Howard was a perfect 9 of 9 from the field on his way to 21 and 11 and he totally dominated Andrew Bogut, and I mean totally. But, Ruben Patterson had 27, 7, and 6 leading 4 Bucks who scored 20 or more. Accoring to Ruben, he had the following conversation with Michael Redd, “I told Mike, ‘I’m winning this game for us. I’m tired of losing. He said, ‘Go out and do your thing.”‘ Be careful what you wish for, Mr. Redd.