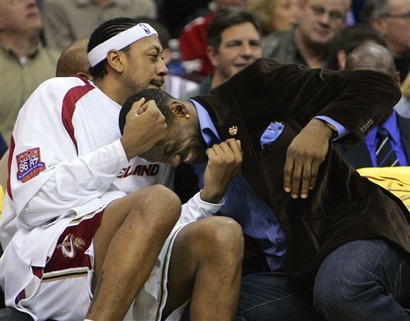 I was watching Sportscenter the other night, and my favorite basketball talking head of all-time was on. Bill Walton. A lot of people don’t trust his opinions or respect him because of the extreme hyperbole, but you have to understand that he is playing a character. If a guy makes a nice pass, he is a reaffirmation of the glory of the selfless commitment to the love movement. If he misses a three, he has disgraced his family. It’s a bunch of BS, but I find it funny. Anyways, Bill was on the other night talking about what teams he finds the most disappointing. #1 for him was the Cleveland Cavs, and his reasoning was that they are a joyless bunch, walking the ball up the floor and not embracing the new NBA style of wide open play. He really tore into Mike Brown’s decision to go with Eric Snow, who should not be a starting point guard in this league. Kid Cleveland has a humorous and timely idea for what needs to be done to Eric. Rookie PG Daniel Gibson out of Texas got the start. Let’s take it from there.

CLEVELAND 124 GOLDEN STATE 97
The Warriors could not hit a shot, and went 2 for 20 from three. The Cavs were without LeBron and had their best balanced attack in a long time. Daniel Gibson hit four threes, Sasha Pavlovic scored 24, and the Cavs ran away with this game in the first quarter. Hopefully the Cavs will continue to run now that they have a point guard with legs. Nice jacket. What the hell is going on in that photo?

NEW YORK 99 LA LAKERS 94
Kobe Bryant could have checked in to the lodge and spa at Cordilerra last night, but he could not set foot inside Madison Square Garden, because that would be illegal. Several of my co-workers attended this game, and they should have game notes. I tried to get Khalid to admit that all he cares about is being around celebs like Kobe to make himself feel important and that he does not care about basketball, but he wouldn’t indict himself. Eddy Curry had 27 and Jared Jeffries might have saved his starting job with some nice hustle plays, although Maurice Evans did hit him with the follow through on a jumper at the end of the game. SUSPEND THAT MAN!!!

WASHINGTON 104 DETROIT 99
There should be game notes from this one too, these written by Johnny Mann. And it’s possible he has an exclusive interview with one of the key entertainers of the evening. It’s not a player. I shouldn’t say any more cause it is his story to tell. Antawn Jamison left with a knee injury after 5 minutes, but Eddie Jordan wasn’t too worried, as his post game quote was “we kicked their butts.” Not only was this a big game for Leastern Conference supremacy, but this helped Eddie out in his quest to coach the All-Star team, though Scott Skiles still has a chance. I really hope Eddie can hold him off. Gilbert led the Wizards with 36, 11, and 7. More from Johnny Mann later.

INDIANA 103 BOSTON 96
Sigh. For the third straight day, I’m writing the exact same thing about a bad team getting blown out. The Celtics scored 40 in the fourth quarter to make this seem like a close game. Al Jefferson had 15 and 17. Jamaal Tinsely had 28, 7, and 6. But, people got upset when I praised KG for beating the Suns instead of glorifying the greatness of the Suns winning streak. So, it’s time to give thanks to another great streak. The Celtics have now lost 12 in a row, and what makes this one special is that Delonte West guaranteed victory. Didn’t Doc Rivers get fired from his job as coach of the Magic when he started the season on a streak like this? The Celtics are going hard after Oden.

DALLAS 122 SEATTLE 102
Austin Croshere scored 34 points. In 23 minutes he hit 7 of 10 threes. Dirk had an off-night, Josh Howard didn’t play, and Ray Allen scored 35 and it didn’t matter. The most significant event attached to this game is the birth of Josh Howard’s first child. Congrats Josh! I bet that kid has a wingspan of 5 feet already. Did it take a miracle for Croshere to have a night like this? Only the miracle of life.

MIAMI 110 MILWAUKEE 80
Something else I observed on Sportscenter the other night was Chicago native and Miami resident Dwyane Wade breaking down the SuperBowl. He did a really good job and Stuyah half-jokingly said “You want a job? We could fire Sean Salisbury.” Is that a joke, or was he referencing the infamous cell phone photo? Dare I say it, Stuart Scott made a funny joke, and he did it using the lost art of subtlety. Maybe there’s a lesson in that. As for the NBA game I should be writing about, it was yet another blowout. Dwyane Wade had 28, 6, and 6 and the Bucks were nothing like the team that beat the Knicks the other day for their second win in 14 games. Michael Redd is gaining MVP votes the more time he misses.

One last thing that I can’t help but mention. I have a friend that did the same thing that Sean Salisbury did. His reasoning for having the photo is a recent surgical procedure he underwent, that if I were to explain here you would most likely throw up on your keyboard. One difference between him and Salisbury is that instead of showing everyone at work, he did so at a party when he was wasted out of his mind. That was a great night.