The D.A.Y. the Knicks and Nuggets responded 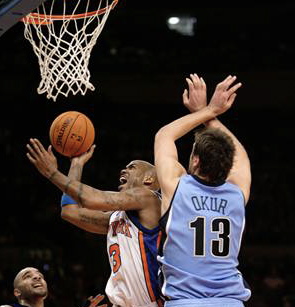 Suspensions in effect. Home games in front of angry fans against alleged good teams. The Knicks and Nuggets both played hard in front of their home fans with their shortened, watered-down rosters. And they both won. The Utah Jazz came into NYC and lost. What a crazy season. Great coaching from both Isiah and George Karl, as much as it pains me to give praise to either one of those two. UNC is the new Opus Dei, and I really am convinced now that Isiah had plastic surgery to keep a permanent smile or glassy empty look on his face at all times. I hate to quote Chris Berman here, but “That’s why you play… the games.”

NEW YORK 97 UTAH 96 OT
I wish I skipped the office holiday party last night so I could have seen this. The Knicks were down to 8 players, one of them being KELVIN CATO who played 16 minutes. David Lee grabbed 20 boards and hit 8 of 12 shots for 17 points. Jamal Crawford wasn’t as great as David, playing 43 minutes and hitting 2 of 12 threes. Anyways, the Knicks had a lead and they blew it in the fourth. Utah forced OT when Deron Williams crossed Stephon up and drilled a three. In that overtime, Williams hit step back jumper over Crawford, giving the Jazz a one point lead with 3 seconds left. David Lee threw a perfect lead pass to Starbury, who caught it in stride, got right to the hoop and laid it up with Memo Okur letting him in. Stephon was then smart enough to run off the court without celebrating too much, hoping that the refs wouldn’t have time to review it an overturn the basket. That didn’t matter, the basket was good. 29 and 8 for Steph, who has suddenly put together back-to-back games with Stephon Marbury numbers. Boozer and Williams had 23 each for Utah. Isiah was forced to play Frye and Lee 44 and 45 minutes respectively. That’s what you want to see out of a young team. Eddy Curry was limited to just 22 minutes by foul trouble. Amazing win for the NY Knicks. Probably Stephon’s finest moment on a basketball court since he bailed out Team America in the Olympics two summers ago with some streaky hot shooting.

DENVER 117 WASHINGTON 108
In the Wizards defense, they were playing the second game of back to back, and they suck on the road. That’s not really a defense though, it’s a pathetic excuse. The Wizards are now 3-9 on the road. George Karl got his team to respond with one of the top scoring tandems in the league missing. The Nuggets jumped out to a big lead, leading by 20 after the first quarter. Washington made it’s run, but the Nuggets held them off. Gilbert followed up 60 points with 30 shots, hitting 10 of them. 23 for Gil, 26 for Butler, 21 for Jamison, but they shot under 40% as a team. Marcus Camby stepped up with 25 and 17 plus 7 blocks. Earl Boykins had 29 off the bench, and Andre Miller had 27 and 9 boards. David Stern’s intention was to punish the Nuggets as a team by hurting their playoff chances, but they gained ground on division leading Utah, with help from the team that brawled with them.

MEMPHIS 134 SEATTLE 126 2OT
Here’s the real test to decide whether every double OT is an exciting classic. Sonics-Grizzlies, double OT? Yeah sure, why not. In the first OT, Rashard Lewis missed a free throw that would have made it a 4 point lead for Seattle, and the game would have been over. Chucky Atkins flew up court, launched a bomb from right inside the half court line. Tie game, double OT, where the Grizz ran away with it. This game kept Philly on top of the race for lottery balls. 36 and 14 for Rashard in the loss. Mike Miller and Chucky Atkins combined for 9 threes and 57 points.

MIAMI 101 NEW ORLEANS 99
Dwyane Wade came back from his wisdom tooth removal forced abscence (I FEEL YOUR PAIN, Dwyane) to score 13 of his 29 points in the fourth, hitting a tough jumper to win it with 1.3 seconds left. The Hornets responded by running a play for Jannero Pago. Uh… it didn’t go in. Chris Paul had 26 and 8, and Rasual Butler added 21.

NEW JERSEY 105 GOLDEN STATE 97
Ben Osborne gave me a ride home from the holiday party, and we listened to the end of this game on the radio. More importantly, Ben questioned my judgment when I suggested the fastest route to get to my place. Never ever do that again. The radio guys were praising Nenad for playing his best game of the year, with 26 and 14. Jason Kidd had another triple double with 10-11-12. Baron Davis nearly had one of his own with 25-8-9 and 8 turnovers. Vince struggled and the Nets still won. They need those kind of wins every now and then. The Nets held the Warriors to 13 points in the fourth. Lawrence Frank was not displeased.

DALLAS 109 SACRAMENTO 91
Brad Miller dropped the hammer on Dirk, picking up a flagrant. No brawl ensued. See, you only hear about the negative stories. I would like to celebrate the Dallas Mavericks and Sacramento Kings for NOT brawling. How do you spell class act? D-I-R-K. As for the game itself, Kevin Martin didn’t play, Josh Howard torched Ron Artest, and the Mavs won easily. 28 for Josh, 29 for Dirk, and I’m left with this thought: even if the suspensions were to derail the Nuggets season, the Kings might not be interested in taking their playoff spot from them. Brad led Sacramento with 19. I think they should do whatever they have to do to get Iverson. Even if they have to take Webber back.