The D.A.Y. the Mavs finally lost 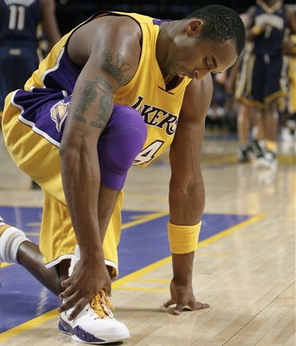 Khalid is not going to want to hear this, but his Eagles victory last night actually HELPED the Giants. Wild Card race, we’re back in it. The next two weeks, the Giants get to face the QBs that beat them in their last two playoff losses. Delhomme and Garcia. REVENGE!!! Bwah hahahahahhahahah!!!

I didn’t watch the game though. Watched the season finale of The Wire. It’s over. Now what am I supposed to do with my life? The ending has The Empire Strikes Back level cliffhangers, and I am looking forward to the next season. Fow now, I will have two Wire related Separated at Births for you later today, both of players that are mentioned in my game write-ups below. Then I’ll try not to talk about The Wire so much. If that’s possible.

WASHINGTON 106 DALLAS 97
The Mavs finally lost after those 12 straight wins. Gilbert Arenas has been calling out the word “Hibachi” when he’s heating up, and that worked for 38 points. It wasn’t just the Gilbert show though. The Wiz put Dallas in a hole, and even with the inevitable run the Mavs were too far behind to make a real comeback. Dirk had 27 for the Mavs in the loss while all five Washington starters reached double figures, SLAMonline columnist Etan Thomas had a double double, and the Wizards had a big win. They still do not have any road victories.

ORLANDO 92 SACRAMENTO 89
This game was closer. Ron Ron didn’t play, Dwight got back to his usual deal with 18 and 16 on 7 of 9 shooting, and Jameer Nelson hit the game winning three off a screen with 1.7 seconds left after passing up what could have been the winning shot with 6 seconds left, giving the Kings a real shot at tying or winning.They didn’t have one, and Orlando won with better execution. Who’s a young inexperienced team? The Magic won at Sacramento for the first time since Mitch Richmond’s first year with the team.

LA LAKERS 101 INDIANA 87
There was a basketball game played that the Lakers won pretty easily. But the big story on everyone’s mind is Kobe’s ankle. He came down on Jeff Foster’s foot and that was it. He still led the team in scoring with 21 points in 21 minutes, but he says he most likely won’t play against New Orleans on Wednesday. Jermaine O’Neal 18 and 11 in the loss. It was 60-44 at halftime, and the game was over already. Lamar Odom had 15 and 13 for L.A.

UTAH 101 MILWAUKEE 88
Michael Redd did not explode for 57 this time, and therefore the Bucks had to settle for a regular loss instead of nearly coming all the way back and losing. Carlos Boozer led the Jazz with 30 and 13 and Memo had 17 and 13. The Bucks frontcourt of Bogut and Patterson and Gadzuric and Skinner and anyone else you want to throw out there as a sacrificial lamb, had nothing to stop the Jazz up front. Charlie Bell had 23 and the Jazz D held Redd to 18 on 6 of 15 shooting.

CHICAGO 100 BOSTON 82
The Bulls are red hot ever since that dumb “controversy.” The Celtics are the opposite, and not even a dumb controversy can save them. Paul Pierce was held to 8 points. Not a winning formula for them. Nocioni led the Bulls with 20 and 7 on 8 of 10 shooting. Luol Deng played D on Pierce for a lot of the game and afterwords he said “You all can give us credit for playing well, but he might be injured.” If he’s not actually injured, then OUCH! Luol, that’s cold.

NEW YORK 98 MEMPHIS 90
The New York Knicks are 2-0 against a team from the West. Take that Eastern Conference haters! This game was not sold out. If my cousin Noah happens to be reading this, you can get Knicks tickets easily. Don’t need to go through me. The Knicks almost blew this game, but got a big shot from Quentin Richardson down the stretch and the Knicks held on. Q, Eddy Curry, and David Lee each scored 20 or more. Curry has been on a seven game run of 20+ scoring nights. Is he finally putting it all together? In this game he had 26 and 15. Hakim Warrick led the Grizzlies with 19 and 7. They’re bad. David Lee had a 20-11 night in 40 minutes after starting. Do NOT take him out of the starting lineup Isiah.