The D.A.Y. the Suns ran into KG 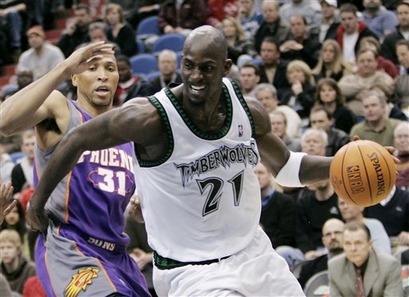 Even if the T-Wolves season ends up being a disappointment, or a disaster if you want to use stronger language, they’ll always have this one moment.

MINNESOTA 121 PHOENIX 112
All streaks come to an end. Steve Nash had 12 assists at halftime, and even though the game was close and in Minnesota, you’d think the streak would keep going. Kevin Garnett put a stop to that with 44 and 11. Minny shot 59% from the field and only turned the ball over 8 times. The Suns still had their usual monster shooting numbers, 50% from the field, 15 of 36 threes, and 23 of 25 from the line. And they lost. So this kills the perception that you can’t beat the Suns by getting into a high scoring game with them. Really the key to the game was that Amare had a rough night with only 10 points and 4 boards in 39 minutes. But again, great win for the T-Wolves. KG deserved this.

NEW JERSEY 116 UTAH 115
I watched large chunks of this game, including the last few minutes. The Nets didn’t give the ball to Vince and let Kidd try to creat something that got him trapped and led to a turnover. I was ready to hate on Vince for not even going near the ball on that possession. The Jazz let the Nets get the two while guarding against the three. Vince threw down a highlight film dunk, with nobody within 5 feet of him that – again – the other team gave up. If you wanted to hate on Vince, you could if you so chose. Deron Williams missed a free throw making it a 2 point game. Vince had about 5 seconds to either go for the tie or the win. I thought he was moving kind of slowly upcourt, he got a beautiful screen from Mikki Moore and nailed a DEEP three. Nets win. Vince did it. This is one of those basketball Gods reversal things. Amazing shot. Vince finished with 33, Kidd had 22 and 10. Deron Williams led the Jazz with 25, but he missed that one free throw. Jerry Sloan missed the game with the flu. With that info, it’s not surprising that Utah gave it up down the stretch. What is suprising is that something as soft as a flu could cause Jerry Sloan to miss a game.

CHARLOTTE 105 DENVER 101
This is not the AnswerMelo’s finest moment. Losing at home to the Bobcats? Gerald Wallace had a big night with 25 and 13, Okafor blocked 5 shots, Matt Carroll added 14, Felton had a 16 and 11 game. Lots of Cats contributed to the win. The Nuggets got 31 from A.I. on only 15 shots (and 12 free throw attempts) and 25 from Melo. Other than that, not much. The Nuggets last shot, a three with a chance to tie, came down to… J.R. Smith? He ended up 1 of 9 from three for the game. Melo had fouled out by then, but still. Hey, the good news is that Allen threw some lead passes to Carmelo for dunks.

MEMPHIS 124 SACRAMENTO 117
If Pau Gasol is unhappy and wants to be traded, he really is a true professional and is not letting it affect his play. Or he’s trying to boost his trade value. 34 points on 14 of 17 with 8 boards and 8 blocks. Monstrous. It’s too bad he chose this night to put up that line, cause KG is going to be Player of the D.A.Y.. Bibby, Martin, and Ron Ron each scored in the 20s but Gasol really stepped up in the fourth when the Grizz scored 41.
HOUSTON 105 PHILLY 84
It was much worse than a 20 point game. Philly outscored Houston 33-16 in the fourth to cover some of their shame. 20 and 10 for Juwan Howard, and McGrady had 25 on 8 of 14 shooting. I’m going to leave Philly out of the conversation much like I did not mention anything Seattle did in their blowout loss on Sunday. Iguodala had a decent game.
ATLANTA 93 ORLANDO 83
The Hawks kept Dwight Howard under control and a healthy Joe Johnson had 34. That’s three 30+ games for Joe against the Magic this season. He’s a southeastern division monster. The Hawks used a 13-0 run to put the game away. Orlando was led by Grant Hill’s 21.

NEW ORLEANS 103 PORTLAND 91
One of the strangest trends of the season has been the volume scoring of Jannero Pargo. He was the crunch time star for New Orleans. David West led the way with 21 and 10. Z-Bo was held to 20 and 13 and Brandon Roy added 19. This was a top heavy night of NBA basketball. Big news in the Suns-Twolves game, excitement with Jazz-Nets, the sorry letdown/upset in Denver, big scoring for Memphis, and then the rest of the slop which I have glossed over as quickly as possible. Finished this at night so I don’t have to get up too early and do this before a meeting we have in midtown.