The D.A.Y. the Titantic division sunk even lower 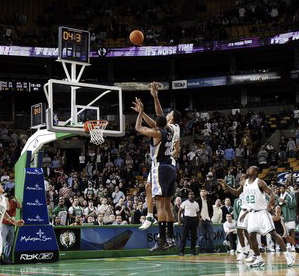 Much has been written about the Leastern Conference and the Titanic Division. Last night was the perfect example. The struggling New Jersey Nets didn’t play, and therefore did not lose a game. EVERY OTHER TEAM in the Atlantic did. Some of them in embarrasing fashion. I’m killing 4 birds with one stone here. Thanks for making my job easier Atlantic Divsion!

THE NBA 4 ATLANTIC DIVISION 0
Washington had no road wins. They played the Knicks in NYC. Problem solved. They shot 14 of 20 from three. Nice D, Knicks. Gilbert had 38 and Jamison had 33, though either one of them could have scored in the 50s is they wanted to. Philly was outscored by Ben Gordon himself in the first quarter 17-16 on the Sixers way to a 121-94 nightmare with the Bulls shooting 62%. Toronto lost to Cleveland, but it took some late game domination from LeBron to make that happen. The Raptors at least fought until the end. Boston lost at home to Memphis, after the Grizz blew a 17 point fourth quarter lead. Rudy Gay hit the winning shot. Gerald Green keyed Boston’s comeback, but he also left Rudy open for the shot. And once again, the Celts lost at home to arguably the worst team in the league. If that doesn’t say ATLANTIC DIVISION BASKETBALL to you, I don’t know what does. So now that we got all of those winners out of the way, let’s move on the NBA.

NEW ORLEANS 105 LA LAKERS 89
Kobe gave it a go on his banged up ankle, but he was somewhat less effective than in the 52 point game. The Hornets are this year’s up and down team, and after the latest losing streak, they turned it around with Chris Paul’s 26 and 11, Tyson Chandler’s 12 boards and 3 blocks, and of course the revenge of Jannero Pargo, with 21 points. Kob had 24, Odom added 20, and that was pretty much it for thr Lakers. Phil Jackson on the new ball after the game said “I’m glad the commissioner is as capable of being changable as President Bush is on his policy in Iraq.” Interesting comparison of two men, Phil. I’m not going to say I don’t completely agree. Can you smell what the Barack is cooking?

ATLANTA 98 DENVER 96
First Lang discovers that Barack Obama has the same voice as The Rock, then the Hawks overcome a 15 point defecit to win in Denver. A great night at the Whitaker house. Atlanta scored 37 points in the fourth on their way to the win sealed by Shelden Williams free throws. Linas Kleiza’s dunk gave the Nuggets their 15 point security blanket, before the game fell apart for them. Melo had a rare sub-30 night, though he did have a big bucket to put Denver on top 93-92. Too bad. Salim Stoudamire scored 21 off the bench hitting 3 of 5 threes, and the Hawks won without Zaza, who was suspended for getting flagrant. The Hawks went with their zone defense, which somehow shook the Nuggets up at the free throw line, where they went 16 of 33. The Nuggets free throw shooting was worthy of Atlantic Division basketball. See how I tie it all together?

MILWAUKEE 102 PORTLAND 94 OT
After giving up a lead, the Blazers fought to get the game into OT, and Jarret Jack had his career night with 30 and 10, but Michael Redd got hot after the third and carried the Bucks. 19 points in the fourth and OT on his way to a 33 point night. Zach Randolph had a shot at the end of regulation to win it with a layup, but it didn’t happen. Ruben Patterson scored 26 against his ex-team.

INDIANA 94 ORLANDO 80
A few hours after finding out when his date in court will be, Stephen Jackson put up a season high 26 points. After the game he said “It definitely brings everything to your face and makes you more humble about stuff — I appreciate the game of basketball every time I step out there.” Was it his lack of humility that led to someone trying to run him over with a car? Did that lack of humility cause him to shoot his gun in the air? Whoooooooo! February 12th, the trial begins. The Pacers also got an 18 rebound night from Jeff Foster. Take that, Dwight. Al Harrington also had 26 for Indy and Dwight led the Magic with 20 and 8.

MINNESOTA 90 HOUSTON 84
Kevin Garnett described the TWolves team defense on Yao and T-Mac “Like a bunch of hyenas on two lions.” Works for me. That means they pestered the stars and laughed at them. KG also scored 24 with 12 boards and Mike James chipped in with 19. Yao and Tracy were held to a combined 10 for 40 shooting.

SAN ANTONIO 96 CHARLOTTE 76
Tim Duncan blew three dunks in the first quarter – maybe trying to make his last name ironic – but other than that the Spurs avenged their loss to the cats. Brevin Knight picked up 2 techs and was ejected in the third, and the Spurs took it from there. Sean May continued his second year emergence with 18 and 7. The Cats are going to be really good in about 4 years. Hopefully.