The D.A.Y. Vince fell in love with the new ball 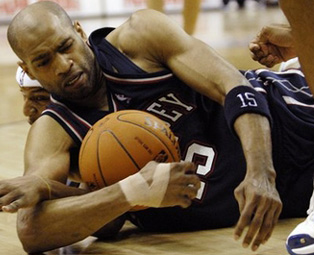 Over the weekend, Michael Redd had a 57 point game in a loss, Dwight Howard had his first 20-20 of the year, the Heat once again reminded the Nets who’s boss and Portland came back from 27 down to beat the Hornets. Oh, and I went to the Giants-Bears game last night which was fun until certain events transpired, and I might have pneumonia. It also took an hour to get out of the parking lot. That was very frustrating.

NEW JERSEY 105 WASHINGTON 93
Vince Carter got a new ball bounce on a desperation three at the buzzer to force OT and the Nets were in charge from that point on. Very strange. It hit that square piece of iron at the back of the rim, and gently dropped through. That came after the Nets blew a 16 point lead and Vince was called for a charge that looked like the game-sealing play. Vince came off two screens to hit that shot, which was a deep fadeaway three with Gilbert Arenas a little bit late getting there. I guess I should mention some people other than Vince, who had 34. Jason Kidd had a triple double with 18 assists thrown in. He’s still got it. And I was about to post my game notes from a Friday night trip to the swamp where Kidd looked old and slow. Guess that was just an off night, cause he looked crisp in this game. With RJ out, Nenad took 18 shots and scored 22. The Wizards were ice cold most of the night, with Gilbert shooting 6 of 23. The play that forced OT must have really crushed them cause the Nets outscored them 18 to 6 in that extra period. Caron Butler had 17 and 12 with 3 steals in the loss.

HOUSTON 94 MIAMI 72
Yao was dominant against Shaq, hitting his shot, 13 of 14 free throws, getting layups, and after the game he was quoted saying “Every time I score on him I was happy like a kid, like a kid getting candy on Halloween because it’s really too hard to score on him, too hard. He’s just great.” Wow, a self-applied metaphor! Shaq wasn’t as exuberant, saying “He’s pretty much the same, just big, 7-6. He’s just doing what he’s supposed to do.” And what he’s supposed to do would be scoring 20 in the second half on his way to a 34 and 14 night. Shaq finished with 15 and 10. If you were hoping for a Wade-Mac showdown, then this wasn’t your night. After struggling in the first half, the Rockets turned it on and outscored Miami by 25 in the second half, with Yao leading the way. Wade led Miami with a quiet 24 points.

LA CLIPPERS 92 NEW ORLEANS 76
The Hornets did it to themselves with a lot of self-inflicted turnovers. Elton Brand led the way for the Clips with 22 and 10, his first “Elton Brand” game since opening night. The Clips built their lead in the first half and survived a New Orleans run in the second half. Chris Paul had 6 turnovers, as the Hornets have gone from undefeated hottest team in the league to struggling in about 3 seconds.

DENVER 108 CHARLOTTE 101
The Bobcats are still playing like an expansion team, and Denver handled them easily. Sloppy game from the Cats with a lot of turnovers. Brevin Knight and Okafor combined for 13 turnovers, while Denver had just 15 as a team. Carmelo led the Nuggets with 36. It seems like the craziness of the first few weeks is settling down.


DALLAS 103 PORTLAND 96
The Blazers had their chances to win when they cut the Mavs lead to one with a little over two minutes left, but Jason Terry hit a three and Nate McMillan got a T, and that was that. The big news of the game for Portland was the NBA debut of Lamarcus Aldridge, who scored all 10 of his points in the fourth quarter, including the basket that got the Blazers to within a point. He also had 8 boards. Dirk and Jason Terry combined for 50, as the Mavs are getting that winning feeling back again.

SACRAMENTO 107 TORONTO 92
Ron Artest put up 15 points in the first quarter, hitting his first six shots, and the Kings were in control pretty much the whole way. Ron finished with 23 and 10, and Kevin Martin continues to put up numbers with 26 points in this game. Chris Bosh led the Raptors with 19 and 7, but TJ Ford had 8 turnovers, which seem to be the theme of the day for losing teams. The Kings do not lose at Arco.

LA LAKERS 91 MEMPHIS 81
The Lakers led 49-30 at the half with Kobe and Lamar Odom really playing well together. Kobe with 21-6-6 and Lamar 20-16-7. Two guys playing the all around game, getting their teammates into the flow, and ending a 2 game losing streak that way. Mike Miller hit 6 of 10 threes on his way to a 21 and 13 game. The Grizzlies are not very good.