The D.A.Y. with Philly and Atlanta on top 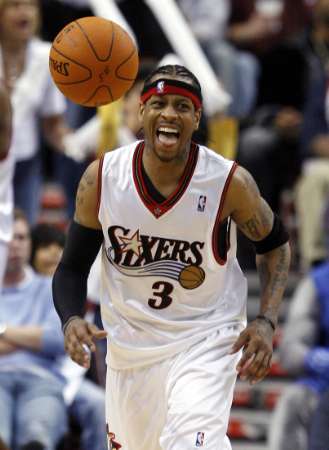 We’re through the first weekend of the NBA season. Notable games that I didn’t get around to cause it was the weekend and I was BALLLIINNNGG out include the Bobcats upsetting the Cavs which came a day after LeBron and the Cavs huge performance down in San Antonio, which came a day after San Antonio’s huge performance in Dallas. Which came after… I’m just playing. Big wins for Charlotte and Cleveland. Gilbert came back strong after his bad opening night with a 44 point explosion against the Celtics, Yao was dominant against the Mavs in a blowout win for the Rockets getting some help from Rafer but not much from T-Mac. The Clippers beat the Suns in a rematch of the Western conference Finals, with the Clips pounding Phoenix inside and on the glass. Miami beat up on the Nets as always, shaking off their season opening rust. Those were some of the key games from Friday and Saturday. Moving on to Sunday.

I’m going to need some help from you filling in the blanks here. I’ve moved beyond the fast food eating portion of my life, but this past weekend, me and my girlfriend stopped at a Burger King highway rest stop twice on our way to and from a wedding, where we ate and drank heavily. The weekend was fun. The consequences are not.

PHILLY 107 MIAMI 98
Shaq didn’t play, cause he’s fragile these days. Lots of wear and tear on that big body. The Heat led at halftime without him, but Philly had a big defensive third quarter to grab the lead. How long have we all been wondering what Allen Iverson will do to adjust when the injuries and age take their toll and he’s slowed down? It still hasn’t happened, as he’s scored 30+ in all three games and Philly is a surprising 3-0 to start the season. Oh, he also thad 13 assists along with that, and he survived getting called for a tech in the first quarter by not picking up one of these new style hair trigger techs. Kyle Korver hit 5 threes off the bench. Looks like somebody’s figuring out his role.

ATLANTA 95 ORLANDO 82
The Hawks held the Magic to 11 points in the first quarter in this battle for future supremacy of the Southeastern division. Dwight Howard was in foul trouble and only played 24 minutes. Carlos Arroyo picked up what slack he could, going 9 for 9 from the field. Joe Johnson led the Hawks with 31, Zaza chipped in with 17, and Lang is celebrating because the Hawks are in first place and above .500 for the first time since 2002.

SAN ANTONIO 103 TORONTO 94
The Raptors jumped out to an early lead, but the Spurs are still too good for them, especially with the Tim Duncan Robot looking recalibrated on his way to 26 points. Bones Barry hit all five of his threes and Tony Parker chipped in with 19. Chris Bosh had 19 and 17 in defeat, stealing a bunch of rebounds form his teammate Rasho who was playing a revenge game. Who am I kidding? Rasho grabbed 5 boards and didn’t do much else against the team that cut him loose while Fabricio Oberto went for 12 and 9 in 24 minutes hitting 5 of 6 shots.

NEW ORLEANS 96 HOUSTON 90
Shane Battier led the Rockets in scoring. That’s all you need to know about how Houston played. Chris Paul racked up 16 assists with David West scoring 22 and Peja hitting on 5 of 8 threes. How many times have I mentioned someone hitting exactly 5 threes in this D.A.Y. so far? If you don’t hit 5 threes, you just don’t hit them. The Hornets won their New Orleans post-Katrina debut, biting the Saints idea, but with much less uneccessary political grandstanding on national TV. Interesting that their first home game would be against Houston, a city whose population is full of those who escaped from New Orleans in the aftermath of the storm.

SEATTLE 117 LA LAKERS 101
The Sonics held the Lakers to 18 in the second quarter, then put up 38 on them in the third. Ray and Rashad combined for 57 points and 9 of 14 threes. These are all things that lead to a Sonics win. Kobe hasn’t gotten into his scoring groove yet, so he dished out 9 assists and picked up a technical (who hasn’t?). The Sonics avoided falling into a 0-3 hole to start the season, while Young Andrew Bynum continues to impress, scoring 13 in the first half, though logging just 18 minutes and one foul in the game.