The Destroyer in Winter 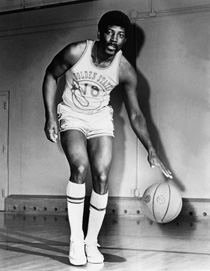 In Oakland, the press sits about halfway up the bleachers, just in front of the luxury boxes and overlooking the benches. Each of the three rectangular media tables, with live box score monitors and power strips for laptops, is bracketed by a small bay with two seats inside a low plexiglass enclosure.

One of those bays is always reserved for Alvin Attles, now in his 50th year with the club that drafted him. He arrived as a fifth-round pick in 1960, a 6-foot-nothing point guard with so little chance of making the roster that he almost didn’t bother showing up. He eventually became the Warriors’ captain, one of the most successful NBA coaches of all time, the team’s GM, and over the past couple decades an ambassador to the local community. The man they used to call “The Destroyer” has never worked for another professional franchise.

He looks pretty much the same every game. Attles wears a lightly starched, solid-colored dress shirt with dark slacks, and leaves his blazer sitting in the seat beside him.

Before tipoff he is all smiles as fans walk by and wave to him, many of whom he knows by name. But if left by himself while the Warriors struggle, he rocks uncomfortably, the same way he did as a coach, and can’t restrain a cringe when they turn it over or have a defensive breakdown. If things are going very poorly, he sometimes has the bearing of a man who is about to crack heads.

If this is how intense he is at 73, what was he like when he was younger?

“He was a hard-nosed defensive specialist, and nobody messed with him.” says Jim Barnett, former NBA player and current Warriors broadcaster.

Later in his career, Barnett was traded to the Warriors and played for Attles the coach. “As a coach, he hardly ever raised his voice,” Barnett says. “But when he did, it scared the hell out of you. Literally sent chills down your spine.”

I spent a game with Attles in his perch, and that voice is one of the first things you notice. Rising above the crowd noise it’s a cross between Tom Waits and Teddy Pendergrass.

The conversation started light — we discussed his beginnings in Newark, NJ; how he was drafted in large part because his college teammate at North Carolina A&T had been a high school teammate of Warriors’ star Wilt Chamberlain; and the formation of the NBA player’s union. Attles, whose first salary was $5,500 annually, was an early player’s rep.

“We were looking for two more dollars on our meal money,” he said in his trademark rumble. “We were getting five dollars, and we ended up getting seven.”

I’d approached Attles a couple weeks previously, but it hadn’t gone well. An oldster friend had told me about his favorite player, Cy Kasselman, who dominated in the 1920s and 30s for a Philadelphia team that was a precursor of the Warriors. He held the all-time single-game scoring record for a few years thanks to a 28-point night. Kasselman’s coach was Eddie Gottlieb, who later became the owner of the Philadelphia Warriors, the team that drafted Attles two years before moving to the San Francisco Bay area. I couldn’t find much on Kasselman in the history books, so I asked Attles.

His face twisted up into a shape that made it clear he wasn’t comfortable. “I remember him,” Attles said. “He used to come to some of our games, but I didn’t really know him.” Usually old players are happy to talk about older players, and I’d taken every precaution – approached carefully, called him Mr. Attles, and asked if he minded answering a question about the Philadelphia days. The most I got out of him was that Kasselman was friends with Gottlieb. I didn’t realize until I’d walked away why a question like that would stir ancient emotions.

Gottlieb, a Hall-of-Famer who later worked in the League offices, enforced the NBA’s unwritten quota system. During the game we watched together, Attles cleared the air early in the second quarter.

“My first year we had four black players on the Warriors, and my second year we only had three. Some teams only had two. I don’t know the reasons why, but I do know there were players out there who could have played.

“Years later Eddie Gottlieb apologized to me. He said that if he had known that people would pay to see players who weren’t Caucasian, he would have done it (integrated the roster).”

Attles arrived in a San Francisco Bay Area that was a melting pot unlike any other in America. He settled in a working-class neighborhood called Haight-Ashbury, which would soon become the capital of the hippies.

“We lived right on Haight Street,” he said. “One summer we went back to New Jersey, and that following fall, it had changed completely. We lived at the top of a hill, and we had a hard time getting home. They had hippies and the whole City of Love and all of that, and we had to go through some road blocks and things like that to get up to our house.

“A few years later, it ended almost as suddenly. I guess they all moved to the suburbs.”

Attles got the Destroyer moniker as a rookie, after he and Hall-of-Fame big man Dolph Schayes went for a loose ball. Attles wound up with the ball, and Schayes wound up with a broken jaw. Attles, however, doesn’t like to play up his “Destroyer” past.

“It wasn’t anything … I didn’t punch him … his teammate started all that business about, ‘he’s a destroyer.’”

Already having broached one sensitive topic, it didn’t seem worth mentioning other incidents, such as the time he picked up and body-slammed future Bullets GM Bob Ferry WWF style.

At halftime Attles invited me to follow him as he went to meet a group of fans in a luxury suite. They were business partners of the man who rented the suite. As a goodwill ambassador for the team, Attles makes appearances like this on a regular basis.

When we walked in a man approached and said his daughter was inside. She was a pretty good grade-school player and loved the game. Could Attles give her some encouragement?

The group inside surrounded him in a semi-cricle. The girl, tall for her age, stood in the front with her arms folded.

The businessman introduced him: “Ladies and gentlemen, this is Alvin Attles, Hall of Famer and former coach of the Golden State Warriors…”

“I think you have the wrong guy,” Attles said, embarrassed. The group laughed, and most probably still thought he was in the Hall of Fame. Attles didn’t bother trying to dissuade them further, and launched into his talk.

“OK, raise your hand if you’re a Warriors fan.”

A thin majority of hands went up. Then Attles asked everyone in the room to close their eyes, and told them again to raise their hands if they were Warriors fans. More hands went up than before.

He talked sincerely about wearing the team colors proudly, and paged back through his career. The night Wilt scored 100 points. Two trips to the Finals as a player – one as point guard to Wilt, and another on a Rick Barry-led team that lost to Wilt’s 76ers.

The subject of Chamberlain is unavoidable wherever Attles goes, and his story is the same whether he’s in private or polite company. Wilt was a gamer and focused during the season. The most carousing they did together was the occasional midnight movie. Wilt was also generous with his friends – when he got traded to the Sixers, he offered to let Attles drive his custom Rolls for the rest of the season.

He touched on his winning seasons as a coach in the 1970s, including the 1975 NBA Championship team that pulled one of the biggest Finals upsets ever. Throughout, Attles downplayed his role and talked about the stars, but it was still red meat for fans that have had one Playoff appearance in 15 years.

Suddenly he stopped and looked down at the girl.

“You don’t believe anything I’m saying, do you?”

Without changing expression, she shook her head.

As we walked out, Attles explained how he used a similar motivational tactic with his players after tough losses. He’d tell them to close their eyes, and then ask them to raise their hands if they left everything on the court. Regardless of their response, it had the desired effect.

We were nearly to the elevator when a woman who was inside the luxury suite chased Attles down. She looked to be in her late 20s.

“I just called my father and he is so jazzed about this. Thank you so much. It made my dad’s day.”

Attles’ undying loyalty to the Warriors was fostered by Franklin Mieuli, the owner who moved the team west.

It was Mieuli who fully integrated the team, who made Attles just the third black head coach in NBA history (after Bill Russell and Lenny Wilkens), and who yelled at Attles when Attles let him know that he was going to carry more black players on the roster than the season before.

“Mr. Mieuli said, ‘just take the best players you can get.’ I didn’t care what they looked like, and neither did Mr. Meuli.”

After 13 ½ seasons behind the bench Attles was one of the 10 winningest coaches ever, with more than 550 regular-season victories.

As the GM, he helped build the foundation of the Warriors’ last winning era, drafting future Dream-Teamer Chris Mullin. But when Mieuli sold the team, Attles moved into the background.

Finally, with about 4 1/2 minutes left in the game and another Warriors loss all but in the books, the truth about The Destroyer came out. By the time he was pushed aside, Attles was burned out.

“It affected my family when everything started going bad. Where I live, I have a room where I keep all my music. When things were going badly, I would hole myself up in there and just play music – with my family still in the house. They knew when things weren’t going well. It was time.”

At the buzzer I thanked Attles for sharing his seats.

“Call me Al,” he said, smiling as he shook my hand. He was gripping it so hard, I nearly called him Mr. Attles again.

Fans started to filter up the aisle for a moment with the impenetrably gregarious Attles. It was a typical Bay Area socialocracy – they were male and female; gay and straight; black, white, Asian, and combinations thereof. A crowd that would not have been possible when Attles was drafted. Attles loved them all, and they loved him back.

Most of them probably couldn’t imagine that anybody would call him The Destroyer.

If you want to hear Alvin Attles for yourself (and decide if I was right about his voice), check out this excellent interview with him: