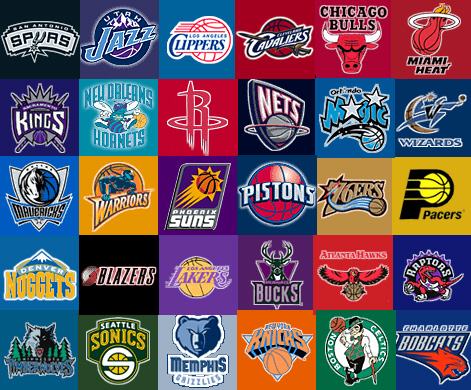 I’m a few days late with this Dirty 30. For that I apologize. I could make a bunch of excuses, but I won’t. Let’s just move on. And I present to you, the latest Dirty 30 in artistic and verbal form. If you need more information on how to read the picture, refer back to the previous D30.

This is the most hectic time of the year for the D30. Some teams went from a slump to red hot (Sacramento and Dallas) and others went vice versa (Philly). That makes for erratic movement. And I like erratic.

1. (1) San Antonio (6-2) Robotic and efficient, and they can still come back from down 19 with their bench playing.

3. (2) LA Clippers (5-2) The Clips were playing great until the Utah game. Can you believe Clippers-Jazz was one of the biggest games of the young season?

4. (4) Cleveland (6-2) Best record in the East. They haven’t lost since the meltdown vs. Atlanta. Is it possible that the gap between West and East is getting even wider?

6. (10) New Orleans (6-3) Streaky. Very streaky. Unstoppable, then a three game losing streak, and now they’re winning again. I don’t know how much I trust them. Peja looks good though.

7. (11) Houston (5-3) YAO is dominating. T-Mac is getting his explosiveness back. If they didn’t blow that game to the Spurs they would have had a shot at that number one spot.

8. (3) Dallas (3-4) Much better than their record shows. The doomsday stories about their 0-4 start were premature. The Mavs have won three in a row and their next three gams are two with Memphis and one with Charlotte.

9. (6) Chicago (3-4) The memories of their opening night destruction of Miami are still carrying them. Since that game, the pattern has been they lose to good teams and beat the bad ones. That is a recipe for .500.

11. (13) New Jersey (4-3) If it wasn’t for Miami, they would only have one loss. When Vince scores 30+ they usually win. He’s been doing that alot this year. And Jason Kidd can apparently still carry a team on some nights.

12. (27) Golden State (5-3) Baron is healthy, and when he plays well and asserts his leadership, they win. Nelly seems to have brought a winning mentality and he’s keeping Adonal Foyle glued to the bench.

13. (5) Phoenix (2-5) They were on national TV every night the first week and a half and now it feels like they haven’t played in a month. Bad start to the season and everyone wants to know what’s wrong with Phoenix.

14. (25) Orlando (6-3) Jameer Nelson was about to get benched for Arroyo, and now all of a sudden he’s leading them in scoring every night. They’ve had a light schedule, but give the Magic credit for beating who they play.

15. (18) Denver (3-4) Carmelo is red hot right now. In fact in games where he hasn’t been ejected for a BS technical, his lowest output is 28 points. The Nuggets are joining Dallas as a team that’s off the matt and back in the fight. Of course Kenyon’s knee injury doesn’t help.

16. (12) Washington (3-4) This team has too much talent to be so dependent on whether Gilbert is hot or not. They don’t play any defense.

17. (8) Detroit (3-5) Their three wins are against Boston, Memphis, and the Lakers. These are not the Pistons that ran away with the East last year.

18. (23) Portland (4-5) I’m as shocked as you that I have them this high. Zach Randolph is dominating the post and his numbers are leading to wins.

19. (14) LA Lakers (5-3) The loss to Detroit keeps them below the Pistons. Still waiting to see what kind of team the Lakers are. The young talent and Lamar are clicking, but they still lost at Portland.

20. (15) Philly (4-3) The only other team that I can think of that’s been so dependent on one person to do everything is the Dan Marino Dolphins. The Sixers have been streaky just like Iverson has this year. The next to games are at Phoenix and at the Clippers. I believe that Philly may have peaked already.

21. (17) Minnesota (3-4) Oh. This team is kind of in the same boat as Philly. Except KG is more consistent and their games are determined by whether or not one of his teammates can get hot. That hasn’t been happening much.

22. (24) Seattle (4-5) The joy of a jump shooting team. Hot and cold. They’re marshmallow soft in the middle. But Ridnour is playing great, and when Ray and Rashad hit their shots they have a chance. That doesn’t always happen.

23. (19) Indiana (4-4) The Pacers are not playing well. Al Harrington has led them in scoring the past 4 games. I give Carlisle the benefit of the doubt and say he’ll figure the best way for them to attack.

25. (21) Atlanta (4-3) After the win in Cleveland, flying high. After losing a tight game with some fourth quarter trouble, same old Hawks. First place was great while it lasted.

27. (28) New York (3-6) The schedule has been rough, but the Knicks are starting to show signs that they will play hard this year. The kids are going to steal veteran jobs soon if they keep this up.

28. (29) Boston (2-6) We went from thinking Ainge was crazy for dumping good players to thinking he might be on some next level genius by going young. Now it looks like the first thought was right. The Celtics are the worst they’ve ever been since I’ve been watching basketball. No disrespect to the Rick Pitino and Dino Raja teams.

29. (26) Charlotte (2-6) Emeka Okafor is back and better than ever and his back looks better than ever. He’s playing great, Adam is starting to come alive, and they still look like an expansion team. Huge legitimizing win over the Spurs last night though.