The End of Linsanity in New York 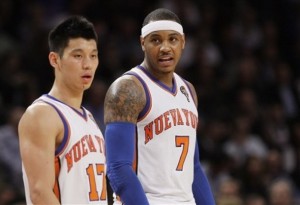 I suppose that one could make the argument that the Linsanity phenomenon ended when Carmelo Anthony rejoined the New York Knicks’ lineup earlier this month, but now that Mike Woodson has replaced Mike D’Antoni on the bench, Jeremy Lin’s days of being the team’s offensive catalyst are a thing of the past.

Woodson announced the death knell of Linsanity in comments to reporters about the new system he will put in place, one that will see Anthony and Amar’e Stoudemire getting the lion’s share of touches and shots.

From SLAM contributor Jake Appleman, writing for the NY Times:

Woodson ran his first practice and began to make it clear to his players that this is now his team, at least for the rest of the season, and not Mike D’Antoni’s. That almost certainly means it will be a Knicks team that will slow things down on offense and run an isolation-heavy system more suited to Carmelo Anthony’s ball-dominating inclinations. “It’s everybody’s ball club,” Woodson said after practice Thursday, when he was asked if the Knicks were once again Anthony’s team, as they were before Jeremy Lin briefly took over. “I want everybody to feel comfortable. When I put a guy in the game, if he’s got a shot, I want him to feel comfortable about making that shot.”

But then he spoke more bluntly, saying that he wanted everybody to know that when “I’ve got to get a big shot, I’m going to go to Melo and Amar’e and guys that have done it,” a reference to Anthony and Amar’e Stoudemire. “A lot of these guys are young,” Woodson said in reference to their teammates. “They’re still trying to figure it out.”

Jeremy Lin momentarily appeared to have saved the Knicks’ season, leading them at one point to seven straight electrifying wins. But then Carmelo Anthony returned from injury, and it all went to hell during a nightmarish six-game losing streak, leading to the resignation of Mike D’Antoni.

Sad as this may be not just for Knicks fans, but for anyone who had fallen in love with the unbelievable-yet-true Jeremy Lin story, this is the way things were always supposed to be in New York. Team owner James Dolan didn’t gut the roster to acquire ‘Melo and STAT just to have them play second-fiddle to anyone else.

The Knicks will only go as far as Amar’e, Carmelo and Mike Woodson take them — frightening a thought as that may be for their fans.