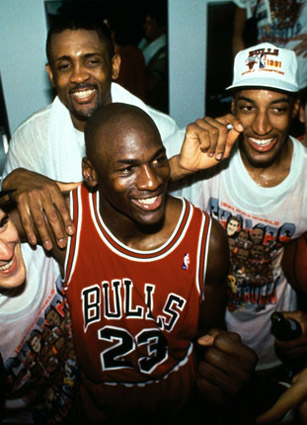 A few weeks ago, after the Heat ended the Bulls’ season, Scottie Pippen suggested that LeBron—in the midst of an iconic three-series Playoff stretch—might go down as the best basketball player in NBA history. Well, we know what happened after that—the Heat, specifically LeBron, came up short and small in the Finals. But, as I wrote earlier this week, pain can be good. Scottie and his Bulls felt that kind of pain before they finally got their first rings, on June 12, 1991—exactly 20 years before the Mavs hoisted the Larry O’Brien trophy on the Heat’s homecourt and then celebrated in its clubs—the Chicago Bulls beat the Los Angeles Lakers for the NBA championship. That Championship is a pivotal moment in NBA history for many reasons, but it’s also very relevant today, given what just happened and what the future holds. In SLAM 150 we printed an ode to that ’91 squad. You can read it below…

Let’s say you were tasked with making a basketball timeline for someone who had been living under a rock all his life. This timeline was to tell a linear story of the history of basketball from the time Naismith put up a peach basket until now. The rub is that you can only use, say, 20 plot points.

What goes on your timeline? Red Auerbach drafting Bill Russell? Magic and Larry meeting in the ’79 NCAA Championship? The ’72 Gold medal game between the USSR and the US? The NBA-ABA merger? The first time a ball bounced at Rucker Park? Do the Harlem Rens get on there?

This much we know: Michael Jordan, in some fashion, makes the timeline. And if you were to ask me which event during his career meant the most to the League and his legacy, I’d say it happened 20 years ago this month, when he won his first championship along with Phil Jackson, Scottie Pippen and the rest of the gang.

To commemorate this watershed moment in NBA history, I talked to some principal members of that team and the folks around them, as well as researched old articles, to craft a sort of oral history of that season. They painted the picture of a desperate organization and a driven squad led by a transcendent talent, all on a quest to exorcise demons, slay a nemesis, save faces, make names and win rings.

The Bulls previous season ended with a 93-74 Game 7 Playoff loss to the Detroit Pistons. It was the third season in a row the Pistons bullied the Bulls into submission. Jordan had 31-9-8 in that hostile final game, while his teammates submarined. It was Pippen’s “Migraine Game,” after which Pippen said, “I had trouble seeing my teammates.” Jack McCallum, writing for Sports Illustrated, quipped, “Not half as much as Jordan did, Scottie.” So we start here, early in the season, with the Bulls (Jordan included) on Front Street.

RICK TELANDER (Basketball evangelist, revered scribe, writer for the Chicago Sun-Times): You can’t imagine what it’s like to be a competitor like Michael and start to see your career go by and wonder if you’re ever going to get there. The last scoring champ to win a title was Kareem back in the ’70s. It was becoming a mantra: You’ll never win, MJ—you score too much.

DAVID FALK (Jordan’s agent, who, over the next 10 years, would become one of the most powerful men in sports): There were observers, including myself, that thought [Bulls general manager Jerry] Krause was trying to increase the degree of difficulty for Michael. I used to say that if you took Michael and Scottie and then you took three brandy sniffers and put the names of all the guards in one, forwards in one and centers in another and made 13 blind picks, you could come up with a better team than the one Krause constructed. He always wanted credit, so he’d take the long shot. The fact that they won those championships didn’t mean he crafted a great team, it was just that Michael was such a transcendent player. Michael had to convince himself that the team was good enough to win. I use this as a compliment when I say that he would con himself into thinking he had a great team.

The Bulls start 15-8. They show promise with a 20-point win over Boston and seven-game win streak, but the team, specifically Jordan, still hadn’t bought into what would become its signature Triangle Offense.

PHIL JACKSON (Bulls coach and eventual Zen Master, on his quest for the first of a League-record 11 rings, as quoted in Sports Illustrated): No, Michael doesn’t need the offense. It limits him, no doubt about it. But we’ve let Michael clear out and try to win it by himself and we’ve come up short. So let’s see if we can get other people involved, let the offense help them get their shots. It’s not like we’re saying Michael absolutely cannot win the scoring title. We’re just trying to reduce his points a little and bring our team total up, get better balance.

MICHAEL JORDAN (Bulls guard and the consensus pick for greatest player in NBA history, as quoted in Sports Illustrated): I fight the offense when we lose close games and I haven’t given the output I could’ve given because of the system. On the nights we win, obviously, it’s fine. I only want to win. I think the offense can work. But one of the problems is that the offense takes time to perfect, and we still make a lot of mistakes. Theoretically, this offense should never be stopped if you have the right guys in the right places. But that doesn’t always happen.

One early season loss was a 105-84 whipping to the Pistons. Jordan had his typical 33, 6 and 5, but the rest of the starters scored just 26 points combined. Jordan was frustrated.

WILL PERDUE (Third-year center, Phil’s and MJ’s somewhat frequent whipping-boy): Personally you would feel like, Hey, I’m working my ass off, but yet, this guy is never happy. One of the reasons he was such a different person when he came back from baseball is because he realized that no matter how hard he practiced, he was never going to be as good as he wanted to be. That changed him. His expectations, earlier in his career, were a little too unrealistic. We were in their scrapping and trying to protect him. He didn’t always appreciate that, and he didn’t always voice his frustration in the most eloquent way.

CRAIG HODGES (Reserve guard, three-point marksman, Metro Chicago native): We understood the media was gonna make it Michael and the Jordanaires. But we had just as much say as to what was going down. I had no problem saying, Hey man, pass the damn ball. There were times he’d score 50 and we’d lose and I’d say, Hey man, you’re not the only one. In January I really think things started to kick in. We started working the system, the Triangle. And MJ realized the 45 or 50 percent of the energy he was using, he didn’t have to. The system would support what he was doing. And that’s also around the time I started seeing Scottie’s confidence on the rise. He was as skilled as MJ and he was starting to understand that.

SCOTTIE PIPPEN (Bulls do-everything forward, Hall of Famer, Magic stopper): It was just me maturing physically and mentally. I had a back injury my rookie year, which kind of slowed my progress. It took me until about my third year to really be there physically and be able to handle the 82-game grind. By the championship year, I was ready physically and my confidence had grown.

Managing all these egos and tenuous relationships was Jackson, in just his second season as Bulls coach after replacing Doug Collins.

TELANDER: Phil was a completely different coach from Collins. Doug was very intense. The way he was wired was almost obsessive. He was a very good coach, but not particularly what Jordan needed. Perhaps Krause’s best decision as a GM was to make this hippy guy the coach of the team. At the time it was just astounding. Phil was almost out of the League. And he was the type of person who could never get along with a guy like Krause in regular life, but he was that last ingredient. Everybody was under this immense pressure of not wasting the greatest singular talent basketball had seen, and Phil was the last ingredient.

The Bulls would finish the regular season 61-21, earning the top seed in the East. MJ won his second MVP. Portland may have won the most games that season and both Boston and L.A. were still contenders, but only one team was on Chicago’s mind as the Playoffs opened.

SCOOP JACKSON (Chi representative, Bulls fanatic, SLAM legend): That Joe Dumars Sports Illustrated cover (the one from the previous season with a fictional depiction of Detroit’s Dumars as a giant, leaning on top of a miniature Jordan like he was a toy) was the topic of hood conversation for a while. To put him on the cover smushing MJ…we were like, “Damn! Is it really like that?” Nobody in Chicago was focused on winning the title; we were focused on beating the Pistons.