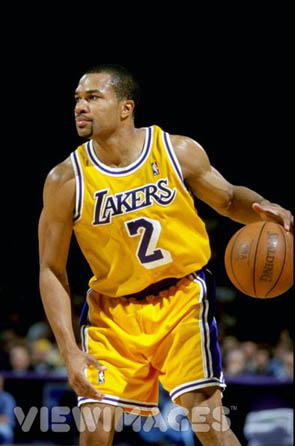 Let me say first that I fully intended my next column on this site to be a companion piece to my Air Jordan cover story in KICKS. It had been asked of me, so it was to be done. And I got started on one, even—my top five Air Jordans of all time (it had to be something like that, seeing that I didn’t do any actual interviews and thus didn’t have any spare material). But midway through writing about the Air Jordan II, I stopped. Wait a minute, I thought. I think I’ve written this stuff before. And sure enough, I had, back when I did the I-XX1 rundown leading up to the release of the XX2. So, for now at least, excess Jordan is on hold.

In the meantime, I was digging through the deepest reaches of my hard drive this weekend, and came upon a treasure trove of old SLAM stuff—pieces that never ran (some of them for good reason—there’s a short piece I wrote on J.R. Reid that may be the worst thing ever written in the English language), full-length Q&As for stories that ended up running in Hype or In Your Face, even a full prospectus for an adidas-sponsored KICKS issue. (Yes, Kobe would have been on the cover.)

Anyway, some of the files I came across were still pretty interesting to me, so I figured I’d share. This, for example, is just two Q’s and two A’s from an interview I did with Derek Fisher in the summer following his rookie year (that would be 1997). He didn’t play a tremendous amount as a rookie (and was overshadowed by fellow ’96er Kobe Bryant), but he’d played well in the Rookie Challenge at All-Star Weekend, and had definitely earned a spot in the L. I was assigned an In Your Face on him, and conducted an interview that ended up being about five times as long as the piece itself needed to be. After watching Fish play for the past 10 years, and with his return to the Lakers, I thought it would be neat to run a more complete transcript now.

Q. When did you know you’d make the NBA?
A. I guess I knew that I was gonna make it when I made a strong showing down in Phoenix at the Desert Classic. The first pre-draft camp was in Portsmouth, VA, and I played well but I got some feedback as far as people still weren’t sure whether I was a true point guard because I had to score a little more in college because of the personnel that surrounded me. You always have to adjust to what’s going on. I was in a situation, where, in order for my team to be successful I had to score, so that’s what I did. I’ll always do whatever it takes to help the team. So a lot of people weren’t sure if I was a true point guard. I wasn’t initially invited to Phoenix, and all the teams had been formed, (but) there was one team that didn’t really have a point guard, so they called me in a couple days after everybody else had been there. I missed the first few practices and practice games–I had missed all of this. The team that they put me in on had lost, like, every game. So, I come in, I want to prove that I can play, and we ended up winning all of our games until the championship game. I think a lot of people really saw how much of a positive impact I could have on the team, or on the game, playing basketball, I think, the way it’s supposed to be played. You know, pushing the ball upcourt, playing strong defense, being unselfish, getting the ball to the right people at the right time, not really worrying about scoring. The scoring’ll come when the opportunities present themselves. I’m not a guy that’ll be looked to to score a lot, unless I feel it’s necessary. But there’ll be sometimes where I’m feeling good or, well, Shaq never really struggles–averaging 25 or 30, or maybe 40, because he’s going to shoot a lot better from the free throw line this year. You know, we could look to him to score even more points. We have guys like Shaquille, Elden [Campbell], Eddie Jones, Nick [Van Exel], that can score, and Kobe can score, you know, we just had numerous amount of guys that could score last year… I wouldn’t have to score a point all year for our team to have been successful last year. I kinda let myself feel the pressure, or feel the scrutiny, as a guy not being able to score, listen to what everybody else was saying, and I started to put a little extra pressure on myself, so when I did shoot the ball I was thinking about someone who said I couldn’t shoot the ball….There are guys like Jerome Kersey, Dennis Rodman, guys that really make a commitment to becoming a role player, those are the guys that really make their team successful. That’s kinda what my role is at this point. If my role has to change for whatever reason, I can, because I have that ability…I think a lot of people appreciate the way I play this game…Like John Stockton–he does all the little things that help his team win…
Q. Was he [Stockton] one of the guys you looked up to growing up?
A. Just because he was smaller. He was always tough, and he always got the job done. Nobody ever said that John Stockton didn’t play hard and do everything he could to help his team win. I respect Hakeem Olajuwon, just for, he’s really selfless, he isn’t concerned with endorsements or his own personal achievement. Because he’s an exceptional player, he has always been a team-oriented type of guy. A real gentleman, and he seems like, a man, besides basketball. A lot of times guys in the NBA only have an identity as a basketball player, and people aren’t concerned with them as people. Hakeem really comes across as a person that plays basketball. Then, Magic…I just truly loved the way he made everyone on the court play better. I feel like I have that ability, now it’s just a matter of me waiting my turn…I’m perfectly content with the way things are, because this is only my second year…I’m not bitchin’ and moanin’ about me not playing a lot more, or stuff like that, because that takes away from what you call a team, and everybody has to make sacrifices to the team so we can reach our common goal, which is to become NBA Champions. The first step is the Pacific Division, the second step is the Western Conference, and then the NBA Championship, so in order to reach those goals, everyone has to be committed, and make sacrifices so we can reach them. I think last year, at times, we all had different agendas. Not that we played selfishly, but we didn’t make sacrifices. Sometimes, even if you’re a guy that can score, you’re going to have to make a pass to get another guy going. We all just have to take a strong look in the mirror and say, ‘this is my role, and I’m gonna do the best.’ Some guys, it’s their job to score…then you have guys that are supposed to be leaders and get the ball to the scorers…Everybody can’t score 20 points a game, so don’t worry about it.