The Gasol Trade: Why This Is Awesome 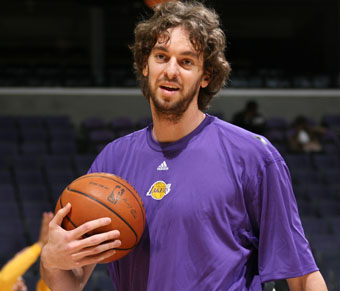 I was in downtown Toronto, doing a bit of shopping with wifey when news of the trade broke. Driving down Bay St, when the reality of what had just transpired hit me, I very nearly veered into oncoming traffic.

My cell phone started blowing up with hysterical messages from friends, some ecstatic with what this meant for the Lakers, others (Laker haters) bitterly claiming that a softie like Gasol didn’t guarantee a damn thing.

An improbable trade in the middle of an increasingly improbable season.

Overnight, my beloved Lakers have transformed themselves into legitimate title contenders, and below are some of the reasons why.

1)How about Jerry West pulling a Kevin McHale on the Grizzlies? Remember how McHale basically gave away KG to the Celtics to save his good buddy Danny Ainge’s behind? That, essentially, is what happened here. Once a Laker, always a Laker.

(Jerry West, being the shrewd businessman that he is, has also set up the Grizzlies nicely for the future by securing two future first-round picks from the Lakers. L.A. was willing to mortgage its future for a chance to win now – with Kobe still at the apex of his powers – and Jerry was the right man to help them along. Thanks, Mr. Logo.)

2)Pau Gasol needed this as much as the Lakers did. He’s basically pissed away the last five years of his life in the wasteland known as Memphis, and suddenly, he’s now playing on for the League’s most popular franchise, alongside its most compelling figure. It wouldn’t surprise me in the least to find out that he woke up the day after the trade and pinched himself to make sure he didn’t dream the whole thing.

(Pau Gasol was also made for a town like Los Angeles. When watching him toil away in Memphis, one couldn’t help but get the feeling that he deserved a much bigger stage. He’s on the biggest stage imaginable now, and I believe he’s going to flourish. The Triangle Offense thrives on passing, and guess what one of Pau’s biggest assets is? Not only that, but he’s got another low post presence returning to the lineup in about a month to make up for his shortcomings on defense and boards.

(Also: Gasol’s slightly “out there” personality should add tremendously to the Lakers’ hilariously eccentric locker room.)

3)This is now the Purple & Gold frontline: Andrew Bynum, Lamar Odom, Pau Gasol. Lawdy Lawd. I’ll take my chances with those three against anyone in the League, everyday of the week and twice on Sunday. Those angst-ridden nights of guaranteed losses to stacked squads like San Antonio and Phoenix that we Laker fans had grown accustomed to over the last three seasons are over.

4)Every Laker fan worth his/her salt owes Mitch Kupchak a heartfelt apology. Three years of nothing but seething hatred from an entire fanbase, and Christ, it turns out that the bastard knew what he was doing all along.

(This past summer, when Kobe morphed into Denzel’s frantic wife from “John Q”, essentially yelling “Do something!!!” into the abyss, Mitch showed tremendous courage by refusing to panic and stubbornly stuck to his beliefs. He didn’t grab a gun and hold up an entire hospital; instead he kept faith in the roster he had painstakingly assembled and waited for them to prove him right. And shockingly, they did.

Kupchak knew full well that if Andrew Bynum didn’t turn into the monster that he has become, he was in danger of forever sullying his professional legacy by being the guy who stood by helplessly and watched Shaq and Kobe leave within the same decade. Today, he has to be considered one of the smartest front-office execs in all of sports. Simply remarkable.)

5)Seriously, who wants to face these guys in the Playoffs now? They were already scary without Gasol, and now, teams must decide if they’re going to let the Lakers’ frontline do them in, or if they’ll take their chances with a single-covered Kobe. In other words, “Gulp”.

6)The Western Conference is now even more insanely difficult than it was before. In the Wild West, only five teams are below .500 (with the Kings right around the mark), and at this point, it’s impossible to predict who’ll come out in June. I’ll be shocked if at least three of the Playoff series don’t go the distance this summer.

7)The NBA’s two marquee franchises, LA and Boston, are poised for a serious run at the title. If you can think up a more potentially entertaining Finals series than this one, I’d love to hear about it.

(It’s almost as if David Stern woke up one day this past summer, and said to himself, “You know, I kind of miss when the Lakers and Celtics were relevant. Let’s see if I can do something to make it so again … Now, where did I put McHale and West’s numbers?”)

8)This trade all but guarantees that Kobe Bryant will finish his career in a Laker uniform. All Bryant has ever asked for – in the most dramatic way possible, of course – is a fighter’s chance. Do you think there’s any chance in hell he’ll bolt town after next season with two dominant frontcourt players, arguably the best coach in the League, and support up the wazoo? No way.

(Ever since Shaq got traded, by the sheer force of his will, Bryant has dragged the team into the Playoffs, only to bow out unceremoniously. Now, the front office has brought in a fellow All-Star, nurtured a young center with limitless potential, and sprinkled in the requisite veteran leadership. Best of all, they’ve done it without giving up too many assets.)

Management has done its job. Now, it’s the players’ turn.

Time to go out and win a title.