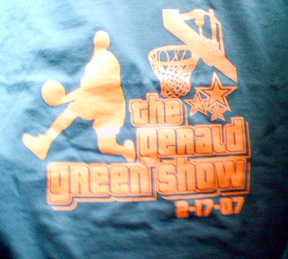 1) Just got an email that Jason Kidd has a “strained back” and will miss the next two Nets games. There’s no word about his availability for the All-Star Game, but if he’s missing two real games you figure he wouldn’t push it to play in Vegas. (Also, if I was him, with all he’s been through of late, I wouldn’t be so excited about having to face the assembled ravenous media for an hour.)

The bigger question is, Does this open a roster spot for Joe Johnson? Will The David Stern Robot right the most egregious wrong of the All-Star selection process?

2) Reebok is already getting the hype started for Gerald Green’s trip to the dunk contest. Came to work this morning and found a huge box on my desk with “THE GERALD GREEN SHOW” on the side. In the box was the t-shirt pictured, a poster, a folder with press releases and other assorted flotsam. I like the idea behind the whole thing — a player being actively promoted a week before the dunk contest.

Says here Gerald Green wins it all. What do you guys think?