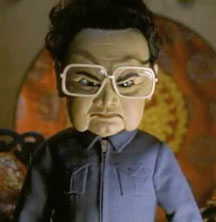 This is truly amazing news. Eccentric North Korean dictator Kim Jong Il is a huge NBA fan. I can’t begin to tell you how excited I am by this development. Apparently this is not a new story and it’s a well-known fact that the craziest most dangerous man alive is a big NBA fan. But it’s new to me, and I wish I had known. Sure, he’s a terrible person and he won’t let the people of his country have cell phones or the same satellite TV that brings him those NBA games. And he might be the eventual cause of armageddon. But he’s a big NBA fan! SignonSanDiego.com has the article that describes KJI’s superfandom, and oh yeah, he’s for real.
Excerpts:

He also is an avid basketball fan, experts on North Korea say, so much so that he is said to have regulation courts at most of his palaces plus a video library of practically every game Michael Jordan ever played for the Bulls.

While the rest of the world frets over what Kim might do with his nukes, Kim is sitting in his den, watching pirated satellite television signals from the United States and wondering if Shaquille O’Neal’s new shooting technique will improve his woeful free-throw percentage, or if Phil Jackson can get it going again with the Lakers. The NBA season, after all, opens Tuesday night in Miami and Los Angeles.

Dear Leader, Mr. Jong Il, sir, you great leader of men, you powerful visionary, you sick f–k! We need to get you in SLAM for a Dimedrop. This is the most exciting thing to hit the NBA all summer. And right on opening night! Oh, Stephen Jackson’s got some guns and Bassy may or may not have had a rapper shot. That’s cute. But there is a hardcore NBA Fan with his finger on the trigger of NUKES. Well, maybe he does. He could be bluffing. If Gilbert Arenas and Ron Artest were molded together to form one eccentric dictator, they would become this guy. Kim Jong Il is worse than T.O. Yeah I said it! Take that, sports media!

A few weeks ago I read somewhere that Kim Jong Il spends $600,000 a year on Hennessy. Now, I assume that rappers love Henny so much because Tupac drank it and it rhymes with penitentary. I used to drink it, but I don’t any more cause there’s something in there that would give me a headache more than your average hangover the next day. Plus, it’s real sugary to the point that it’s almost like a girl’s drink. I really think that people order Henny or a Hen and coke or whatever cause they are too lazy to come up with a drink of their own and just rely on what rappers tell them to drink. Annnnnyways… the fact that this guy spends $600 grand on Hennessy means you have to respect him. I mean, as much as you can any insane dictator that could possibly end the planet as we know it.

So, Dear Leader, get back to me. You can email me here. I await your correspondence. We can talk basketball or crush our enemies and rule this planet together.