The Gully State Warriors and a Sunday of fun 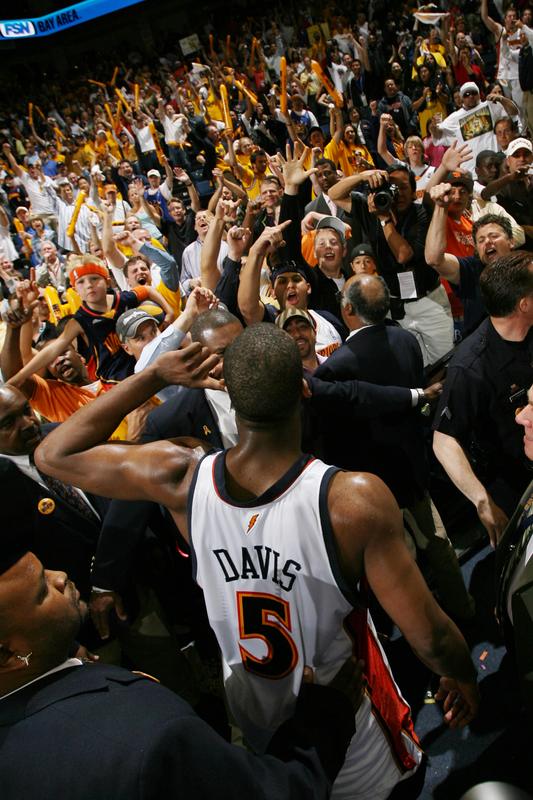 I love these Golden State Warriors. It just seemed like too preposterous of a limb to stand out on to even think about a 67 win team going down in flames against them.

Basketball-wise, they are sort of like the Illinois team with Deron Williams and Dee Brown that lost in the Final to North Carolina. They just keep shooting three after three after three. Last night they took so many bad ones, and it looked like the game was over. Somehow they had the heart to not cave, and win the game. But that’s just the basketball part. This is a team that is exactly what the NBA needs. You always hear about how people are turned off by the criminals on parole and all of the preening and posturing that is disgracing the game that James A. Naismith brought to the masses down from Mount Sinai. Well, the Warriors have a key player who started this season as the Pre-Pacman Jones poster child for athletes gone wild. Stephen Jackson shot his gun in the air after he was hit by a car, now he’s locking up Dirk Nowitzki. Monta Ellis is the shoot-first 140 pound undersized PG that is supposedly destroying the NBA game (by the way, Monta and Al Harrington combined for ONE point last night, and G.S. still won). Baron Davis is supposed to be this primadonna who jacks up threes and doesn’t care about his teammates. J-Rich is a dunker and occasional shooter. It goes on and on, how these guys are everything that makes older fans hate the NBA.

I hold off using the word “gully” until it’s absolutely necessary. That is what this team is. You simply cannot be the bad guys when you have 25 fewer wins than the Finals destined juggernaut you are facing. The Warriors with all of their flaws, have been the most entertaining team in the playoffs. Meanwhile the Mavs, who were a study in basketball efficiency and cold-hearted execution, showing all the traits of the villain team in a cheesy sports movie, are ready to crumble and complete the meltdown.

Dirk. Dirk, Dirk, Dirk. Do you realize that a player named MVP of a season has never gone out in the first round of that year? I looked it up going back to 1980 when the NBA was invented. Get it together man! Don’t go out like this.

Baron Davis made a play at the end of the third where he stole an inbounds pass by out-jumping Jason Terry, took it coast to coast fighting off Terry, then he finished it with a dunk to tie the game and take the crowd to new levels of bananasness. That was a basketball play you can make only if you are a freakishly gifted athlete. You might remember Player of the D.A.Y., which in the early going was the sole possession of one Baron Davis. The Warriors were having a nice turnaround season, but then the annual Baron injuries set them back. It looked like the Clippers were going to steal their playoff birthright. The blessing in disguise of the season was the injury to Chris Paul, which kept the Hornets out of playoff contention just long enough for Golden State to make it in. Many of us were begging for them to play Dallas, not expecting them to win, but just for the heightened drama of Nellie vs. his ex-team.

The Warriors are really too good to be true. Dallas can still win the series, but it won’t be easy, and they will be worn down for the rest of the playoffs. Jerry Stackhouse and Jason Terry seemed like they wanted to win that game. Don’t know about the rest of them.

The Heat did not defend their crown so well. After game 2, I alluded to the old “Heart of a Champion” speech. No dice. I remember back when Rudy T popularized the phrase, it was the corniest thing ever. As they tried to defend their back-to-back clutch city titles, the Rockets fell behind 3 games to none to the Sonics in the second round. In game 4, they were losing in the fourth quarter, but made one of their trademark rallies to tie it and send it to OT. Eventually Gary Payton won the game for Seattle and the sweep was completed. But it was the last stand for those Rockets and the heart thing stuck with me.

But that did not happen with the Heat. Stan Van Jeremy built them up with their initial playoff run that got Lamar Odom and Caron Butler’s value to the point where they could be traded for Shaq. They got to the conference Finals, won the Finals, and now they couldn’t overcome Dwyane Wade’s injury. The future is not that bright. Who knows what they will look like? Oh well, not our problem today. At least they got their ring.

The East is sweepsville, USA. Three of the series were swept if you count Cleveland over Washington tonight, and you should.

Me and Jake were out at the Nets-Raptors game last night, and Vincent will have his coverage of the game. I picked Jake up on Canal St. in Manhattan, right in front of one of Omar’s 10,000 bootleg CD spots, and we got there a little bit late thanks to the natural disaster that is the Holland Tunnel.

The Nets fans were surprisingly frisky for their reputation. A full house in Jersey on a Sunday night? unexpected. Drunk and unruly fans getting sloppy in the parking lot? That IS Jersey. Jake and I had a good time, though the place was so packed we couldn’t even get into the media parking lot. We had to leave my car with the animal civilians, and that led to an awkward moment after the game with some belligerent Raptors fans that were throwing cones around and doing weird things to their convertible.

Since the game was so out of hand, I’ll tell you something that you needed to see in person to feel. Bruce Willis was there with his girlfriend. On a scale of 1 to 10, she was a 128,000. Die Hard indeed.

Finally, Lakers-Suns. My favorite thing about the Suns is the quick inbounds pass. It’s got to be the most frustrating thing in the world for an NBA player on the other side. For example, Kobe Bryant has just done a double spin move, blown by three defenders and thrown a miracle off the glass. It’s human nature to want to celebrate that, or at the very least backpedal on defense, maybe wink at a nice young lady in the crowd, and wait for the camera to pick you out so the announcers can praise you. By the time that happens, the ball is already behind you and the Suns have made three passes. You really have to be alert every second of the game. The only way to beat Phoenix is to slow the game down with free throws. That or your PG has to have such an insane game against Nash that he can’t compensate for his lack of D with dominant quarterbacking of the offense. He had 20 assists through three quarters. That’s not possible, yet it happened. Amare had 19 boards through 3, also something that should never happen.

Alright, the much more thorough recaps are on their way in. The Playoffs are much more fun to watch than the regular season.