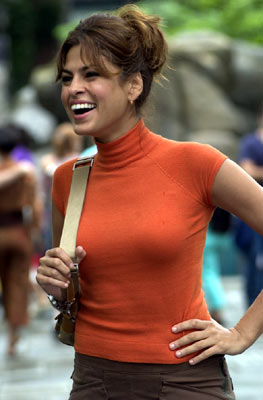 Sam wrote today about how much he enjoyed the movie Click (at least in comparison to the Knicks/Bulls game).

Late last night, with no late-night games on League Pass, I found myself tuned to the movie Hitch on Starz HD. And I found it strangely enjoyable. Mostly because of Eva Mendes…in HD…’nuff said.

There’s a scene in Hitch where they go to a Knicks/Grizzlies game, and this reminded me that I was at that game and shared an elevator ride that evening with Ms. Mendes. As I wrote back then in The Links…

Russ, Khalid and I went to the Knicks/Grizzlies game last night at the Garden. Things started off really well. As we walked in past the security desk, we were greeted with signs informing us that a movie called Last First Kiss was being filmed during the game, and that by entering the game we were giving the movie makers permission to use our images in the film. We asked a Knicks PR staffer who was in the movie, and the first name he responded with was Eva Mendes.

So we’re standing there waiting on the frieght elevator, and suddenly Ms. Mendes herself came strolling up, along with a stylist and a few other attendants. She was wearing her costume for the movie: a skirt, jacket and high heels. We all squeezed in the elevator together and she was on the opposite side from Russ, Khalid and me — I’m sure that was just a random coincidence on her part that she ended up way over there. I also think I stared at her the entire time.

She got off on the fifth floor, and we didn’t say a word until after we departed on the sixth floor, out of reverence, I think. Moments later, in the Grizzlies locker room, we were trying to explain who she was to two of the ballboys, but couldn’t remember the name of the movie she was in with Denzel Washington. From across the room, someone said, “Out of Time.” We looked up and found Grizzlies guard Earl Watson hanging on every word of our story.

The other fun thing was Hubie Brown’s pregame press conference, which was really more like a lecture or a filibuster than a press conference. He began by taking a question, then talked for about 15 minutes straight. I got there a few minutes after it started and sidled up in the rear of the media pack beside Marv Albert. This ensued:

ME: Hey, Marv. How are you?
MARV: LANG! I’m doing…fine. This is amazing. He’s been talking for…ever.
ME: It’s like he’s teaching a class, right?
MARV: YES!

• You want another funny elevator story? The other day Sam and I were heading out to lunch and we got in the elevator with a woman we didn’t know. This happens often when you work in a huge building. Sam was telling me about something or other as this woman was rummaging around in her purse.

Suddenly, something fell from her purse and landed smack in the middle of the elevator floor. We all looked down and discovered a tampon. I looked at Sam with my eyes wide open, as if to say, Keep talking! Sam started stammering and stuttering.

The woman bent over and picked up her sanitary napkin and said, “Oh man, that was really embarrassing. Did you see that?”

And before I could play it off, Sam blurted out “NO!” in a way that could only mean yes.

• The Heat were without a few of their big dogs last night and they fell to the BETcats. After the game, James Posey said, “Right now, our chemistry is not good.”

Hey, I can’t sit standing on the sideline, Udonis.

• When things go bad in Seattle, they really go bad. Last night Chris Wilcox sliced his face open after he shut his locker on his own head. First time he’s had his head in the game all season. (Ba-dum, ching!)

Also, I emailed Nick Collison for an explanation on his recent throwdown with Yao. No response at press time.

• Bonzi is officially dunzo for the season. No surprise there. He went from having a killer Playoff series last year and making himself one of the big targets in free agency last summer to text-messaging himself out of spot on Houston’s playoff roster this year. Pretty remarkable work.

• Adam Morrison was fined for flipping off a fan who was heckling him in Miami. The funniest part is that Morrison wasn’t even playing in the game. In reality, that is. Who knows what was going on in Morrison’s mind.

• Either Peter Vecsey’s story in yesterday’s Post was full of wrong information, or a bunch of people down in Atlanta are lying.

• And finally, Chad Johnson loves the beautiful game. Love how he’s throwing out names like Drogba and Henry.