The Hell with Texas—Now THIS is a Series 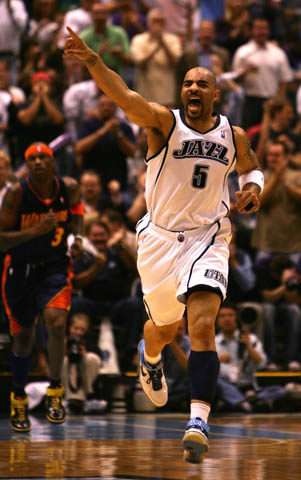 Utah plays in the “EnergySolutions Arena”? When did this happen?

Jerry Sloan and Don Nelson have more NBA coaching experience between them than every other coach in the NBA combined. (I just made that up, but it sounds believable, right?)

This game is absolutely insane in the first quarter. In. Sane. Whatever the Warriors have is obviously contagious, because there’s really no other way to explain the Jazz scoring 37 points in the first.

Derek Fisher is unavailable due to family issues. Doubly weird since he was a Warrior last year. So Dee Brown actually gets some burn after playing all of three minutes in the first round.

I still don’t quite get why it’s a foul if you graze a shooter’s hand after the release. Shouldn’t there be some sort of common sense used there? I understand that you don’t want defenders to be given free rein to tackle a shooter as soon as the ball is released, but incidental contact? Let it go. Please?

Who’s the Warrior that Charles Barkley dunks on in that T-Mobile commercial? (You know, the good one.) All I can tell is that he’s number 21 and it must be some time in the mid to late ‘80s. For whatever reason I don’t have a Warriors media guide here, and it’s driving me insane.

Reggie Miller: “Most of these players on the Jazz are used to playing streetball.” Um, yeah.

OK, the Jazz are a LOT better than I thought they were. They could grind it out with the Rockets and—for a half, at least—they can run with the Warriors. Color me impressed.

AND STILL: The Jazz trail at the half for the first time in the playoffs.

Matt Barnes. Not good enough to stick with the Knicks (he played six games for them in ’05-06), but good enough to be a key component of the Warriors. And I won’t even get into the fact that the Knicks once fired Don Nelson. Although I suppose I just did.

Andris Biedrins. Does he put that stuff in his hair EVERY DAY? He needs to hit up some clubs with Kirilenko.

Gordan Giricek appears to be drinking Orangina on the sideline. Or an Orange Julius.

The Golden State Warriors are pretty much a perpetual scoring machine. I’m still startled that the Jazz can keep up—although they have a lot of three-point shooters as well. And even their bigs can run the floor.

It’s nice that TNT let Dick Stockton announce the game involving the team that his great-great-great-grandson used to lead.

Does Carlos Boozer have to re-shave his head between quarters? He should donate an eyebrow to Jeff Van Gundy for re-seeding purposes.

Golden State is over 100 with six and a half to go, and the Jazz are just a minute (and two points) behind. Pedal to the metal.

The Jazz took a tremendous punch from the Warriors and survived. Deron Williams and Baron Davis both had fantastic games, but it was Carlos Boozer who made the difference in the end, with 17 points and 20 rebounds.

And speaking of pedal to the metal: