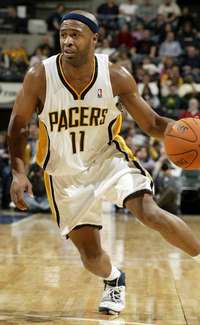 Oh boy. The Portland Trailblazers players stopped getting into trouble, so we can’t call them the Jailblazers anymore. Thankfully the new team of mischief has a similar name. The Indiana Jailpacers! The latest episode of the team that had a player shooting his gun in the air after getting hit by a car, can now add another fun night to their list of accomplishments.

Before I go any further, I’ll take this time to say yes these kind of things are reported more in the NBA than other sports and a bigger deal is made and race plays a factor and all of that. All that being said, this did happen. Allegedly.

The two facts that make this story even funnier/sadder.

1. Jamaal Tinsley and Marquis Daniels are among those alleged participants.

2. It happened after the game against Golden State. The very same team they traded Stephen Jackson to.

You really can’t make this stuff up. Unless you believe Jamaal Tinsely, who claims “I’m upset that I could be involved in something like this. I had nothing to do with it.” Hmmmmm… it’s possible this is all made up and these guys are targets for this kind of thing. But then again, you’ve got veteran leader Darrell Armstrong weighing in “Any time we go out, things can pop off at any moment. As players, we have to be a little more smarter, not only my teammates, myself included. You are in spots that can cause some drama. You never know what might happen. Every time we go somewhere, we try to go out and have a good time, and things happen.”

Without getting too judgmental, let me just say that if any of the Pacers are around when we’re out in Vegas, I’ll be ready. I don’t know what for. I’ll just be ready for whatever.