The Kandi Man flies to Phoenix 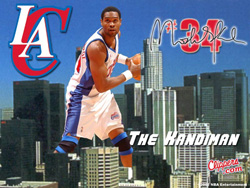 Michael Olowokandi came into the league as the first overall pick of the 1998 NBA Draft. In his last two years with the Clips, he put up decent enough numbers to fool the T-Wolves into giving him a contract. POP QUIZ: What team did he finish last season with? Answer: The Celtics. How about that.

When you talk about the all-time NBA draft day busts, he’s right at the top of the list. Check out who was picked after him, and I don’t mean throughout the course of that draft, I mean in order right behind him: Bibby, LaFrentz, Jamison (traded for Vince), Vince (traded for Jamison), Tractor Traylor (traded for Dirk), E Boy, Larry Hughes, Dirk (traded for Tractor), Paul Pierce, and Bonzi. Every single one of those players with the exception of Traylor and arguably LaFrentz, is helping an NBA team right now, 8 years after they were drafted. Bonzi will eventually, and there were some sleepers in that draft like Al Harrington, Matt Harpring, Ricky Davis, and Nazr Mohammed. There were some good players taken after Kwame in the 2001 draft, but I’m comfortable with calling The Kandi Man the biggest bust of any #1 overall pick in NBA history.

Now you can just give him that comeback player of the year award. He’s going to Phoenix, where Tim Thomas became a playoff hero. Steve Nash and Mike D’Antoni, do your thing. Michael had to pay his own way to get to the tryout, but whatever. He’s got more than enough money to fly. Hoopsaddict has a nice link to the story which includes a video of Olowokandi’s greatest NBA moment, which happened in a game against these very same Suns. It wasn’t such a great moment for the Kandi Man himself, so much as it was Amare being Amare, but it’s still a must watch video clip. Strangely, if Kandi were to make the team, he would do so as an insurance policy for the manchild, who has a comeback player of the year campaign of his own in the works.

So, once Olowokandi makes the team, what are we looking at here? 15 and 8 every night? More than that? The Suns have proven they can rehab anyone’s game.