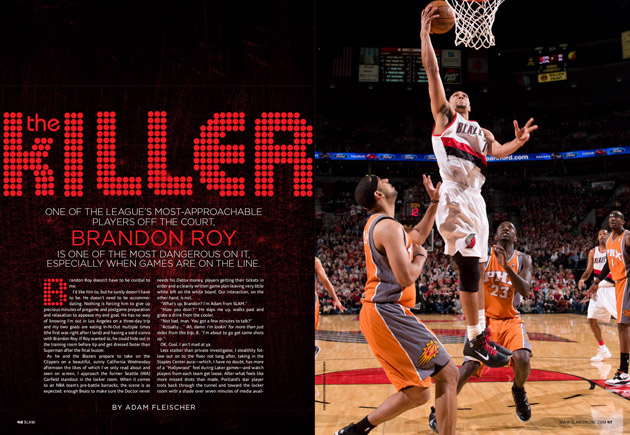 Brandon Roy doesn’t have to be cordial to me.

I’d like him to, but he surely doesn’t have to be. He doesn’t need to be accommodating. Nothing is forcing him to give up precious minutes of pregame and postgame preparation and relaxation to appease my end goal. He has no way of knowing I’m out in Los Angeles on a three-day trip and my two goals are eating In-N-Out multiple times (the first was right after I land) and having a solid convo with Brandon Roy. If Roy wanted to, he could hide out in the training room before tip and get dressed faster than Superman after the final buzzer.

As he and the Blazers prepare to take on the Clippers on a beautiful, sunny California Wednesday afternoon the likes of which I’ve only read about and seen on screen, I approach the former Seattle (WA) Garfield standout in the locker room. When it comes to an NBA team’s pre-battle barracks, the scene is as expected: enough Beats to make sure the Doctor never needs his Detox money, players getting their tickets in order and a cleanly written game plan leaving very little white left on the white board. Our interaction, on the other hand, is not.

“How you doin’?” He daps me up, walks past and grabs a drink from the cooler.

“Actually…” Ah, damn. I’m lookin’ for more than just miles from this trip, B. “I’m about to go get some shots up.”

Less stalker than private investigator, I stealthily follow out on to the floor not long after, taking in the Staples Center aura—which, I have no doubt, has more of a “Hollywood” feel during Laker games—and watch players from each team get loose. After what feels like more missed shots than made, Portland’s star player trots back through the tunnel and toward the locker room with a shade over seven minutes of media availability time remaining. As he turns the corner, it looks like he catches me trailing, eyeing, some 30 paces behind.

It’s well worth it, though. After talking to reporters for a few minutes before the locker room closes, Roy seems to notice I haven’t gotten as many questions in (two) as I would have liked to during the scrum. I begin to turn to head through the double doors and toward my media room dinner.

“Hey,” he grabs my attention, although it takes a perplexed head turn or two for me to realize that I, instead of he, have become the target. “I got you postgame.”

Word? It’s like that? Respect. I guess that’s the ’09 Magic Johnson Award (given annually since ’01 “to an NBA player who combines excellence on the court with outstanding cooperation with the media”) winner, in full effect.

The locker room may have felt like I was in Every Arena, but I surely wasn’t dealing with an Everyman. This began to reveal that. Brandon Roy is a different sorta dude.

The clairvoyance he shows in understanding my intent mirrors the sort he displays on the court every night. It’s the skill that makes him one of the best-equipped at finding teammates or getting his own shot, depending on the situation, in the entire League. It’s what helped him lead a team that lost players to injury all season—including 17 for Riggity himself—to the sixth seed in an absurdly tight Western Conference. It’s what helped him keep his team on the winning track when their front office looked like a broken home.

“BRoy is a great, great talent. I think if he was in a bigger market and in a bigger city, you’d start hearing more about him,” says Marcus Camby on the night of his first return to Clipperland since joining the Blazers mid-season. “He’s one of the better young players we have in this League, and he makes everyone’s job easier.”

“The biggest thing is try and make a play,” says Roy, in a West Coast twang slightly less thick than E-40’s, of his in-game mindset. “Anytime I have the ball, I’m not thinking, I gotta score; I’m thinking, I gotta make a play. That could be make a play to get to the basket and I finish myself, or double team and pass it.

“Growing up, I always played combo; I played some point, I played the 1, I played the 2,” he continues. “So, for me, late in games, I don’t feel like I just gotta get a shot. I feel like I gotta create offense.” Then, as if to respond to a criticism that no one around has even leveled, he adds: “It works for me. It works for our team.”

But do you want your team’s star not locked in to taking the winning shot? Not being proactive enough to say, OK, this is my team, this is my game to win? Kobe takes that shot every time. LeBron may take it, or he may find a teammate—and hear the criticisms when that small fry’s open jumper rattles out.

“[Brandon] and I were talking over All-Star break, and I told him I don’t know of any player outside of myself that has no weaknesses besides him,” Kobe said in March. Take a second and think about what that means. That’s coming from the lips of the game’s most versatile offensive talent.

Kobe continued: “If you think about it, he can go left and pull up and shoot. He can go right and pull up and shoot. He can fade left shoulder, he can fade right shoulder. He can shoot the long ball. He can finish at the rim. He can shoot free throws. He has no weaknesses in his offensive game; so if [going from playmaker to scorer is] something he wants to do, he can easily do it.”

And sure, just like KB, BRoy wants to win and do what it takes to make that happen for his team. But Kobe’s words would suggest that he thinks that BRoy shooting gives the Trail Blazers the best chance. And it usually does. Brandon, for better or worse, isn’t set in that mind state. Yet. Or maybe ever. Like he said, he’s gotta make a play.
Although they were said some weeks ago, I have to bring these comments up as he’s minutes away from playing in Kobe’s house, even if it’s not against the man. “It’s an honor for me to have Kobe even speak about me.”

Bullshit. Even with the open mindedness that allows him to find a teammate or get his, and even with criticisms that he, at times, should grab more of the late game onus, BRoy is still an assassin. He has a late game license to kill that makes James Bond’s instinct seem infantile.

Since leaving the Washington Huskies after four years and entering the League in ’06, Brandon has made 37 plays in the final 35 seconds that either won a game or sent one into overtime. If you wanna break it down, that’s a little more than one out of every eight regular season games he’s played in. That just ain’t right.

The 37 looks especially dope as the numerator on that fraction because the denominator has taken a hit every year, as he’s missed a total of 54 games in four seasons. Such as the case, his durability sometimes comes into question. He faced injuries at U-Dub, too. Having never played a full NBA season—although coming within single digit games twice—it’s not ridiculous to bring that durability into question. But the man would give his right leg to be out there, giving his all for Rip City, and there’s no questioning that.

Like, say, for instance, in this year’s Playoffs? When he returned to play just eight days after knee surgery to repair his right meniscus so he could help his squad square off with the Suns. Forget the injury bug. The Blazers were dealing with the bite of a rabies-infected wolf. BRoy wasn’t supposed to get hurt in the third to last game of the season, just four days after putting 23, 6 and 3 on the Clips, not far from his career 20, 5 and 4.6. Things were coming together.

If this Portland team can ever manage to stay healthy—that definitely includes Brandon—some special things can happen. Nah, know what? They will happen. They could have happened this year. Which is probably why Roy wanted to be out there in the Playoffs, even though not much could truly have been salvaged at that point. Still, as the leader of the team, he wanted to be out there.

Everything that I had been experiencing made Roy seem like a down to earth dude. A laid-back Seattle cat whose apparent nonchalance on the court and demeanor off it were merely reflective of the coast he’s from, masking constant intensity. That’s why I was a little surprised when I looked at an old SLAM story from his high school days that suggested the young kid from the 206 was maybe cocky—or at least supremely confident. I tell him this, to ask him if he’s evolved.

“That I was cocky?” he retorts, shocked to the extent that even though we both know we’re talking about him, he had to ask, and stress the object of the sentence.

“I don’t think so,” the pitch of his voice goes up, as if he were asking a question. “I thought I’ve always been the same. Do you think I’m cocky now?”

Huh? This dude—the former Rookie of the Year, the three-time All-Star, the two-time All-NBA teamer—is genuinely curious if I think he’s cocky? “Nah, doesn’t seem like it. That’s why I’m asking.”

“I don’t think so. I think I’ve always been the same. I’m down to earth, I just work hard…” he cuts himself off, still buggin’ from my initial question, and exhales just a bit. “Nah, I never thought I was cocky. I’m blessed for everything that’s happened.”