The Knicks Are Emotional 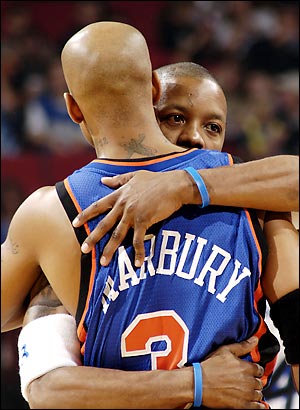 A couple of days ago, we found out that Jamal Crawford will likely miss the rest of the year due to a fractured right ankle. It should come as no surprise that Knicks fans did not take this well. Crawford was arguably the best player on the squad this year, hitting big shot after big shot, and their most reliable fourth quarter scorer.

What should come as a surprise was the reaction by teammate Stephon Marbury to the news. Dude started shedding tears:

When Jamal Crawford informed Stephon Marbury on Tuesday morning Crawford was out for the season, the Knicks point guard thought the combo guard was joking. When Marbury realized Crawford was serious, Marbury broke down and cried for more than a minute, according to a team source.

I’m pretty sure Lang’s dog (Starbury) had a similar reaction.

“It hit me hard because of everything that’s going on, as far as making the playoffs and just for him, because of how much he’s grown since he’s been here,” Marbury added. “It’s been an uphill battle for him and finally he got to this point and has an understanding of what he can do on the basketball court. It’s tough to see a young player go through that.”

You gotta hand it to Isiah Thomas, these guys have become a real team. They might not make the playoffs, but you cannot deny that they have made significant progress from last year’s trainwreck of a season. I can’t even imagine how thrilled Larry Brown must be to see this taking place.