The Lakers and Mavs Don’t Like Each Other at All 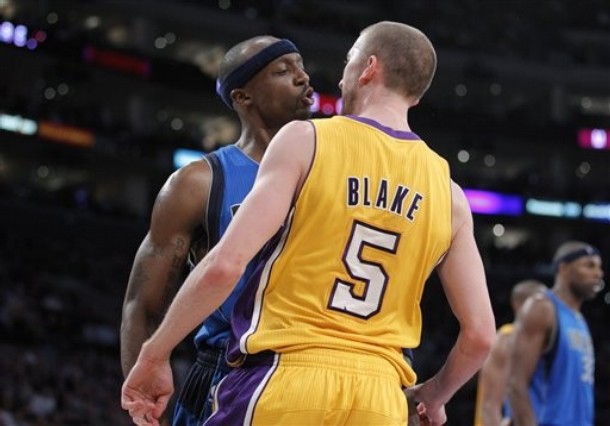 Things got more than a little testy at Staples Center last night, with five players (and several fans) getting tossed out, and somehow, Ron Artest wasn’t involved in any of the pushing and shoving.

Artest was too busy flexing and kissing his biceps.

Despite Ron-Ron’s absense from the beefing, plenty of players let emotions run high, as things got even wilder in the stands.

The hostility between the two teams had been simmering well before the game started.

From the Daily News:

The ongoing verbal sparring between Dallas Mavericks owner Mark Cuban and the Lakers continued this week, with Cuban joking that he would like to see Ron Artest playing in the post during the game between the teams Thursday at Staples Center. “Anything that puts the ball in Ron Artest’s hands is always a good thing,” Cuban said. “And you can tell him that I’ll even take him out for ice cream. Of all the choices you have on that team, you want Ron Artest making decisions in the triangle.”

Lakers coach Phil Jackson, who likes to crack back at Cuban just as frequently and sarcastically, took another jab at his target when asked about Cuban’s comments. Jackson said Cuban likes to “prick the skin of people, but he’s not a player. He just sits behind the bench with his sun-tanned face and makes comments like that,” Jackson continued. “He’s got nothing to do with it. I know he’s provided a great roster and it’s almost as good as money can buy, but not quite.”

As for the game, the Lakers quite simply punked Dallas in their most meaningful matchup of the season, sending an unmistakable message with a possible second-round Playoff meeting on the horizon.

Kobe Bryant didn’t mind seeing three of his teammates get ejected; in fact, he felt this was a good thing for his surging squad: “It brings us closer together,” Bryant said. “It’s as simple as that. We can’t go for that, man.”