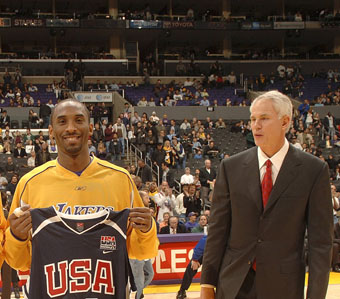 When you watch a ton of basketball — specifically of the pro variety — you learn how to catch the true import of wins and losses. A win is not always a win and a loss is not always a loss. You gotta weigh and contextualize these things. The Lakers X-Mas Day win was a win. Sometimes a squad gets hot and lucky and another squad goes cold and lethargic and you can get a scrub-squad knocking off a big-boy. In fact, it happens often in an 82-game season. But sometimes a team arrives, takes that step and shows that a playing field has leveled. LA only beat Phoenix by seven points (122-115), but it was a convincing victory. They controlled the whole game. This is significant because, as of October 31, 2007 — and probably some weeks afterward — this was unexpected. There were many experts that picked the Lakers to finish in the Lottery. And who can blame them, seeing as how Kobe’s tenure with the team was tenuous, to say the least. Now, Bill Walton is most definitely a man who eats hyperbole and exaggeration for brunch, (I once heard him say that “Danny Ainge was the best shooting guard of the modern era of basketball. And it’s not close either. His talent, legendary. His feats, Olympian.”), but notice how Michael Wilbon didn’t offer much resistance when Walton called the Lakers the SECOND BEST team in the mighty Western Conference. Nobody expected this.

This all made one moment during the game incredibly entertaining to me. At one point, during a Laker run, the ABC camera man flashed a shot of Lakers GM Mitch Kupchak in his suite. Kupchak’s expression was, as always, goofy. But that’s when I thought to myself, “This dude was never as dumb as he looks, was he? He was crazy like a fox.” He was looking down on a team he built with an ‘I told you so’ aura. Not long afterward, postgame Kobe was saying a lot of the right things. This, after a summer of saying a lot of the wrong things. Sheer distaste and appall for the caliber of his teammates had morphed into growing optimism and respect. He spent months saying he wanted out. But how serious was he? His motives, I am sure, were ulterior.

I’m convinced that Kobe Bryant and Mitch Kupchak are smarter than all of us combined, that they are as much hustlers as they are gamblers.

From May through November, Kobe Bryant and Mitch Kupchak were among the most maligned figures in their sport. Hit a barbershop or sports bar and I’m sure Kobe was a waffling, high maintenance star that abandoned his team in the worse way when he went on his campaign of publicly ridiculing and condemning players and management. Read a column or hear one of the shouters on the radio and I’m sure Kupchak was a fool, the rube behind a failed Jason Kidd trade and the architect of a team Kobe didn’t want to play for/with. The most popular franchise in the NBA had spiraled to a tumultuous depth and those two men were ultimately the face of the malaise.

It turns out though, that both men were both knowingly and latently smart, wise, keen and a few other laudatory adjectives you want to throw out, as long as they mean something similar to prescient.

As much as Kupchak is lambasted by fans/media/peers/Kobe, he has quietly done, perhaps, the best job of rebuilding/replenishing a franchise — without dropping to cellar-dweller status — than any current franchise other than San Antonio and Detroit. Kupchak was the GM that traded Shaq. We know this. But since then, the Lakers have missed the Playoffs just once, he lured Phil Jackson back to the bench and steered a string of draft night performances that have placed the Lakers in the position they’re in now, which is one surprisingly close to contender-status. Kupchak’s Kids make up the bulk of the Lakers 11-man rotation. Luke Walton, Ronny Turiaf, Sasha Vujacic, Jordan Farmer and, of course, Andrew Bynum have worn nothing but Lakers purple and gold.

Over the past few seasons, because of a lack of veterans and injury-bugs, the young dudes played a lot of minutes, much more than most youngsters on Playoff squads. So much so, you might even call them battle-tested. It was this same component of the squad that irritated Kobe.

Every time you heard him give a sideline interview, he always commented on how young the Lakers were. This was always said with a hushed tone of frustration. We could also call it long-suffering. To be honest, for a player of his caliber (best in the league) and in his prime to to have shown the patience he has the past three seasons, is something that most pundits fail to recognize. Real talk: Kobe could have/should have started dropping hints at trade demands long before he did — albeit in a more professional manner. The Lakers were always solid and in Playoff contention, but I am one man that doesn’t think it’s unfair for Kobe to expect an organization of the Lakers’ stature to surround him with enough talent to compete with the elite squads. Kobe was fed up. No one in the organization was being especially proactive.

So what did he do? He trashed everyone.

From Day One, I thought this was a smart move, even though it was a punk move. By spewing vitriol and bile; by coming across like a fed-up, crazed girlfriend that can’t make up her bi-polar mind, Kobe forced everyone’s hand. He forced management to seriously look into upgrading the squad (trading him was never an option) and he forced his young teammates to man-up. Whether they did so out of spite and anger, or under pressure (“I don’t want to be the reason Kobe leaves LA”) doesn’t matter. What matters is that it seems to have worked. Had Kobe kept his mouth shut or demanded his trade like a gentleman, the organization would have moved forward with the same lack of urgency as before, especially the players.

Only a handful of players are self-motivated on the level of a Kobe Bryant, if any. Kobe is maniacal. However, almost every athlete in the league has that deviant amount of machismo and ultra-sensitive ego that drives most players to professional levels. The worse thing you can do to one of these athletes — other than question their sexuality or sexual prowess — is call them dookie ball players. Kobe saying ‘I want be traded’ is one thing. It’s a whole ‘nother thing if Kobe’s saying, “Get me outta here, man. You see the garbage ni&&as I got runnin’ with me??!?!!!” That’ll get some ‘I’ll show you’ attitudes and performances.

Each of the young dudes have now come back as demonstrably better players and visibly tougher men. Bynum, who receives the most pub, is almost ornery — a far cry from the demure, unassuming, unsure youngster from the previous two seasons. When Farmar and Bynum and Vujacic were in the game together last season, you expected the Lakers’ to start playing like a bunch of high schoolers. Now? Them dudes frequently straight impact the whole trajectory of games.

So it seems that it was Kupchak’s shrewdness and Kobe’s tough-love that are most responsibe for the Lakers standing in a position that contrasts much of their Western Conference opponents. Whereas LA looks poised to get better and better as each game/week/month/season passes, the current elite squads are poised for a decline, some have already started a slight descent. What this has done is move the Lakers that much closer to contention. Not only has the squad experienced a natural boost of an unexpected degree — thanks to the precocious development of the young players — but Dallas, Phoenix, Houston, Utah and even the Spurs, to a lesser extent, have not taken equalizing leaps. Don’t be fooled into expecting another second-half collapse, just because LA started off 23-11 last season and imploded down the stretch.

The gap, it appears, is closing. Barring injury, it is not unfathomable for the Lakers to be eyeing home court advantage in the first round.

They have a chance now and that’s all Kobe wanted to begin with. And that’s what Kupchak felt he was constructing if Kobe and the fans were willing to offer some patience.

The mighty, mighty West better take notice. A new crew is on the block and they’re smarter than they look.