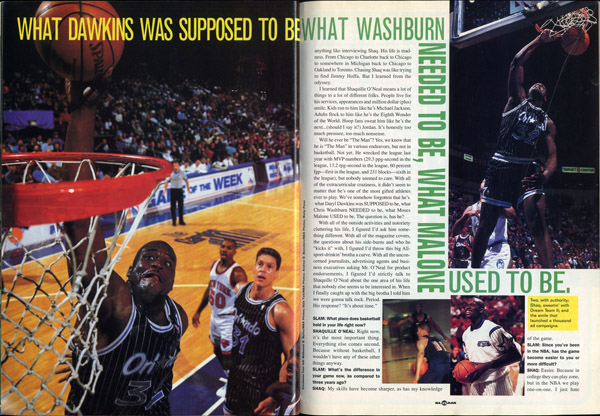 Now that Shaq’s landed a place to play next season, we thought now would be a good time to add this Scoop Jackson Shaq feature from SLAM 3 to our online archive.—Ed.

Shaquille O’Neal is large. Large in life, larger than life. Commanding space and demanding attention. He has certified gold(en) rhyme skillz and blue-chip status at the box office. For Reebok, he’s paid. For Pepsi, he’s paid. In two years, Shaquille O’Neal has gone from phenom to icon. He has redefined the American mythology of superstardom. Never has a young black man (with the exception of Eddie Murphy) gained so much fame in so short a period of time. Rule: Be young, have fun-be Shaq.

But you can’t really know the magnitude of Shaq until you have to interview him. We first hooked up at the World Basketball Championship practice facilities in Chicago. I was told that I had 30 minutes and Shaq knew I was coming. Cool. I walk in. Spot largeness.

“Heard you’re down for the interview.”

“Yeah, let’s hook up after I go to the pool and stretch out.”

It took Shaq three weeks to get out of the pool.

Over the past four years, I’ve had the fortune of writing stories on a variety of people: Spike Lee, Tom Cruise, Magic Johnson, Chuck D., Mike Tyson, Charles Barkley, Elvis…just joking. But never have I been through anything like interviewing Shaq. His life is madness. From Chicago to Charlotte back to Chicago to somewhere in Michigan back to Chicago to Oakland to Toronto. Chasing Shaq was like trying to find Jimmy Hoffa. But I learned from the odyssey.

I learned that Shaquille O’Neal means a lot of things to a lot of different folks. People live for his services, appearances and million dollar (plus) smile. Kids run to him like he’s Michal Jackson. Adults flock to him like he’s the Eighth Wonder of the World. Hoop fans sweat him like he’s the next…(should I say it?) Jordan. It’s honestly too much pressure, too much nonsense.

With all of the outside activities and notoriety cluttering his life, I figured I’d ask him something different. With all of the magazine covers, the questions about his side-burns and who he “kicks it” with, I figured I’d throw this big All-sport-drinkin’ brotha a curve. With all the unconcerned journalists, advertising agents and business executives asking Mr. O’Neal for product endorsements, I figured I’d strictly talk to Shaquille O’Neal about the one area of his life that nobody else seems interested in. When I finally caught up with the big brotha I told him we were gonna talk rock. Period. His response? “It’s about time.”

SLAM: What place does basketball hold in your life right now?

SHAQUILLE O’NEAL: Right now, it’s the most important thing. Everything else comes second. Because without basketball, I wouldn’t have any of these other things anyway.

SLAM: What’s the difference in your game now, as compared to three years ago?

SHAQ: My skills have become sharper, as has my knowledge of the game.

SLAM: Since you’ve been in the NBA, has the game become easier to you or more difficult?

SHAQ: Easier. Because in college they can play zone, but in the NBA we play one-on-one. I just hate zone defense.

SLAM: Where do you feel you can dominate most effectively, on offense or defense?

SHAQ: Both. It really depends on the game situation. I can dominate on the offense and defense.

SLAM: What about when “blonde ambition” (Dennis Rodman) held you scoreless in that last quarter in one of last season’s games against San Antonio?

SHAQ: I just didn’t have the ball enough at the end of the game-and it’s hard to score without it.

SLAM: Is he that good defensively, or did you just have a bad quarter?

SHAQ: Dennis is definitely one of the best defensive players, but…

SLAM: Where do you feel you have room for improvement in your game?

SHAQ: On the free throw line. But there’s always room for improvement in everybody’s all-around game.

SLAM: How hard was it for you to adjust to the defense (and defensive strategies) in the NBA?

SHAQ: It’s something that every rookie has to go through. I was no exception. But it all gets better with time.

SLAM: What do you feel separates you-skillz wise-from Hakeem, Patrick and David?

SHAQ: I think I’m more of a power player. My game is in the paint.

SLAM: Explain what happened to the Magic in the playoffs.

SHAQ: We just got beat by a great Indiana team. But trust me, it won’t happen again this year.

SLAM: What do you think the Magic need to win a championship?

SHAQ: Well, we got Horace Grant (from the Chicago Bulls) this year, and that definitely will help. The team just needs to stick together.

SLAM: What did the overall success of Dream Team II mean overall?

SHAQ: I’m happy for myself, my family and my friends to have been on the Dream Team II. All that really matters-and I’ll probably remember most about the tournament-is that we won a gold medal.

SLAM: Have you gotten over not being on the original Dream Team?

SHAQ: Yeah, I was happy for Dream Team I.

SLAM: How good is Alonzo Mourning?

SLAM: Who do you think is the best player on the squad, including yourself?

SHAQ: I don’t know. You’ll have to ask the coach.

SHAQ: They are both great point guards. Chris is a little more offensive-minded, but both can make incredible dishes. I’m lucky.

JULY, AUGUST, SEPTEMBER—and it don’t stop. Shaq took about four days off, played the ghost role, and then it was off to L.A. and 10 hour days, thanks to a Reebok commercial shoot. Yo, Calgon take him away! How long will the shoot last? They say a couple of days. I know better. Shaq and his boys, Dennis Tracey and Ken Bailey, knew better too. Away from basketball, but still on top of it. Shaq breaks down the rules.

SLAM: So how do you stay on top of your game?

SHAQ: Training camp and preseason is where I really get my conditioning. And during the off-season I try to eat right and work on my individual skills, so it’s important. I don’t feel that I have to prove myself to anybody, but the people I play against had better respect me.

SLAM: So what team goals have you set for the future?

SHAQ: I’d like to win a championship before I leave Orlando.

SLAM: Does it bother you when people question your intensity?

SHAQ: No, because I know I play hard every game. I just don’t worry about what other people say.

SLAM: Everybody is talking about the style of play changing in the league. What are your feelings and do you feel your presence has anything to do with that?

SHAQ: Man, I really don’t think about all of that stuff. I just go out there and play hard. All these other things will take care of themselves.

Then I hit him with the bomb…

SLAM: Have you ever wished you were a point guard?

SHAQ: Who says I’m not? I have a better handle than Isiah Thomas. The coach just won’t let me show it. (laughs)

I expected him to say some shit like that.

AFTER DOING THE “bicoastal-intercontinental pool tour” with Shaq, I feel different. I feel honored, yet I feel concerned. I’ve watched too many people try to do too many things at the same time—and lose it all. I’ve watched the media and corporate companies build young black athletes and entertainers into demigods, only to watch them fall. In the ‘hood we call it a damn shame. Shaq told me in Chicago that it was going to be tough interviewing him because of his schedule. But he promised, “I won’t let you down.” Brotha to brotha, I trusted him. And it’s always the ones you trust who you seem to worry about the most. Shaq’s like that. He’s the future of a new generation—but not just those who drink a certain brand of soda. He seems focused and centered. This is a rarity. After two years in the N.B.A., dealing with all of the outside projects, media b.s. and business endeavors, basketball is still his life…and he knows it.

I told you he was large.