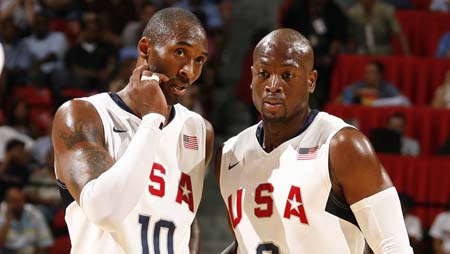 There’s more at stake this summer than whether or not America can still play basketball. As we’ve learned over the last few years, participating in USA Basketball isn’t a favor to this country—it’s a calling, a duty, a direct reflection on how much these guys love the United States of America. Unless your name is Kevin Garnett, refusal to take part is subversive activity, akin to voting against the Tenth Amendment in a time of war. At the same time, guys like Allen Iverson can practically beg for the chance to rep their country again, but be denied if their patriotism could be called into question.

So while the Redeem Team fights to restore honor to the NBA, there rages within its ranks an internal struggle to see who will emerge the biggest patriot of them all. With this in mind, we present the Portraits in Patriotism, your one and only source for updates on just who is ahead in this all-important battle of honor, valor, and completely subjective views of what makes an American an American.

LeBron James: Americans love underdogs. The Constitution was written with rented pens. So a gold medal guarantee from the prohibitive favorites’ best player, that’s just creating the illusion of adversity. Hillary would be proud. Same with passing out headphones to teammates who could afford the gear themselves. Keep everyone hungry, humble, and feeling under siege. There are enemies at our gates and Braveheart was the prequel to The Patriot.

J.R. Smith: Named to the Select Team, which is where you put the kids talented enough to scrimmage with giant dawgz, but lack the clout to refuse a red, white and blue phone call. Case in point: The lesser Lopez brother (I think). Or are like Kevin Durant, who is too darn polite to turn anything down. Anyway, this is a major coup for Smith, who with this has officially gone from eff-up to reformed young man on the path to recovery. It doesn’t matter if he never follows through on all that drool-inducing potential, but from now on, he’s certified. Like three-quarters of this country likes to beg for forgiveness or confess relapses or pay too much for therapists. A stumbling brat no longer, Smith’s now a man on the mend—even if the process lasts forever.

Carmelo Anthony: Dude said this: “The Olympics is about sport to me. It’s about football, what they call soccer over there, basketball and all the other sports going on. I don’t think it has anything to do with politics.” Like the kids say, that just ain’t right. First off, no real flag-waving icon would ever even admit that some people call soccer “football.” Speaking of flags, Melo has the Puerto Rican banner on his hand. I know that’s like a U.S. state or something, but it has its own team. What’s he doing on ours? This is all very suspicious. And then he caps it all off with denying the politics connection. Wise up son! If we lose, they win. What about that doesn’t influence elections?

Dwight Howard: It does not get any more simple than this: Dwight Howard is the primary front in the basketball war on China, our host and therefore our greatest enemy, since they’re the bad guys most readily standing in front of Team USA. Yao is the undisputed king of Chinese basketball, Dwight is the only big man on the squad. China simply cannot be allowed to defend their home soil. That would be like invading a country and then having to cut and run. I don’t really know what it means if Greece wins, but I hear we have some issues with China. So Howard/Ming is the closest we’ll get to the great USA/Russia Cold War games, until the Taliban takes the burka off the basket.

Chris Bosh: He lives in Canada and, when asked if he could live and play overseas, said this: “I think I could. I’ve always wanted to travel the world and experience another culture. That would be pretty interesting. You might want to come home after it. But I’m sure these guys who go over and after they’re done they look back at it and had a lot of fun.” Good thing he’s from Texas, or else we’d know we had a spy on our hands. I also hear he wore a dress in a YouTube video, or a wig or something. What? He made fun of used care salesmen? Excuse me while I order a Raptors #4 jersey with JUDAS ‘cross the back.

Kobe Bryant: I’ll let you in on a secret: This man is actually a government weapons project that escaped, made the NBA, and got in some trouble because he was trained to kill and explode, not talk smooth. He’s like Wolverine. Or Jason Bourne. Yeah, Jason Bourne. It would take that discipline to put up with Vanessa. Who happens to be of Commie extraction, which means KB24 might be compromised. . . hold up, I have a text message to send.