The League Admits That Orlando Got Screwed 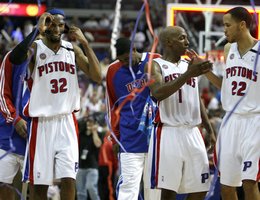 It’s not often that the NBA publicly acknowledges that they got one wrong, especially under the ultra-intense glare of the postseason.

After much hand-wringing following Game Two of the Magic/Pistons series, the League admitted that Chauncey Billups’s long three to end the third quarter should not have counted.

“After reviewing the video of last night’s Pistons-Magic game, we determined that the play that concluded with Chauncey Billups’ three-point field goal at the end of the third quarter took approximately 5.7 seconds.

Because there were only 5.1 seconds remaining in the quarter when the play began, the shot would not have counted had the clock continued to run.”

Chin up, Orlando. That’s a moral victory. Those count, right?

The good thing in all of this, is that the gaffe might lead to an expansion of the use of instant replay in similar situations.